A Race and A Ride

Saturday started out badly and somewhat set the tone for my day.

I went to pack my Garmin and it was DEAD!  Nothing!  Dead!  No data!  Would not charge!  Dead!
This threw me so much I never thought to take at least a watch with a stopwatch feature or my lap watch. The miles in my race were well marked and this would have worked fine.  I really really wanted the Garmin for my bike ride and I was very upset it wasn't working. I threw it in the car so I could stop where I bought it on the way back.
A ways into my trip to the race site (almost 2 hours away) I remembered that I left my peanut butter English muffin on the counter.  Now that sucked as it is what I always eat before a race.  Plus I couldn't stop thinking about my stupid Garmin. So many many negative thoughts on the way to my race in spite of a beautiful day!
Once I got there I was a bit surprised at this small town race. It was well organized and well attended.  I still was missing my Garmin particularly in anticipation of my bike ride but I decided to get over it for now. 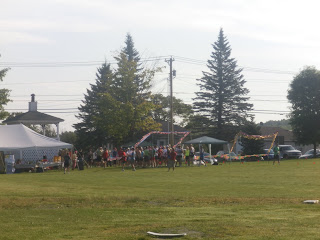 The start of the 20K and the walking races.  There are
two arches to come through and we got VERY strict
instructions as to which one to finish in or be disqualified.
The 20K runners and 5 and 10K walkers started at 8:30.  The 5K and 10K runners began at 9:00.  It was hotter than I thought it was going to be and the course was what I would call hilly.  (This didn't bode well for the future bike ride.)  There were a lot of people racing the 5K but once we reached the turn around the crowd really thinned out.  I was glad to finally reach our turnaround. I had no idea how I was doing but felt like I was racing at a half marathon pace, not a 10K. In spite of feeling that way I chose to do nothing about it!  I passed a few people and one man stopped running with his friend and sped past me.  Then I started hearing rapidly approaching footprints........from some of the 20K racers!  Wow!  They were fast and all of them were drenched with sweat. 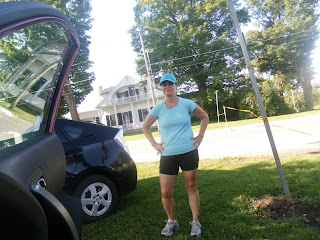 Before the race sporting my new LuLu shorts and hat! Loved
the hat with the key pocket. Perfect for going to a race
alone!
The course was pretty.  You could see Jay Peak in the distance which is where Vermont's northernmost ski area is.  When I finished I had no idea what my time was.  The lady said to the timer: 1:13.  What?  I know I was slow but 1:13.  (And I mean slow for me everyone ahs their own fast/slow times) No way.  Man, what am I doing to slow down so much.  Well, I hung around next to the timers for a second and then took a peek.  I was #113 to come in (counting several races) and my time was 1:00:42. Still a PW but way better than 1:13.  It averaged out to a pace of 9:48 which is how I felt.  I just didn't have it in me.  A small part could be that I have been biking or running or both for about 10 days now. But truly I don't think a day of rest would have made much difference. I was just plain slower than usual.  A lot slower. 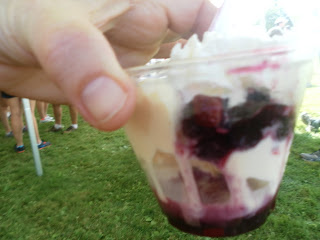 I hung out for awhile, had some goodies including a blueberry sundae.  There were lots of prizes but I was 2nd in my age group and not first so I didn't think I would be getting one. There may have been only two of us so it was no huge cause for celebration. I wanted to get going on my next adventure so off I went on my bike to try out my husband's suggested route.


I must say I didn't have the delight in this ride I have had in other more recent rides. I was hot and tired.  It was the hilliest ride I have done this year.  It was pretty but I've seen a lot of pretty lately.  My directions were fairly easy to follow. I used distances on road signs to figure out my mileage.  There was one stunning view when I came upon Lake Willoughby.  What a treasure.  There was a nice beach there that had several people at it. 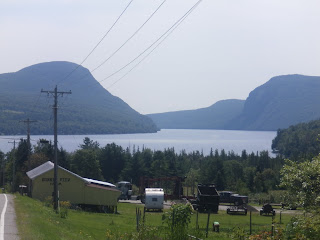 You come up over a hill and see this ahead. Stunning. 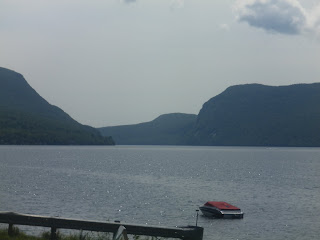 This would be a great place to spend an afternoon.


I knew I had a lot left to ride but I wasn't sure how much.  Truthfully had someone I known come by with a truck I would have happily thrown my bike in the back and called it a day. But I didn't have that option.  I gave myself permission to walk up two hills but I never did.  The last section was a repeat not part of the loop and I knew there were two killer hills.  I dreaded them way before I got there.  Once finally there the first one was everything I dreaded and then some.  But the final hill didn't seem like much at all. I was finally at my car.  But instead of going home I headed to the store where I bought my Garmin. They gave me some suggestions and last night I did end up fixing it, pretty much like fixing an Ipod when it freezes. It is completely fine now.  But while at the store I bought a computer for my bike and had it installed.  I HATE not knowing my mileage, the computer tells me many other things and I have been wanting it for awhile. Let's call it a birthday present to me.  Or was the bike rack that?  (Which I am loving!)  All I know is that biking is a money sucking activity, running is much much cheaper!


Today I had just an easy run with T.  The bike is parked for the day!  Let's all have a good week. It is still summer after all.
Posted by ajh at 6:38 PM

This reminds me, the battery in my bike computer is DEAD so I'm totally dependent on my Garmin for bike speed/distance data right now. I should do something about that before my tri in two weeks!

Sorry your day didn't start out very well, but it still sounds like you did okay at your race. Your 10K PW is faster than my PB. It's all relative. :-)

I agree with Lisa...I haven't done a 10K, but I would be happy with that time. It's funny how hard we are on ourselves.

Consider this a training run/bike ride.
Isn't it amazing how attached we get to our Garmins? I have stopped using mine but talk about withdrawal syndroms.
And that blueberry sundae looks very, very tempting. I love blueberries. Yum.
Hopefully you can take a break for a day or two.

Grr, nothing worse than a dead Garmin on race day. Do you know how to reset it? I;ve done that a few times with mine. I don't remember now how to do that but if you google reset Garmin you will find instructions. Good luck!

Oh I sympathize with having a dead garmin on race day. Heck any time. Mine periodically just dies and requires a reset which is usually just before I need to download a bunch of runs. Then I sort of want to cry. Definitely love/hate relationship.

re Garmin: it happens. Learned how to hold down the two right buttons to do the master reset. (which doesn't erase old runs, normally)

You have been training like crazy, so it was just an off day - no worries!

Once again a great, scenic ride! So good you got a computer for your bike. It's fun knowing your speed & distance.

Maybe it was the heat, too? I'm always slower when it's hot. And surely your non-stop motion affected how you did.

That happened to my Garmin too and I had to reset it. Great job racing and biking in the same day!

I've had my Garmin freeze a few times and it annoys me no end. It sort of feels like if I haven't recorded the run then it didn't really happen - stupid, I know.

Nice run even though you didn’t feel great. Nothing wrong with that 10k time. I must be honest this is one of the reasons I am not interested in ever getting or using anything more than Start/Stop. I'm sure a bit of rest will bring back all your energy and you'll be stronger from all the training. Have a good week!

Sorry that you had a tough race followed by a tough ride, but way to push through both!! Glad you treated yourself to a bike computer - the amount that you ride, it will be well worth it!

I've never done a 10K but it seems hard to know how to run - fast like a 5k or slower like a half. I think your time wasn't bad & it was scenic & you got a sundae!!

That would have pissed me off too to start a race day like that. It just wasn't your day yesterday, it happens and I'm sure your next race will be great again.

I'm proud of you you still went on that bike ride, I would have packed up and go home :)

Sorry the race didn't go as you had hoped...I'm seeing such slowness in my pace and I know how deflating it can be. Hopefully you'll get back on track here quickly!

Um, I've never had a blueberry sundae at a race before...jealous!!

I agree, biking sucks the bank dry, holy cow is it expensive. But fun, right??

Sounds like you had a rough morning. I've learned that I need to eat something before runs or else my pace suffers a lot. I'm sure that, plus the hills had an impact on your race time. Glad you got your garmin working again and a nice computer for your bike.