I Couldn't Do It

Yesterday I posted:  I have another run scheduled for tomorrow and my biking friend asked me if I could go biking again and I didn't even hesitate.........YES!  I don't know when I will fit the run in, it is a busy weekend with some more spectating coming up but I'm not going to worry much. I want another bike ride.


Yes I got up and biked with my friend but I also did the run after I got back. It was 11:30 by the time I went - so not my time of day - but  I did okay and it is done!  I knew if I didn't do it I would try to fit it in tomorrow and I don't want to do that. I want to enjoy Em's race without worrying about my working out.  And I need a rest day.  The last complete rest day I had was August 3 just before I went to DC. I have either biked or run or both every day since.  I am looking forward to nothing (except walking all over creation to try to spot Em in her race) tomorrow.


Today we did a ride that included a small part of one I did last week. 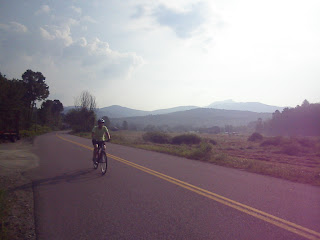 Camel's Hump is behind me, a bit hazy and hard to see.

The first part was on a busy road (for around here) with no shoulder at a time of day that people were going to work.  It was not fun.  We were all business here - ride fairly hard, no chit chat - just get to the next part.  About 12 miles later we were there and it was heaven.  No traffic, scenic and easy to ride and chat.  C was very impressed with this road and kept talking about how much she liked it.


Then we turned right instead of left and headed toward Route 17. This was a great road, not a lot of traffic and once again pretty.  We saw a lot of these guys who I thought at first were llamas but they were alpacas. I am not sure of the difference but they were kind of cute. 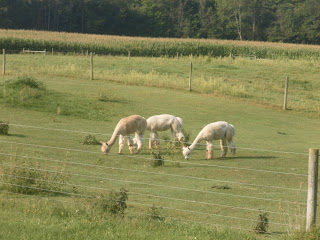 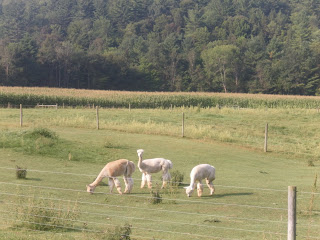 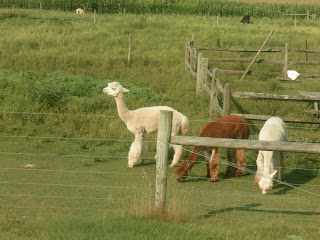 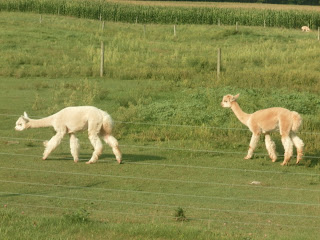 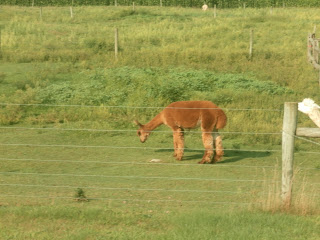 When we finally got to Route 17 which goes over a mountain to some local ski areas we thought we would be going down because we had already climbed. Well, not so much. We had a couple miles of climbing to do even though we were going "down" the mountain.  It definitely was the hardest part of our ride especially mentally. 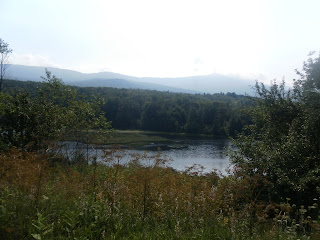 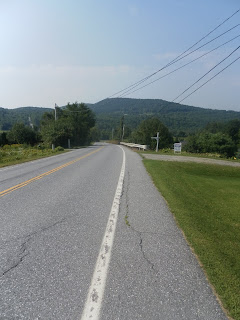 But what a sweet reward once we finally got to the top of this section because then it was several miles of downhill!  I am generally coming up this road so it was a nice switch to be going down it.  We were back where we started with 38 miles under our belt for this ride and it was only 10:30.  Yes! 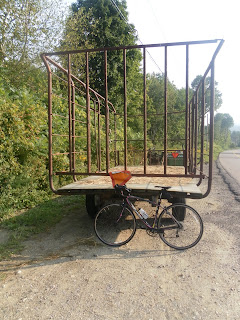 When nature calls in VT you
park your bike by a hay wagon.

Once home I had a couple of choices.  I could go into work but Lindsay told me:
I hope you are taking your last optional day OFF! I sure would :)
and it sounded like good advice to me so I went for that pesky run I was thinking about instead. 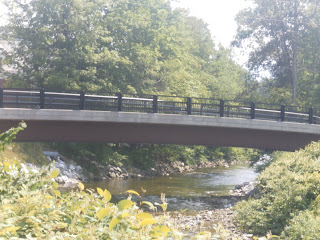 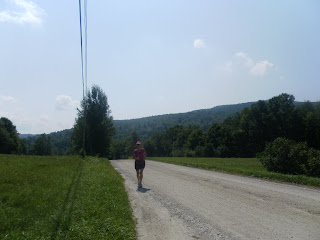 Somehow I got through this run after a long
bike ride. Yeah I have a day off coming up!

What the heck does your title mean?? I don't think there's anything you can't do!

I'm glad you had such an awesome last "free" weekday!

Wow you are hitting the workouts hard! Enjoy spectating this weekend.

You rock! Sounds like your bike ride was awesome! Hope to see you soon!!

You just keep going and going!

You are going to miss that bike come winter...you'll have to get a trainer! Nice bike/run girlie...enjoy your weekend watching Em, a much deserved day off!

The alpacas are so cute. They have eyelashes to die for.
Great ride and well done on getting the run done too. I'm sure it's easier to be inspired to workout with all the triathletes around.

when I saw the title of your blog come up, I know exactly what it was going to be! Glad you got it in - I totally understand the feeling of just wanting to do it so you can get it off your mind.
Enjoy Emily's race and have a great weekend!

Glad you are enjoying your bike adventures! The photos about those alpacas are really interesting :) I have never seen them and I have shoved them to my daughters.
Have a nice weekend!

I had a feeling you were talking about your run in your title :) ...you are such an inspiration! Have a blast cheering Emily on...I'm sure she'll do great!

The alcapas are so cute!

You make the title of your blog so worthy: you rock! Great going on the bike ride and the run afterwards.

Enjoy being a proud Mom today.

I'm just wondering when you're going to sign up for your own IM? : )

You don't see alpacas every day that's for sure! GREAT workout!

i'm glad you took advantage of your last day off! :)

You are working hard! I have never seen an alpaca "in person".
Beautiful places to ride and run through.