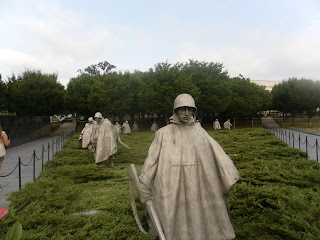 Sunday may have been my hottest run yet.  I also had a little GI distress and had to find a couple of bathrooms stat!  Other than that I had a great run - def. can find my way now and love the route I am taking.  I always take the time to visit one memorial. 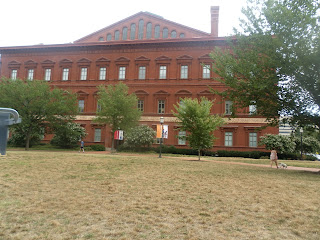 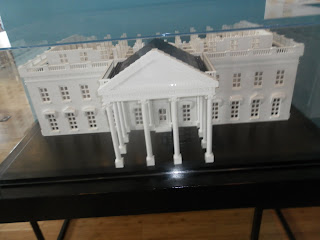 Part of a Lego Exhibit (why I wanted to go but not
that good, I liked other exhibits more) 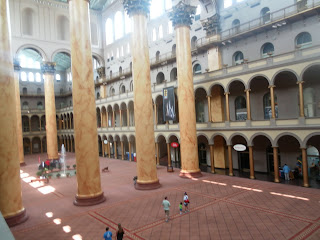 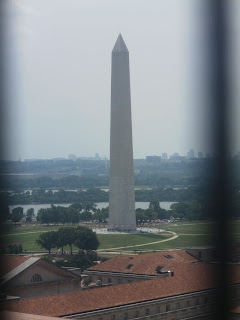 From the tower in the postal building 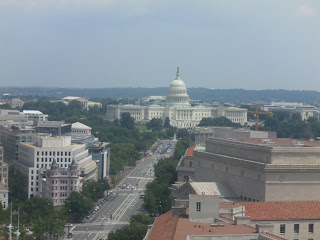 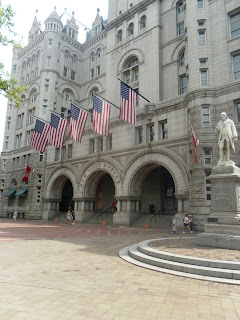 Then Emily and I continued on to the zoo.  We don't let any grass grow under our feet!  We checked out the pandas, all the big cats, the elephants and the apes.  And as you could guess Happy Trails by mutual agreement we skipped the reptile house.  There was thunder booming all around and it started to pour. We first avoided the rain by spending some quality time with the panda who showed her appreciation by putting on a little bit of a show.  When we first got there she appeared dead but soon she rolled off her rock and began scratching and playing around.  There were a lot of "Ahhhhs!" 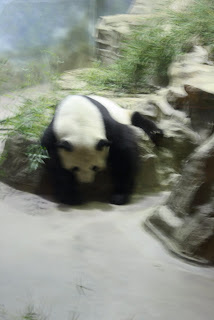 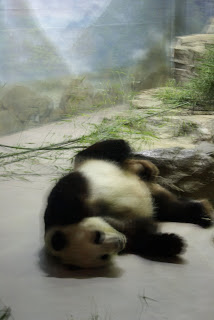 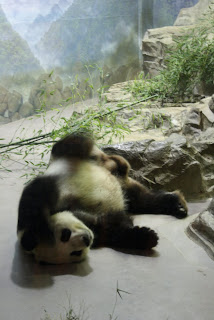 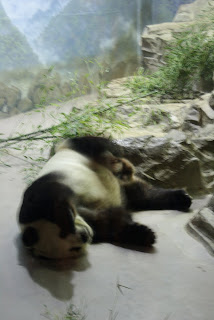 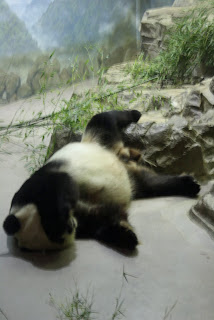 My personal favorite.
Then it was on to the apes where we spent at least 30 minutes.  There was a baby gorilla and mother who was great to watch.  The other gorillas not so much.  Are you aware they eat their sh** and then vomit it and eat it again. Over and over and over and over.  Let's get back to the cuteness of the baby gorilla. 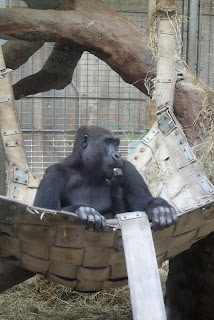 Mom and baby - see the arm 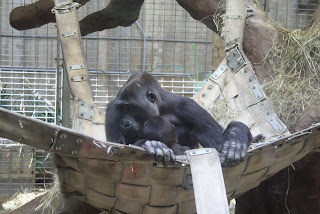 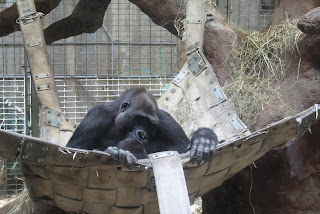 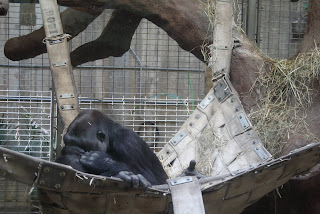 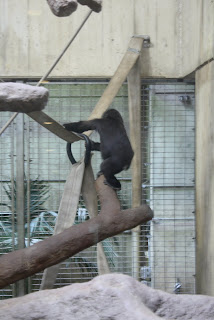 And he's off climbing 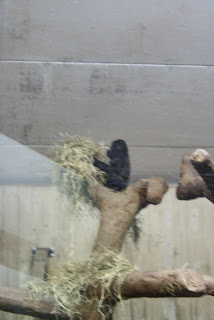 He kept picking up the hay over his head and
shaking it as if he was going to throw it.
He never did but we were worried
he was going to fall.  His mom had faith in
him though as mothers should. 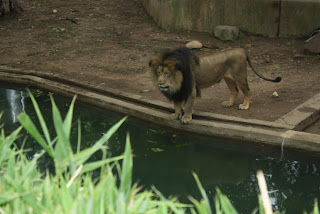 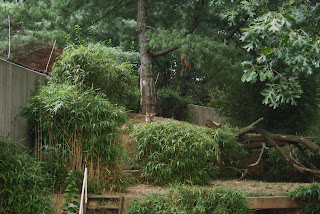 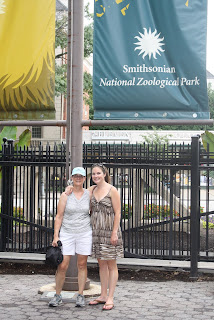 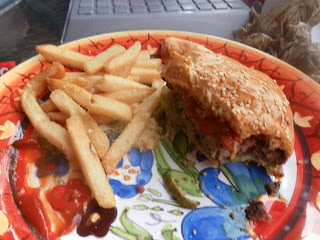 And I think I already mentioned the Upwords tally
but some things bear repeating.
AJH 3
Emily 0
Rocketship 0
But who's counting?
Posted by ajh at 1:09 PM

Looks like a fun day. I've never been to the DC zoo. The panda pictures are so cute!! And great job beating Emily and the Rocketship!

Fun, fun, fun! The primates are always a hoot to watch. The panda sure was neat, too. Disappointed, though, that you avoided the reptiles. Chicken!!! Oops - the REALLY BIG snakes are fed chickens - smart move on your part on staying away! Ha, ha - we know we can tease with you! :-) So glad you keep having fun. Hope you keep your competitive edge going on Upwords. Are you remembering to cool down properly afterward in preparation for the next bout???

What a wonderful day...and awwww for sure :)

I have never gotten to hear a big cat roar! That's so cool! I am totally grossed out by gorillas now, though, so thanks for that.

I love the zoo. Animals are just so awesome. Looks like a great day.

Zoos are my happy place. If you ever get over here, Taronga zoo in Sydney is really worth a visit.

And good work with the Upwords. Gotta keep the young ones in their place!

I can remember going to the National zoo back when I was in 7th grade or so. The pandas were our favorite part because we don't have any at the St. Louis Zoo.

Did I say this already on one of your other posts? I feel like I did, but in case I didn't...I'd love to go to some museums alone instead of trying to get my kids to maintain a little attention/semi-appreciate what they're seeing. The Abraham Lincoln Presidential Library/Museum in Springfield IL would get my first solo visit. We've been there once and I absolutely loved it, but I missed a ton in the push to get through.

Thank you for the very nice comment. My only guess with the sleeves is maybe the fact that they offer you a little more protection from road rash in case of a crash? That could be totally wrong, what do I know? I do know that it'll be good justification to give my husband for me to buy a new jersey. Of course, he'd prefer I didn't race, so maybe I won't bring up the whole new jersey thing...

What a fun day! For some reason, I always like visiting a zoo when on vacation. I love seeing all the fuzzy animals! :)

Awesome day indeed! YAY. I went to the zoo there when I had to go to DC for work...man, that had to be a thousand years ago - I know I didn't have any kids at the time (and my daughter is a thousand years old. hehe). I LOVED seeing the pandas, but I don't think they were active, just sitting there in a corner. A cool experience nevertheless! Looks like you're having a fantastic visit! :)

What a wonderful day! I love to go to the Zoo every now and then, especially the one in Holland where Bella can come too.

I am loving all of your posts from DC! I am going there for work in 2 weeks and will have about a half day to cram in some sightseeing. I am thoroughly enjoying the preview of things to come. :)

Love the pandas and your pics. They may run fast but you rock in the game category.

also I saw Crazy Stupid Love based on your recommendation - totally enjoyed it.

the panda bear is so cute! yum for the burger : )

I was just reading Emily's recent post all about you. You are awesome, you know that???

oh my goodness. how fun! the pandas and gorillas are sooooo stinkin' cute!