What's the matter, honey, did I break your heart? Or TTT 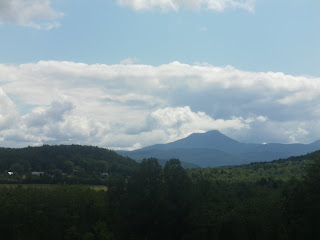 Camel's Hump, seen many times throughout
my ride is one of our tallest mountains at a
height of 4,065 feet. Okay Colorado buddies stop
laughing.

1. Another great ride today!  I had a car appointment and decided to try a new route after it.  I love doing the loops in my book as I don't quite trust my mapping skills to find my own. I almost ditched it and went home as I was afraid too much of the loop might be familiar.

It starts out climbing but then the book states that the main climbs are done.  Huh!  Nice thought to have but later I absolutely disagreed. 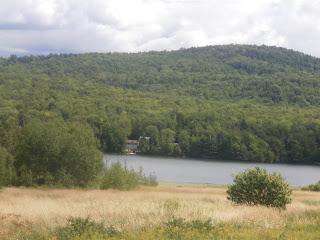 There was just a short amount past this lake that
is a bit of a hidden treasure. 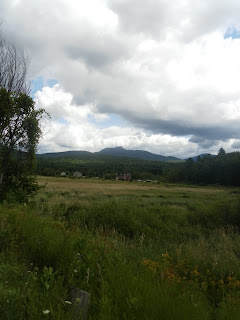 Camel's Hump is getting farther away but I can
still spot it at times. 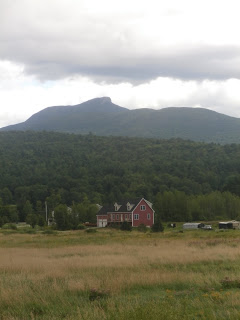 Wow! How did that happen?  Now it is right
in front of me.  I turned soon and the valley I rode
through was gorgeous!

This was a nice ride through various valleys with mountains to look at as well as one lake.  Most of the roads were new to me as either a rider or a driver. I did end up doing a small part of my duathlon course in the middle of the ride.  One thing I liked about this ride was most of the climbing was in the beginning or the middle and the end was a long downhill!  Yes!  It was a cloudy day so the pictures aren't spectacular but it was nice not to have it too hot.  Another 30 miles done, 64 in two days. I don't know how some of you do that and more in one day.  30 seems to be a good amount for me. 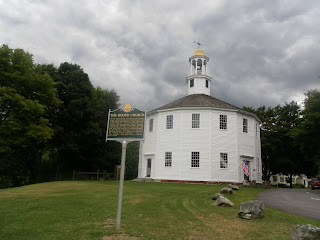 The ride ends back at this Round Church. 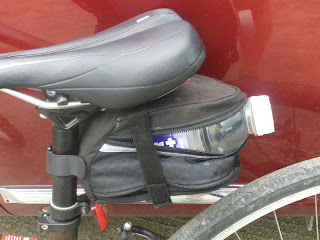 Today I managed to carry that second water but then
I didn't need it. It felt like the humidity was 0%! Loved it.

2.  As I was cruising along minding my own business a large gravel truck went by me and laid on the horn???? I wasn't in the middle of the road. No one was coming in the other direction.  What was his problem?

Did his doctor tell him to exercise and he doesn't want to so he hates people who do?
Did his wife leave him for a biker?
Did I break his heart in an earlier life?

It was so unnecessary and rather unnerving. Share the road, fellas!

3. I want to be paid for biking and exploring new routes in Vermont. Is that possible?  And once I am back in school how will I possibly fit biking and running?  I love fall in Vermont and I want my main focus to be the bike. I am going to be doing some races but I am going to see if I can have at least one weekend day centered around riding. But if I have a race on Sunday that will be tricky.  I already know of at least two weekends where it just won't work to get a lengthy ride in. I'll figure it out  and just appreciate what I fit in.  Right, that is why I am already worried.

4. Reading - back on those serial killers. I am in the fourth of the series by Linda Castillo, Breaking Silence. I'm watching, Damages - Season 3, also not a real feel good, restful show!

I went solo to my reunion bc Jeff was at scout camp with our youngest. It worked out ok. He's kind of shy and quiet, so it left me to socialize without worrying about him being bored.

I would've jumped so high if that trucker had honked at me like that. I haven't ridden more than 33 miles at a time this year. I'm thinking that century ride just isn't going to happen this year; I just don't have time to put in the miles. I hear you about training time when we go back to work. Too bad I can't work part time!

So envious of your scenery!
Must be really nice ... :)

I think the gravel truck driver must have been worried that you mightn't notice little ole him and thought he'd better let you know he was there. Loser!!

oh those dang cars!
looks like a gorgeous route, makes me want to hit the road!

Cloudy day or not, you're photos are always so much fun to look at because it's so beautiful where you live.

I know what you mean about your worries for the running and biking. I'm struggling very much with that too now everything is back to normal at work and I'm kind of busy and more tired from my workdays. I'm constantly working on my workout schedule but haven't found the perfect solution yet.

Thanks for the book tip, I looked her up and her books look good, going to add it to my book wishlist.

Ah, the figuring out of the workout plan - what a struggle! At least it keeps our middle-age minds busy and staves off dementia (I hope!)
Boo to that trucker :-(
As always, great pictures!

We thought about doing a biking / running Colorado book - that would be sort of getting paid to ride and run :))

You are loving the riding so much and looking at your pictures it is easy to see why. Beautiful! I think I'll enjoy running in Vermont. I live and train at about 6500ft so I'll enjoy that aspect too. I'm also working on ideas around a book.

How scary with that truck.
Such beautiful rides these days...I'm focused on running because of marathon training, but love my bike rides when I can :)

I have been wondering myself how to get longer rides in on the weekend. Always have a long run or a race to worry about.

UGH to the truck and horn. What is wrong with some people??