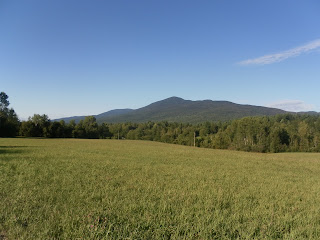 This is what I see when I go the shorter way.
Running
I had a TERRIBLE run on Sunday for many reasons.  Monday was better and today's was the best yet. The last two mornings have been rather nippy. It was 44 degrees this morning - I wore long sleeves and a jacket!  I was supposed to do a tempo run but I don't know if I would have gotten out of bed for that so I didn't follow the plan came up with a better idea and ran a Fartlek.  It went very well and I came home refreshed.


Biking
I had done no riding since last week when I rode a weekly high of 112+ miles in just 3 days. It was an awesome week for biking.  Tonight I just got on briefly and rode a mere 11 miles. But it was a beautiful afternoon and I got out there. There are two places I can make my shortest loop a bit longer and I took one of them but not the second. And that's okay!  But I got a terrible cramp in my left calf.  I have never gotten cramps running. It didn't last long but it surprised me. 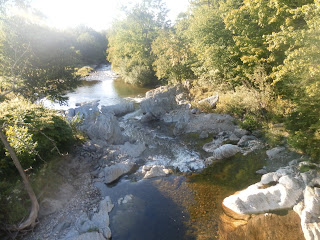 I go over  a bridge and see this swimming hole on many
of my runs and rides.
The above swimming hole has many old stories but I will share two quick ones.
Once I was minding my own business reading while sunning while four teenagers near me were carrying on about something.  I got up after a bit and went swimming.  When I came out one of the girls said to me, "You're brave." "Why," I asked.  "Well, you went right in there and swam with a snake in the water."
How long do you think it was before I swam there again?
Another time an Ironman I know got a blood sucker on her foot.  I was across the river and it took me a bit to get to her.  Meanwhile I thought somehow a shark had gotten into our freshwater river and bit her leg off from the way she was carrying on.  But nope, just a bloodsucker.  Truthfully they are truly gross and I don't blame her one bit.
Work
I have been at a math course the last two days. It will continue about once a month through January. It was truly exciting and enlightening.  The instructor was awesome. I have had her before but it has been awhile and I forgot how much I liked her.  I have already learned a lot and am really getting up to date on current research and the new Common Core.  Our country is heading in a new direction. At least most states are on board. Goodbye to NCLB by 2014!  Woot Woot! This course centers on Fractional Reasoning and I have been doing a couple of things wrong. Imagine that!  It was pretty scary what many  middle school students do not know.  I can't wait until it is time to introduce this unit and then continue to incorporate it all year.  There were teachers there from K to 8th grade. We had great discussions and looked at lots of students' work.
I loved that I didn't have to be there until 8:30 even though we went later in the day. I could get that morning run in.  The rest of the week I have to be there at 8 and I am going to see what I can fit in.  Once real school starts I almost never get it done in the morning. I always say I will once a week but it doesn't happen.  I will shoot for twice a month and we'll see. I am better in the spring when it's light out but as it gets darker in the morning I just don't get out there. Especially when it involves scraping off my windshield in the winter.
The teacher sitting next to me in the math course shared with me that another colleague had shared with her about my running in my helmet story.  Great.  The more people - especially those I work with and need to have respect from - the better, right.  Missed it?  Too bad. I'm not supplying a link.
Posted by ajh at 7:10 PM

Ha, ha, ha!! What a thing to be "famous" for!
My guess is you never went swimming in that swimming hole ever again after the snake thing. Blech! I wouldn't blame you.

That helmet story sure gets around, doesn't it??? And snakes in the swimming hole are certainly a drag!

In answer to your question, not only did you read it correctly (he raced PPA), but then he left Leadville at 1:30 am, drove to Buena Vista, and started the TransRockies race at 7 am Sunday.

Um, I'm certain I'd never set foot in that water if I had been in there previously with a snake. And the blood suckers make me vomit - bleh!! I kinda like my pool at the gym :).

Oh my gosh, both of those stories are hilarious! I'm so much happier not knowing what's in the river with me.

I'm really excited about Common Core. It just seems like it makes sense.

Weird that you got a calf cramp riding. And bike cramps I've ever had were in my quads...and I think a case of not enough electrolytes on hot long rides. I'm having a calf issue too though. My left calf has a pretty large bruise and I have no idea why. It's not an easy place to hurt yourself. It's like where I could've banged it on a pedal, but I haven't been on my bikes in like two weeks. Anyway, weird.

Ha, love the stories of the swimming hole. I love swimming holes but the ones I know are usually very cold. I've only had a cramp once while running and I was very surprised as well. I don't get cramps.

Snakes, bloodsuckers and running with a helmet :) Made me smile this morning.

Your running in the helmet story is one of my very favorites!!

And you swim with snakes?? You're my hero :D

You swam with a snake? Yikes!! I'm on the mend, and can start back running in about a week and half. UGH!
Hope school is going well, keep me updated on any retirements :)

I'm so jealous of those temps!

I used to be good at math. Now I'm finding I can't figure out what the heck Jones is supposed to do, sigh.

Blood suckers and snakes? why the heck does anyone swim there?

I would COMPLETELY freak out about a blood sucker. uuguggughgglgllhh.

I giggled at the bloodsucker story. That would be me!!!

Teachers have so much responsibility to get stuff right. I seriously wouldn't cope with the pressure. Good on you for having to constantly learn. You should never get dementia!!

I wouldn't swim there if you paid me.
I am sorry...but the helmet story is still funny...

Yikes, snakes! I haven't seen too many in my lifetime but the ones I have scared the crap out of me!

On calf cramps...I get them a lot in spin class (rarely out on the roads) but I've found the only way I get them to go away is to stand foot flat on the ground and kinda lean into a stretch. Hope you find something that did the trick and that it doesn't come back again--they aren't any fun.

Wow. 44 degrees? That sounds pretty nice right about now. We've had some cooler weather but not that cool yet.
When I was in high school, some friends and I went to swim in a creek. I jumped in and immediately realized there was a snake right next to me! I freaked out and got out of the creek but on the wrong side from where I had entered! It took me a while to convince myself to get back in to cross. I never swam there again.

Please don't write the word "work" while I am enjoying my vacation!
Blood suckers and snakes.... remembering part of our politicians (I don't know if you follow the italian "affairs").

I remember that funny helmet story, but how can you deprive your new readers?!