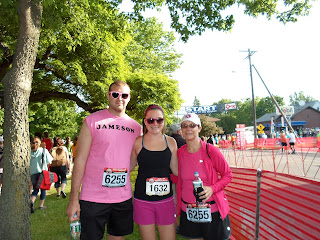 All set and ready to rumble!
I had an unbelievably good time at Vermont City Marathon this year particularly considering a few days before it I was not looking forward to it at all.


And you have a great race for all of our family! 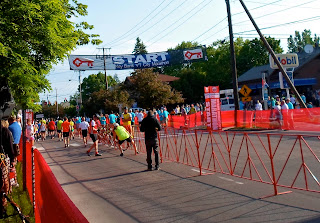 Before it was my turn to race I did some spectating catching my children in two spots before I caught the bus to the relay zone. 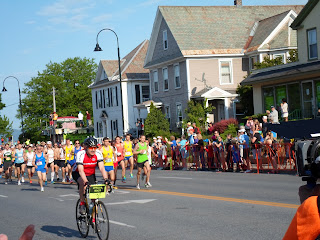 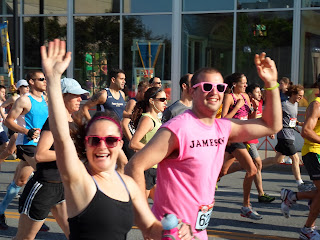 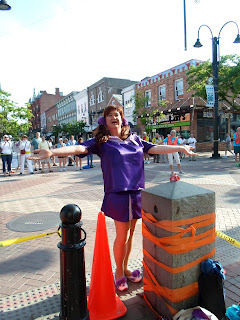 One of the wonderful volunteers.  You get a smile
on your face at this corner. 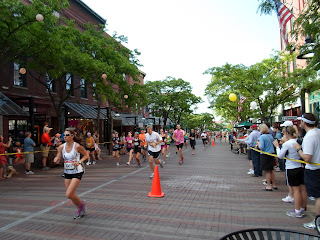 Racers coming up Church Street. I spot my guys coming
Jameson is so easy to pick out! Makes it so much easier. 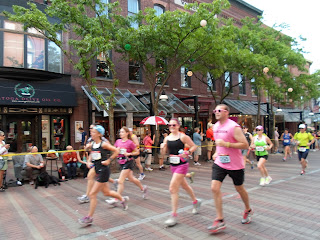 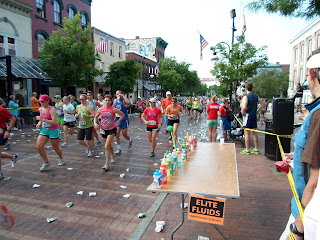 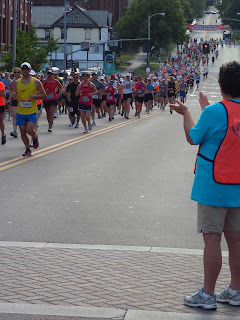 Before they get to Church Street they come down
Main..... 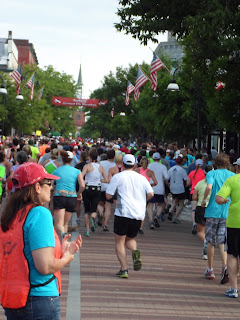 and turn up Church.......and I head for the bus.
I always like this race but today was the best of the best. It was not my best time ever at it and I have had a good time before but nonetheless it was an extra special day. No, it was not as good as my first marathon here but it came close.  I don't think I have run a whole race with my daughter before and that was extremely special. It was great to have the relay hand off from my son who had an excellent PR.  Emily never made me feel I was doing anything other than the perfect pace but just being with her pushed me more than I would have pushed myself alone.  We talked some but not too much.  (I'm not a chatterer as I race.)  I started out with one fast mile but then had my slowest miles and often when I looked at my watch I would see 10 something.  Okay I thought, this is going to be the slow half you have thought it would be so be prepared to get a PW. It just isn't going to be a fast half. I really didn't check my splits for many of the first miles. Because of the relay my miles didn't come when I hit the mile markers and I wasn't that concerned. Once I did start checking many of them were in the mid 9s.  The neighborhood that I always hated in the marathon flew by.  There were miles that I was sure were mismarked because the next mile came up so quickly. We were on track to come in under four hours (because of Jameson's stellar first half) but I knew I often blew the last three miles in a half and was not convinced the dying wasn't coming and I would blow it.  Yet, as I checked splits they seemed to be getting better and I felt great. I was passing many people on the bike path - the last 4 miles.  (It was strange as right from the start I was amongst runners that run a marathon under 4 hours and that is not my speed at all so we were passed a lot.  The relay makes it strange how you are not running near racers of your speed.) I began to have no doubt that we would make it in under 4 hours.  Before I knew it we were at Waterfront Park where there are thousands of spectators. I loved running through the crowd with Emily.  I saw my friend, Heather, who has gone with me to other races.  I saw my husband cheering us on.  And then we were at the end in 3:55:50.  Woot Woot Woot!
I ended up doing my half in 2:07:24 which really killed my negative expectations I wrote about in my last post.  I am especially pleased that no mile went over 10 - I rarely do this in a half.  And my last 3 miles rocked!  Rocked!  My overall pace was 9:40.  It was my second fastest out of 4 this year.  The Unplugged was faster which is also on the bike path and is the half I "train" for.  This half was my 13th fastest out of 22 overall so pretty much in the middle which is great when I thought I was going to have  a PW!
Mile 1: 9:17
Mile 2: 9:57
Mile 3 9:57
Mile 4: 9:36
Mile 5 9:39
Mile 6: 9:35
Mile 7: 9:56
Mile 8: 9:47
Mile 9: 9:32
Mile 10: 9:52
Mile 11: 9:47
Mile 12: 9:24
Mile 13; 9:31
.19 8:32
Woot Woot Woot!  I had so so much fun!  I loved running with my kids!  We had a great meal after and took our time and just enjoyed sitting! 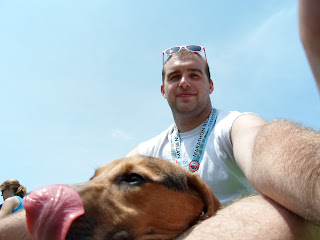 After the half - I should have gotten a better shot as this
was very cute but I couldn't motivate myself to get up
and take it. 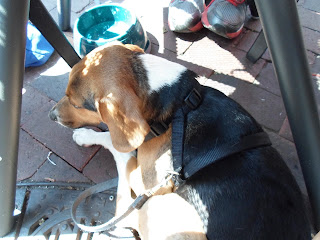 We go out for lunch and Jax settles in under the table. 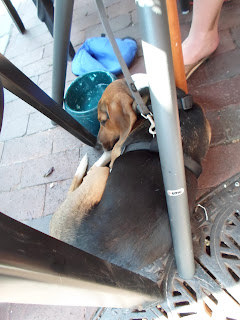 The crowd for this marathon is so great!  All the people in the neighborhoods are out with hoses to cool you off, water, snacks, freezer pops (Emily thought this was the best thing ever) and watermelon.  Families set up their own aid stations and are so kind.  This is such a great race. And  I am not just saying this because I am local. I saw very few people I knew - two on Battery Hill and two at the finish so my enjoyment of the crowd was not because I knew them.  It was just fantastic - so much fun!  I wish I always felt this high after a race.

Okay a few more stats.  Here is how Jameson and I did as a relay team.
We were at 34% of the racers - all types

You guys did an AWESOME job!! What a wonderful, wonderful experience. Your joy and exhilaration just shine through this post.

This post made us smile! What an awesome and joyful day! Add to the happy mix of everything - matching outfits - and even Mr. AJH and Jax were included - doesn't get any better.... and then you came back with a brick - well done all the way around! :-)

What a race...sounds like the perfect day! Love all your pictures...made me want to be there.

Oh how absolutely FUN! I wanted to read this when I wasn't rush over the weekend when I was in the mountains, so glad I did. It was a blast to hear the big smile on your face for every single one of those miles and the huge grin you had afterwards. How special the day was. It'll be a long time before my son will be able to run in a relay with me, but one day he will (when he's done with high school and college track) and I so look forward to that.

Wow - that's great! So glad you had a good race & time with your kids.

I smiled all the way through that post. It just sounded so happy. I'm so pleased for you.

Fantastic race Andrea. It must have been so much fun to do this together as a family. And then Jaxx at the finish line. What more can a person wish for.

What a great race report. Your happiness radiates from your words.
Nice that Jax got to come along to spectate! I'm very impressed with his table manners.

Awesome!! I was a little sad to miss it, but I had a perfect weekend camping with the family, so it was worth it!

Great day for all of you! Doing these things with your family is very special. As you say, you rocked!

Good job... You are so lucky to be part of a running family.

What an awesome race report -- I think it is so fantastic how you get to run with your adult children like that -- so cool. Congrats.

What a fun time together! It's so much fun when you surprise yourself!

Beautiful day for all the family!
Nice report!

wow, you all did awesome! What a fun race! Good idea with the pink shirt for Jameson

What a happy race report! You guys rocked that marathon. I am noticing though that one family member did not participate in the relay. Was Jax injured or something? :)

I always love reading a Team Halnon race report. You guys are the cutest running family around.

Glad you knocked down your negative expectations.

You guys did great!

Both your daughter and son are machines...but then, look where they get it from!

Way to go Team Halnon! I love that running and athletics are truly a family affair. I'm jealous and wish my family was more involved. You all made a great team. Congrats on a strong race and killer splits for the last few miles! WOOT!

A most awesome race report! I need to find a family to adopt!

Congrats! I love that this race is a family event for you.