Ride Your Bike to Work Day 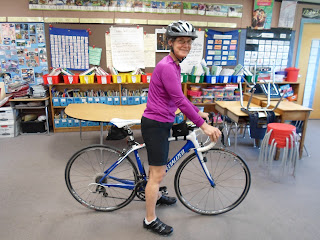 My son texted me about Ride Your Bike to Work Day Thursday night when I was on my way home from my race.  I quickly decided I needed to do it and somehow I got up early enough to do it.  I wish I rode more often but so many things get in the way.  Some years I've tried to organize and get others to ride on this day with limited success but this year it was just me.
Saturday I ran a 12 miler. I guess it was one of those character building runs because it was awful.  It was hot, I was tired quickly, it was long, I was hot, I was tired.  But I did it.  Truthfully looking back I wonder if I should have quit. I worked hard to do it all but now I have this very negative memory of my last long run before next weekend's half. I will focus on running with my kids in a great race and not worry about the distance.  I am worried about the heat but it will be what it is. 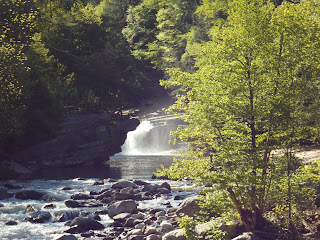 Taken early in my long run.  I don't run by
these falls that often, I'm more apt
to be on my bike. 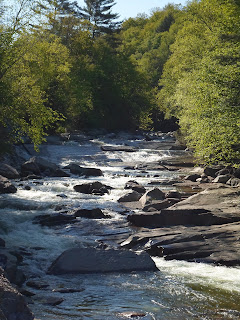 I had a little recovery time before we went to a wedding. It was a beautiful wedding. The reception was at Sugarbush Resort, a ski area not too far from here. I failed at taking many pictures but I have a great one of the groom and his mother (my good friend) and the gorgeous couple.  They will have beautiful children.  It was  a relaxed reception with lots of laughter, dancing and good times! 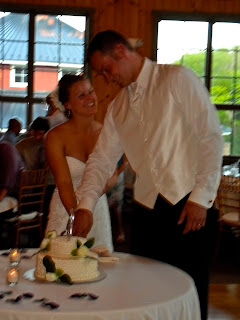 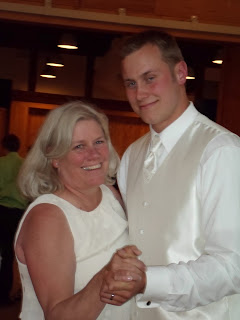 Sunday I took an early morning 4 mile run which restored my confidence some.  I was tempted to add miles but decided no I was going to stick to 4. I was planning a bike ride later and wanted some time before that.  When I did go on the bike ride I was in Burlington and went on the bike path. Not a brilliant idea on a gorgeous Sunday. EVERYONE was on the bike path, many people with no clue about bike path etiquette. ( I was a little nervous with my very new clip in skills but I did not have any problems.)  I managed and added on some miles off it too. Overall it was  good ride and I stopped to see Jameson and Jax at both ends since I parked at his house.  A great place to park for a bike ride! 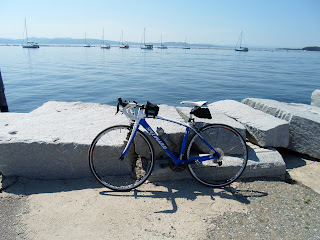 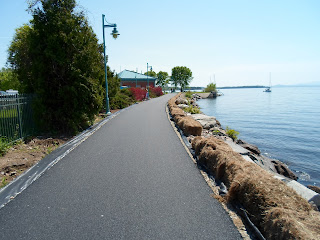 The path has been repaired since last year's flood.  This
year the marathon won't have to be rerouted. 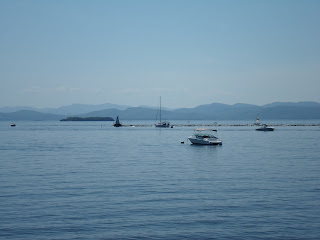 One of many many beautiful views on the bike path. 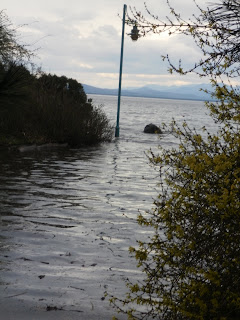 This is from last year approaching where the sidewalk above
was replaced.  You couldn't see it because it
was around the corner, completely flooded.
Posted by ajh at 6:13 AM

well done suffering thru a tough run--sometimes it is those runs that build strength and character!

What a great weekend! And well done on pushing through on that tough run on Saturday.

It was bike to work here on May 10th but it was pouring rain that day so not many people commuted by bike.
I for one never go to work on my bike, it's a little bit to far and since I workout early in the morning I don't feel like biking an hour later.

I think you're right--that Sat. run was a character builder. The first hot ones always are. Loved your pictures from your ride. Beautiful!

Looking good, Andrea! Really good!
I don't like running in the heat at all and 12mi is long enough to make one totally miserable if conditions are not good.
Have a great week!

Great pics - love those falls! You've gotten some great biking in too, love it when biking can be for transportation too...that's pretty much the only time I get on my bike nowadays.

You went to visit Jax and didn't post any pictures?

Nicely done. I would run by the falls every day!

Your run may have felt awful, but the views look incredible! Beautiful scenery.

I had an 8-miler like that today (without the views). I suppose we just have to accept that some runs are haaarrrd...

Your weekends are always jam-packed aren't they? Two runs and a bike ride and a wedding! The bride's dress was lovely.

Beautiful pictures! Look at your tough 12 miler as a mental toughness run. Those are as important as effortless runs. You're all set for next weekend.

Gorgeous! I've finally adjusted to my clip less pedals without breaking into a pre-ride cold sweat. It certainly is an adjustment - but so worth it!

A busy and fun weekend! I think if you hadn't finished that tough run you'd feel more unprepared for the half. I'll bet you knock it out of the park now that you got the bad run out of your system.

What beautiful scenery for your long run!

I loathe those first HOT long runs. They are so tough, but you made it through! We had a wedding this weekend too, but it was my step-daughters! Weddings are always fun.

Not only sounded like a great weekend...but looked like one too!! just beautiful picturesque views along that bike path! LONG, HOT runs are killers when in the moment...but how strong was your character afterwards?? Great job! ;)

also gorgeous photos from your run. so scenic!!