Tomorrow is the Sweetest Half - in Middlebury,Vermont.  I think this race started out in March and was supposed to coincide with maple sugaring but now it's in May.  It is a very pretty half (although we can't run through the covered bridge this year because it is under construction) but it is very hilly. Two years ago I was the most tired I have ever been after a half due to a very windy day.  Last year wasn't as windy but I was disappointed with my time.  This year I have low expectations and not as much excitement as usual so one of my main goals is to enjoy the race.  I am thinking I perhaps signed up for too many halves (I've done two and have already signed up for 3 more -two this month and one in August) combined with all this triathlon stuff going on.  Live and learn. I had another one I was looking at in July but that is definitely off the books for now. I will try to keep most of my miles in the 9s and not have it be my slowest time ever!

I am going to have to take some time off at least swimming and running for a week and a half or so. I am not sure about biking. I have to have some oral surgery done next week (very sad face).  I won't lose my fitness right?  There is nothing I can do about it so once I can swim and run again I will be back at it.  The oral surgeon is most concerned about my not swimming.  But I can't lose speed  I don't have!

I opened one of my packages - so many of you can't understand AT ALL why I would not open a package immediately.  The one I opened contains a tri top I found on sale that I like. It is tight but my belief is they are meant to be tight, right?  The wet suit still remains in the package. It will get opened soon I promise. 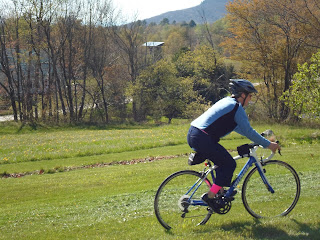 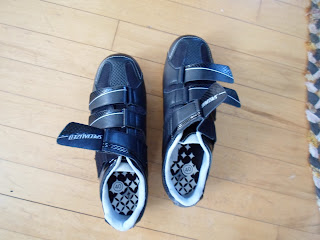 Today I bought clipless bike shoes and of course pedals.  This was one of my goals for the year and I have done it.  So far I have just ridden in my yard - high excitement - but I was able to clip in and out around 8 times with no falls.  My husband was very impressed as he watched our daughter do this when she was learning and she fell more than once.  Just saying! 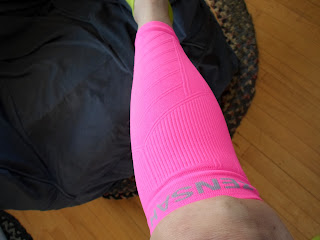 My calves are ridiculously tight (biking?) and I bought hot pink compression sleeves today to help them out.  I have been using the stick and stretching the heck out of them but they remain fairly tight. That is part of the reason for my lack of excitement for tomorrow. But it's going to be a sunny but cool day, it is a race with good energy and it is very close!

Speaking of close I had to go to a shower today and I rode my bike. It is rare I can "get anything done" under my own power so this was a treat. Although I  do get myself to work now and then so that is not as true as it once was.

One more thing......next weekend we have a birthday party for a four year old girl.  Suggestions for a present from those of you with kids?
Posted by ajh at 8:00 PM

Have fun tomorrow and enjoy the day despite not being overly excited. You are a racing machine! No, you won't lose fitness from taking a week or two off - it probably will be beneficial, overall, to take a bit of a break both mentally and physically. It might help get you amped up for your other halves coming up. I am *liking* your bright pink calf sleeves - mine are Zensahs, too, but soft pink. Bright pink is much better! :-) Great job on not falling over trying out your clipless pedals. I don't think you have a competitive bone in your body since you don't remember exactly how many times Emily fell over. :-)

I hope your run tomorrow is really enjoyable. I hope the pink calf sleeves help with the tightness and you get to run easy.

Good luck tomorrow at your half....seems most of blog land had a half marathon this weekend :). Just enjoy it and don't stress about a time...that's what I'm going to do, just not feeling that great for this one.

So fun on all your new toys: biking shoes and bright pink calf sleeves and tri top. :)

Have a great half!!! I just made the transition to clip less - a little painful at first but now I'm absolutely in love with them! Hope you recovery quickly from the oral surgery.

I'm excited and a little nervous about tomorrow. What other half are you doing besides VCM?

Have fun at your half! Take it easy and read as many signs as you can.

I had a knot in one of my calves last year that stretching and the stick didn't take care of. I signed up for my first ever massage and it was amazing and painful. You might want to consider a lower body deep tissue massage.

I was seriously tempted to do that half but it was just a teensy bit too far for me... (lame!)
I love your pink compression sleves- I have the exact pair in heinous neon green and I LOVE them!
GOOD luck running today and have a blast- it's so beautiful out here and I hope it is there too! :-)

I hope your half goes well today! I totally hear you on tired legs from overdoing it a bit. We just don't recover like 20-somethings. : (

Good luck with the oral surgery. You'll be fine with the time off.

Good luck on the half today and good luck also on the oral surgery.
It is wise to run the hilly half with the only goal to enjoy the race.
About your question: to cover the distance of 2500 meters (included warm-up and final stretching) I stay in the swimming pool 55/60 minutes.

Great job on the clipless!! I've found that really utilizing my foam roller and hitting those tight spots for 30 seconds each (and it seems like the entire calf is a tight spot!) has helped me tremendously lately.

Boo to the oral surgery. :(

But YEA to the clipless pedals! I knew you'd be ready for it this summer! It's not nearly as bad as we make it out to be ahead of time. :)