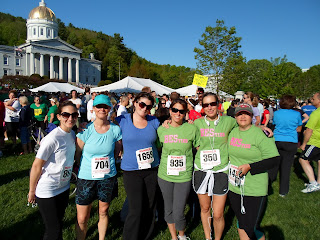 Two of the teams on the Statehouse lawn
I have known for quite awhile that I run to race.  There is just something about racing that I love! I almost always enjoy races but last night was the best of the best. It was a Corporate Cup where you raced in teams of 3 with people you work with.  I have no idea how we placed (what? competive AJH) nor do I care.  I do care how I did but that is it. I have finally convinced people at work of this and the last two years I have gotten people to do this race.  This year there were 3 teams: 2 teams of runners and 1 walking team.  There were 3 racers who had never raced before and they all loved it! One of them is already looking for another race and telling others about it!  I don't think they're going to become the racing insane person I am but I know they'll do more. One girl's boyfriend races incessantly and he was thrilled she loved it.  I can't describe how much fun it was to see how pleased these women were with themselves when they completed the 5K.  Many times last night I was very aware of just how much fun I was having and how glad I am that I began running and racing.  This was  a big race (around here - 3000+ people between both races) and quite a first race. 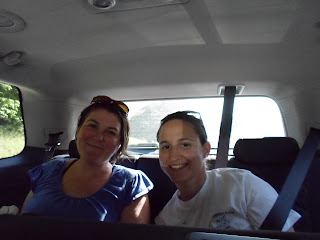 My team on the way 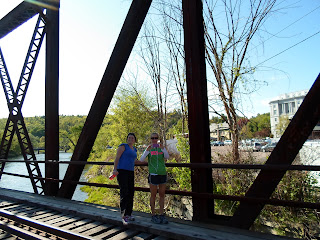 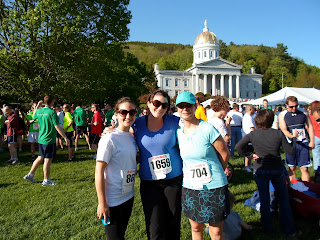 The non matching team before the start 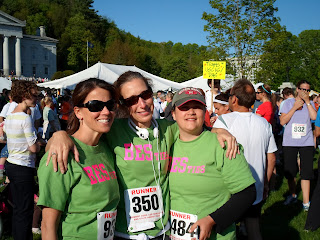 The matching team
To begin with we all had to find parking which was not easy.  The race takes place in our state capital, Montpelier and there are generally not 3000 extra people there.  Then the whole meeting on the Statehouse Lawn thing, yeah right.  But somehow we did all manage to find each other before the race began. Once we saw people lining up I convinced 3 others to head toward the front with me. This is a crazy crowded start and last year I was weaving around people forever.  I had a very slow time last year and the only thing I could really think of that caused it was the start.  No starting timing chips for this race but they could truly use them.


My goal was to have fun and to beat last year's time although I couldn't remember what it was until I looked it up race morning.  It was 29:11. When I got to the first mile he called out 9:00 so that was a decent start especially with the crowd. I hadn't had to do nearly as much weaving this year and even though it was crowded I was in a flow with the crowd instead of being held back.  At the second mile I was less than 18 so the second mile had been faster. (When I checked my Garmin splits they were rather different than these.)  I had not seen my runner friends as there is a loop kind of in the middle and you don't meet everyone.  I did meet the three walkers as I was heading into the third mile and they were walking together all smiles.  A good friend that I only know from racing ran by me about a half mile from the end.  I was not looking at my watch but knew that my pace had slowed as I was tired.  The biggest hill is not far from the end and I was trying to save something for going up it.  Once at the top you go flat for one street, and then it is downhill, and a turn to the finish. I heard the announcer and heard that it was 27......  I poured it on - really and thought I had touched the mat in 27 but nope - I found out later it was 28:01. So my official pace was 9:01.  Just like my halves near the 10 mark. My Garmin gave me 8:47 for the pace as it was longer. I am sure with the crowd I did not run the best tangents.  I would rather be on the outside than in the middle of a crazy crowd at the start. My mile splits by Garmin were 8:35, 8:44, 9:16 and hold your breath--- 7:24.  I can only guess they just stood somewhat near the mile mark for for these to be so different.  Whatever. I was thrilled.  You don't get age group or gender spots for this but overall I was 762 out of 1695 runners. I am always happy to be in the top half.  The women I ran with thought I was speedy fast which is always nice to hear!  I saw most of them come in although I missed one person on my team.  Everyone was so thrilled with their race, it was a real pleasure to be part of it. 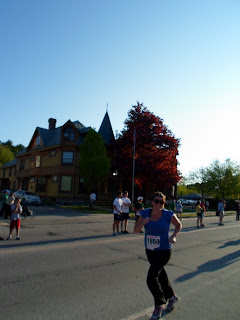 My good friend just before the finish!  She
picked it right up when she heard me yelling. 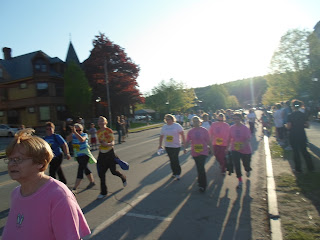 Our walking team coming in 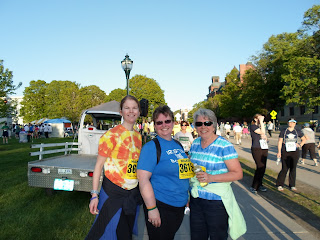 The walking team - I didn't get their picture before the race


On the way home we stopped at the same bakery/deli we stopped at last year.  I had the same thing - grilled cheese and you can't imagine how good it was. I am still eating soft foods so it was perfect.  (I ate it with a fork and knife- strange but it worked.) I may have had a maple cupcake too plus I brought one home to my husband.  We all had  a beer - very relaxing.  There is never time to talk at work so the whole evening was pure pleasure! 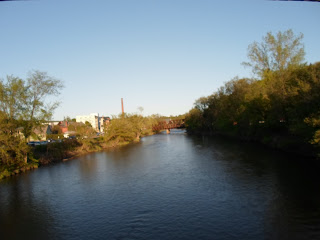 This is always a pretty place to race 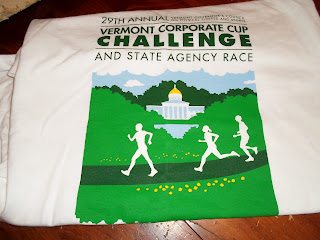 This sounds like such a fun time. I love those races where you recognize during just how fun it is. :) And you're totally inspiring other people, which is AWESOME! What a great feeling all around!

How absolutely fun! You did so well and it makes me smile that you had such a great pace and felt speedy. Definitely deserved that maple cupcake and grilled cheese! :)

Mmmm maple cupcake. My son was just asking me to get some and I think I might just have to but maybe I won't let him have any. After all, cupcakes are way more important than whatever he was thinking of using it for.

That sounds so fun! It is always extra special to run a race with new runners and see their enthusiasm!

Looks like you had a lot of fun Andrea. And the weather looks great too.

What a great event, and so cool that your colleagues enjoyed it and want to race again. We just don't have races like that in the UK - you Americans have some great ideas!

Racing with coworkers/friends is always do fun. Another beautiful course. I really need to get to vermont someday.

Sounds like you had a great time! It's so much more fun to race with friends than to race alone.

Yes, racing is the best. Albany has a Corporate Challenge the same day. My school didn't run it...just as well for me.

Running with friends is fun. Congrats on the great finish time!

It's easy to see that you had a great time! Beginners are always enthusiastic when they are running their first race.

What a fun day with friends! I don't believe I've ever had a maple cupcake...

while i obviously love running and racing too, i think my favorite part about it is introducing others to the sport and watching them love it and grow in it! way to inspire your co-workers and congrats on beating your 2011 time!