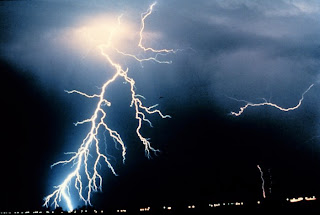 The weather forecast was lots of rain and thunderstorms.  I had packed my bike and my running clothes as I had an appointment in Burlington mid afternoon and planned to do both afterwards.

When I went to work it was raining.
During the work day it was pouring.
When I went to my appointment it was sprinkling.
It is now raining cats and dogs. 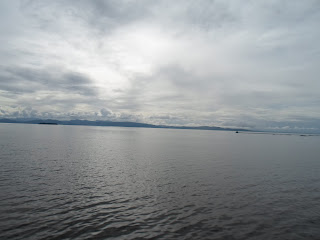 All of these pictures were taken on my run.  A vast improvement
over what it had been. 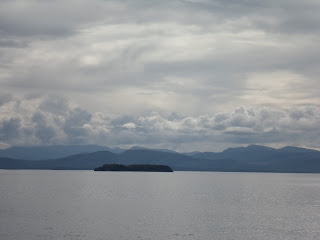 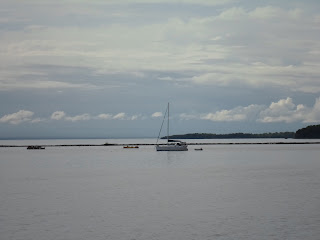 I headed for the bike path figuring I would give it a try. During my bike ride it sprinkled with some sun thrown in.  During my run it was sunny.  It was  a GREAT day on the bike path. It wasn't crowded.  You could go fast on the bike path at least until those annoying road crossings which came rather frequently.  But I had fun, lots of fun! The only  problem was I had to pee badly on the bike. I had my place all picked out but when I got there it was closed.  Oops.  I finished the bike ride and got ready to run, not a quick transition at all.  I need to work on that but I was working out of my car, I had to lock up my bike and nothing was ready. Then I headed out for the run, at first going very slowly as I had not gotten to the bathroom yet but this time at least it was open.  Whew.  Then I could settle down to business. Well kind of.  Even though I didn't ride that far on anything remotely hard (15 miles) my legs were heavy.  And they stayed that way.  Let's hope I can do a better job picking it up on the day of the triathlon. I feed off other runners in races and there may not be any other runners left by the time I am running!  It's all good though. First tri - automatic PR and it will be all about finishing particularly that dumb swim.  Back to today. I had a great run in spite of heavy legs. I loved being on the bike path. It was beautiful out (a bit muggy) by that time and I loved fitting both these things in easily "after work."  I drove home with  a big smile on my face. 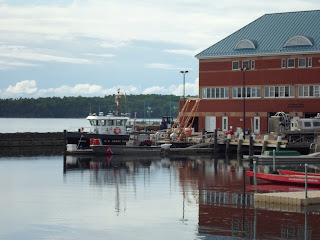 These pictures are for the Black Knight - Coast Guard boat
and Station. 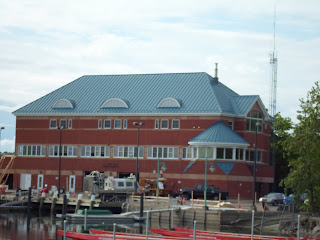 First I made a quick stop to see my son and his dog, get a cup of coffee and a seltzer from him and change my clothes - a real bonus! 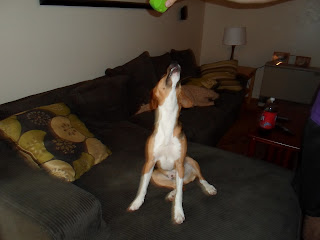 This picture is for Kandi who wondered why I didn't
post any after my last visit to Jax.

I am hoping to ride my bike to work tomorrow.  The forecast is iffy as the whole week seems to be.

I have had 3 appointments in the last two days.  The first one was with my doctor. I found out part of why Saturday's long run was particularly unpleasant. I have a bad yeast infection. She seemed incredulous that I had run not one but both weekend days. She knows me though as she didn't even try to tell me to stop running but did let me know the best thing I could do was to run in the nude!  (Keep those areas cool and dry. Sorry if TMI.) Somehow she knew I wouldn't be following that suggestion but I did tell her about Ewa's report of Bay to Breakers.

Next appointment was with my oral surgeon who informed me I still couldn't swim  and continued to need to eat soft foods.  Really?  Wow.  I wasn't expecting that.  It will be at least 3 weeks in between swimming.  I am getting worried about that.

Last appointment was with the dermatologist and all my moles look fine.  Big whew.  I didn't have time to read a word from my book at either of these appointments today which is partly why I had so much time on the bike path!  Love it!  Doctors right on time are the best. My own doctor was rather late I will say but I love her so much I forgive her.

Here's hoping to more good runs, rides and swims to all of us.
Posted by ajh at 9:32 PM

Running in the nude? What kind of doctor do you go to?? At least it's not Winter over there.

What do you have against running nude? ;-) OK, wear a bra.
Just the other day I was reading a post of a biker who has mastered peeing while riding. Hmm...
All I have to say is: What is the world coming to? :)))

To answer a couple things from my blog, I didn't really do much for nutrition for my sprint tri. I just tried to eat a good breakfast and take in plenty of water and gatorade during the bike and run that was it.

The swim on the olympic is actually a 1.5K which is like .93 mile. I figure it's so close to a mile I just round it up because it's easier for people to envision a 1 mile swim than a 1.5K. But that is the standard/official Olympic or International Distance swim, which is much longer than most Sprint tries and only slightly shorter than the Half Ironman which is weird. The Half Iron is 1.2 miles.

Wow I'm sure triathlon attendance rates would pick up if everyone was nude! Sounds like you had a great ride and run - I often set upy passenger seat with hat, runnersetc to make a bit of a transition even though I have to lock up my car etc to keep me focused on transitioning. Don't worry about your swim, you'll get there!

Sorry about the YI & dental problems. Hope all heals quickly! Looking at the photos early in the post, they could have easily been taken of our Puget Sound, viewing the San Juan Islands. Beautiful!

Hmmm running nude? Don't forget to post a pic then :)

Yes! Nude running, the cure to all feminine issues :-)
Your posts are always so awesome!
Bummer about the soft foor situation- you must be dying for something super crunchy right about now...

Nude running during the summer months can work for sure. You are really enjoying your workouts and that is great. I'm positive your swimming will be fine as well. To answer your question on my blog: tick bite fever is very common around here and I've had it twice. Dogs get it a lot and must be treated asap or they won't make it.

I bet you can't wait to eat something crunchy!!
Thanks for the Jax photo. He's singing!
Glad the weather cleared up for your ride and run.

Well, the temperatures are rising these days...perfect time to try out nude running!

Sorry you can't swim still. I think you will be fine, though, b/c you have otherwise been consistent.

Seems like all these Blogger comments are picking up on your nude running reference. I don't need to say anything about that. (I won't make any comments on yeast infections either, although I think I just did)

Sounds like a crazy week between doctor visits, multi-sport training, and variable weather conditions. You're on the right path.

Nice ride and run! Loved the pictures too.

As for running in the nude, I'm self conscious enough running in spandex at races so I think I'll pass. Besides, I don't get yeast infections :-).

Running nude sounds like the wrong suggestion. Maybe run in a skirt...not the kind with built in panties. Commando, skirt style! Hehehehehe

Um, what? Nude? No one would want to be at MY races, that's for sure!!

I've heard you should take off your bike shorts ASAP after a ride to help prevent bacterial growth and such. Wonder if it's the same for compression-style running shorts?

Lisa's suggestion is pretty funny, though. :)