It's Lousy Weather and I'm Glad

It's drizzly, cool and very windy.  I could hear the rain and the wind all night and I wasn't looking forward to my run today. But my run is done and the weather hasn't improved yet I don't care.  Why?  I feel like it gives me an excuse to laze around the house, reading, blogging, cooking, watch a movie, doing odd errands yet nothing too taxing.  Which is just what I wanted to do today!  I'm reading a good book that is hard to put down, perfect for a lazy Sunday.  Except for my runs it has been a fairly sedentary weekend!

Yesterday my friend T and I ran 11 miles. It was a great run. We both felt good and the pace was a decent pace the whole way.  The temperature was about 38 degrees and we both remarked several times that it felt pretty much perfect.  The 11 mile run we do has some major hills and this time it had some unexpected dogs. As I took on the dogs with my yelling voice telling them to go home T laughed at my ease with the dogs yet my fear of snakes.  (She is the one afraid of dogs and I was trying to head them home for her sake.  I am careful about dogs but these guys were just making noise.) But there are no harmless snakes which is one of the many reasons I like winter in Vermont!  I have to say I was tired the rest of the day which I wasn't sure if it was from late nights this past week or the run itself. 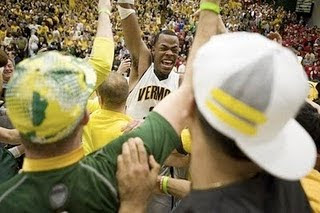 During the afternoon my husband and I watched UVM beat Boston University to get into the Big Dance.  Yahoo!  My son was there watching it and I joked throughout the game that I could see and hear him.  My husband gave me that look and mentioned the number of people in attendance and that this would not happen! Yet when  he did appear on National TV both my husband and I missed him!  We had various people call and text us to say they saw him rush the court after the win. Did we see this?  No!  But I have stolen a picture from my daughter's blog that he is in (in the yellow and green hat.)

So rain pounded on the roof all night.  Then the electricity went off shortly before it was time to get up.  Now I had thoughts not only of running in the rain, getting drenched, being cold but then coming home not able to take a shower or have hot coffee!  When you live in the country and your water comes from a well, no electricity means no water!!!! I knew T would be coming soon and we would run but I must say I was dreading it.  As she was driving up the driveway the electricity came on!  One problem solved.  I also must admit that it was not raining very hard, it was not very cold BUT it was incredibly windy!  The sound of the wind roaring off the mountain, going along the river bed sounded like a freight train.
Today was my day to run a St. Paddy's Day Virtual 10K from Living in Luling.  We took our usual 6 mile route and simply added .2.  I am not good at being speedy in a non race situation.  Overall I will say it went fine.  The first 3 miles were a bit tricky as the wind was definitely doing it's best to defeat us and send us home.  As we ran through the center of town we had the lovely sound of many many generators as people coped with the no electricity thing. So everyone's was not back on yet!  Once we turned around and headed back there were times when we were on a downhill slope with the wind at our backs. Life was good!  I tried to maintain a good pace but did pretty much lose it the last quarter mile on the hills leading back to my house. Before that the pace was in the 9s all the time. I would not have been happy with my time for a real 10K but I will take it today. Just the fact that we got out there in the miserable weather was worth quite a bit. 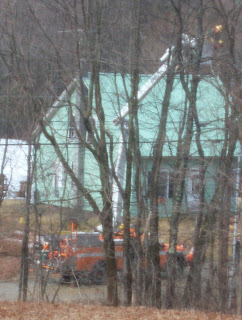 The orange electric company truck with the man with the chainsaw wayyy up in the trees is a welcome sight!
After I got home, stretched, took a shower and drank my coffee the electricity went out again.  I looked out the  window as I heard chain saws and there were some major branches down across the road.  Thank you Electric Company for responding so quickly!

I will leave you with a picture that doesn't do justice to the beautiful rainbow that we saw this morning. 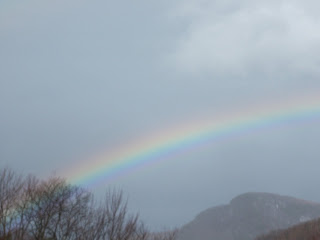 Great job on your runs! Weather in NE has really sucked the weekend. It finally stopped raining her around 11am. Hills are never fun. Thats awesome that your son got on tv!

Wow! What a rollercoaster day for your. The weather, electricity, the running! I commend you for fighting the good fight and battling all the above. Here's hoping the rest of your day is full of laziness, relaxation and plenty of electricity!!

That is a beautiful picture of a rainbow!! It has been some time since I have seen one. I am like you...I like running in forty degree weather. It is perfect because I never get over heated and that is a big problem for me in the summer.

Nice job on your runs! I hate snakes too!! Funny about the dog:) Enjoy the rest of your day:)

It's been so rainy here all weekend too! Way to get out there. I was sooo glad to be done my run this morning. Lazing around now guilt-free. :)

Wow! I'm impressed that you got yourself out there despite the rain and tentative electricity...glad you were then able to take the time to laze around the rest of the day.
Beautiful rainbow...

I can totally relate to how you feel. Yesterday was actually gorgeous here, in the 60's, but today was kind of rainy and blah. It was a perfect day for rest and recovery after my 18 miler.

That's so cool that you have a pic of your son as he rushed the court! I'm sorry you didn't get to see him, but congrats on the win!

It's always nice to have a day where it feels okay to stay indoors and relax!

such a great photo to end your post with! I'm getting very excited for March Madness.

Great job on the run!

Cool that your son got on tv, but too funny that you missed it.

I love the rainbow, that was a perfect picture to end the post! I also look forward to cruddy weather as an excuse to stay home and just "be." I do hope you have a few signs of spring soon though! At least your report cards are done, right?

AH! Thanks to that picture of your son, I am totally making the connection of who your kids are. :) Love it. What a great family you have!

love the rainbow pic - glad your power wasn't out for too long!

I'm glad the electricity cooperated enough for you to shower and have coffee. Sounds like a pretty rough weekend. Great job on the 11 miler!

Nice pic - we had a dreary weekend also - no rainbows.

Beautiful rainbow - so pretty! Dreary weekends are great (now and then), what a perfect time to veg, good for you!!! Nice job on the 11 :).

Good job on getting out there in that awful weather! You are hardcore! I am so excited for spring/summer but I bet you have me beat in that department - you guys are long overdue!

Hooray for lazy Sundays!!! I love those guilt-free days now and then. I also LOVE runs with the wind at our backs - especially when it's on the way back!!! I am getting revved up and excited for the arrival of warmer temps and longer days - bring it on! Have a great week!
Kathleen

it rained all weekend here too and I don't think anyone would have loved to run in that.
GREAT on you for getting out there and running.
Love your pics!!