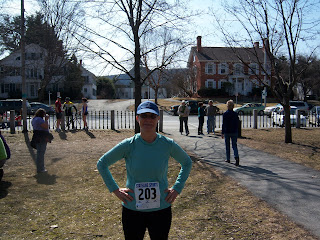 Just before the race, waiting for the race to start
We had a GORGEOUS day here in the Northeast!  I raced in shorts and I would have worn short sleeves but I didn't have a shirt that was green!  Last year there were 300+ at this race and this year almost 600.  It was a charity race for kids at camp so that was great but the organization suffered due to the large turnout.  It started late, ran short on food and water - nothing too terrible but more on this later. 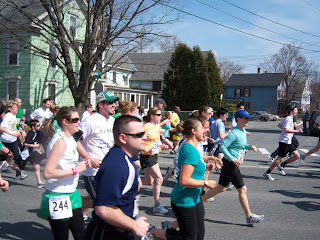 We got there in plenty of time.  We - being my husband and myself.  The race was about 90 minutes away and he chose to spend his Saturday coming with me to cheer me on!  I didn't mind waiting as it was a pleasant town center and sooo soooo soooo nice out!  I ran this race last year but really didn't remember much about the course.

We started out and it wasn't long before there was a slight uphill.  Overall there were a few small hills and one fairly large one.  I was surprised at the amount of traffic in what is a relatively small town. There was great traffic control and cones everywhere so it never felt unsafe. The cars parked on the side of the road were more annoying.  I felt like I was going along at a good pace.  I tend to have a "fast' first mile, slow down a lot in the second mile and speed up somewhat in the third when I run a 5K.  My first mile was 8:51 which worried me a little. I am fine with that pace but I like to stay in the 8s and was worried I would slow down and be in the 9s for my overall pace.  My second mile was 8:55!  Yeah!  I really worked on keeping my speed up in that last mile. There was a hill to head up but it was not as bad as I thought it would be when I was going down it.

I had to laugh (in my imagination, I was really saving all my breath for running) because I came upon an "older" man with no shirt who just didn't look good at all with NO SHIRT ON! :( I had had a discussion on the way to the race with my husband about this and about "some older men who tend to mow their lawns with no shirts on and shouldn't there be a law?  This all started from a discussion about a newspaper article about a woman who gardens in Colorado in a yellow thong and pink gloves.)

Anyways back to the race. I decided to use him to pass so I wouldn't have to look at him. Well, I did pass him but darned if he didn't pass me back, stooped over running style and all and I COULD NOT quite keep up with him! Oh well!  My shirt was weighing me down and keeping me slower I guess!  But my last mile was 8:48!  Woo Hoo! How is that for not only not slowing down but speeding up a bit!  I was thrilled! 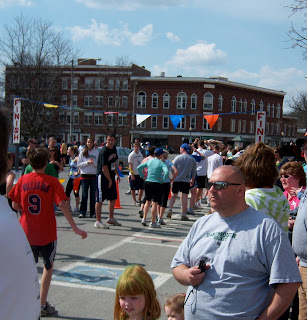 Stopped BEFORE the finish!
At the end of the race was when the organization of the race was an issue again. I couldn't quite get TO THE FINISH because they were stopping you to keep track of the order you were coming in.  Yes I get that but let us finish!  It wasn't too bad for me but as I was leaving there was a huge crowd of people stopped way before the finish!  I would not have been happy at all.  I got my shirt and we left rather than wait to see if any random prizes had my name on them. We did a quick stop at the LL Bean store and then ate lunch at Panera Bread which I love but we don't have any in Vermont.  The ride home was fine, the frost heaves were not bad and the back dirt roads could have been oh so much worse!  Spring in Vermont! 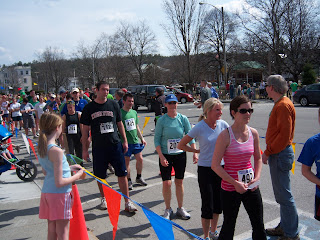 This was my best 5K (only my second) and my best pace of the year out of four races.  I am happy! 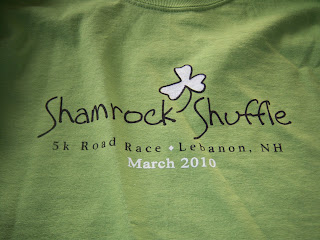 Great race!! I was just watching the video about the topless lady gardening, too funny! I really love your new green shirt, nice color.

I like the race shirt, too! I like that first race photo - the start is always exciting. Lots of smiles there! Way to PR!!!

Oh, I sort of hate to bring it up again, but I hope you didn't have any snake nightmares! ; ) But thanks for the laughs!

Woo hoo!! Congrats on your awesome 5k finish!! Good job on finishing 6th for your age group....that is fantastic:) I did not have the warm weather like you did today:( It was 25 degrees when we arrived in Minneapolis and after having 60 degree weather, it felt flipping cold:) Woo hoo for getting to wear shorts!! I am officially jealous! You rocked it and should be feeling very proud of yourself!

great finish! How frustrating for all the runners at the end though.

Did you watch the basketball game last night? Thought it was so interesting how the Joseph brothers were playing against each other!

Very cute shirt and what a great race for you! WTG!
My spectating posse in Boston last year took the T to approx mile 17, the beginning of the Newton Hills, watched me pass then hopped back on to the finish line which is a total zoo. If you need the exact T stops, say the word and I'll get the info.

Great job!!! So nice that the weather cooperated.

Well done! And I hate stopping before the finish. That happened to me on Valentine's Day. It was so frustrating. Great shirt, though. Glad you had a good race!

Yea! Nice job on the PR! A marvelous way to start out the year. It only gets better from here. :)

Congrats on a great race!! You have the pace my dreams are made of :) It's so nice that the weather cooperated too.

RE: B-day card
When I posted the e-mail address I did not use the @ sign. I replaced it with the word at. You can also go to Meg's blog and she has a write up on the right hand side of her blog. Let me know if you still have issues.

Congrats on the race. When races get bigger sometimes they have troubles adjusting...but they shouldn't have you stop before the finish line. Good job on the PR!!

congrats on the new pr!! that would have been frustrating about the finish - hope they can work that out for next year (move the chute back/make it longer, something).

Nice job! What a great time you had for this race. Hopefully some changes will be made to the race for next year to accomodate the finishing runners.

Congratulations!!! What a beautiful day for a race. Too bad about the organizational issues, though.

Great finish time!!! I really like the shirt, too.

Great job on your race - looks like a beautiful day. It was nice that your hubby was able to cheer you on. Very cute race shirt! Have a great week!
Kathleen

I love the shirt! Congratulations on your awesome time! Love all the pictures!

Great job! I was laughing about the man w/o a shirt. You see someone like that at every race...so funny!

Congrats! What beautiful weather you had! Crazy they had you all stopped!

WOO! GREAT job lady! :) You rock! That race looks like it was so much fun too - perfect weather! And I want that shirt :)

Congratulations on your PR! It was a great weekend for running on both sides of the Atlantic I guess (and weird race organisation as well)... And I agree about the men without shirts thing - most guys should just keep it on!

What a great race! Congrats on your PR! I am jealous of your beautiful weather, we received eight inches of snow on Friday!

Great job on the race! Way to use shirtless man to speed you up! ;o)

That's a great run! Good for you! My recent marathon also didn't cater for the large field. Too bad, but I still had a good time and so did you.

Great job on the race! To bad about the shirtless guy, but very comical.

I like the shirt they gave out. It is much nicer than many I have seen lately.

I know what woman you are talking about! She lives in Boulder and they were discussing it on the radio on my drive into work this morning. Too funny! Too bad about the shirless dude..eek.

Great race, girl!!! Love your recap and all your funny stories. Sounds like a great run, very happy for you!!! :)

Nice job! I worked at a water park for 5 years and have had plenty of experience with shirtless people. There needs to be some kind of bathing suit law out there. Yikes!!!!!

Glad he didn't slow you down too much :)

That is too funny...that is why I love races...gives spice to running! =)

Great job (and cute shirt!) but waiting to finish? That stinks!

Your son has requested that I, being one of his 14 followers, let you know that he really NEEDS a camera. Because Bloggers document things. And he really can't do that without a camera.