Change of Clothes OR Is It Really Spring? 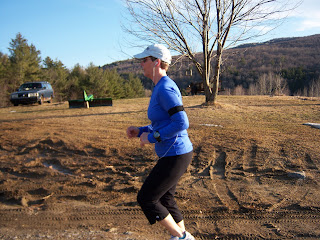 Today I headed home to run outside rather than at the gym.  It was 57 degrees and gorgeous!  I could have worn short sleeves except for a couple of shady areas but I didn't quite dare to go that far!!!!  What a day!  I set out to run 5 miles but continued on past my turn around to run 6.  People were outside raking lawns, playing with their kids, riding horses and bikes.  I had an easy run as yesterday at the gym I ran a tempo run that I worked hard on.  I never choose to do a tempo or speed workout. But if I am following a training plan I am so anal and such a rule follower that if the plan says do a tempo run, believe me I do a tempo run. That is why training plans are good for me. They make me do things I would never do otherwise.  I also had a good workout on Monday and am still so in love with my foam roller.  Why did it take me so long to discover them? 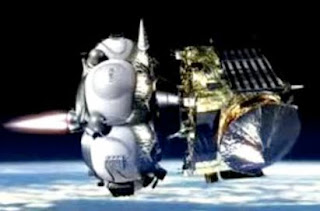 Really I didn't make this up.
This morning in the paper I read about a jogger on a beach who was killed by a plane!!!! I know we have to be careful and all that but there are some things you can't prepare yourself for!!  What are the chances?  How sad for everyone involved!  I was telling someone I worked with about this and he knew of someone in the Canadian wilderness of the Northwest Territories who had a Russian Satellite fall out of the sky near them.  Bizarre! 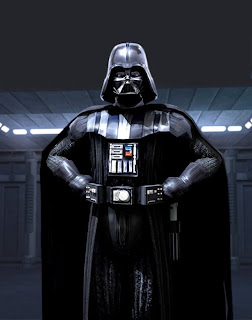 Our principal was Darth Reader(complete with the voice) much to the students' delight.

I seem to be blogging about more teaching things lately but many of you are teachers or parents of school age kids, kids who will go to school or kids who have been to school. There I have it covered. Today we had a Battle of the Books. This is really a national competition but we did our own version. It was set up as a game show.  Students had teams that they had been in for months. There were 10 books and the students all chose some to read. (Many chose to read them all.)  They met as teams and made colorful banners. Another time they decorated buffs. (Not being a Survivor watcher I didn't know what a buff was.)  Today the questionaires and timers came in dressed up as wizards and Darth Reader etc.  Students were questioned and earned points in a series of rounds. There were many many snacks which is a hit all by itself!  The kids were juiced for the whole thing and had a great time. Best of all they did a ton of reading. This Friday is the end of our I Love to Read and Write Week which this was a part of and there will be an assembly.  The winners of the Battle will battle the Mystery Team (teachers). We are dressing up and I am not sure about the whole thing but it involves wigs!!!  I am sure the students will beat us and I am also sure that a good time will be had by all. Kids love it when we "let our hair down" and show them another side.  I once won a jumprope contest  that the teachers were doing and I won more street cred for that than any lesson I ever taught believe me!
Posted by ajh at 9:03 PM

I am so happy that my five year old has inherited my love of reading, you're going to have to post a photo of you dressed up!

I wore a TSHIRT today on my run! loved it!

Its sooooo cold here, Autumn is coming :( I envy your spring ;)

I'm a runner and a teacher so I LOVE your blog because you write about both. It's fun to read about what you're doing and I like your enthusiasm towards teaching and your love of running, keep up the great writing!
I'm happy you were able to shed your clothes(well, your heavy running clothes) and get out there for a nice run in some great weather!

Loving the weather. I went all out in shorts and a t-shirt today. :)

Great job on the run!

Wasn't it just a divine day? I wore long sleeves then wondered why. habit I guess. Love the battle of the books!

It better be spring! I'm bee mad if it go back to being cold again. Darth is looking fine as usual...hehhee

Congrats on getting such a good run in today. Sounds like it was absolutely refreshing!

Ah...so nice to run in this balmy spring weather :)
I love this contest to encourage reading...I have always been an avid reader. What a fun way to get kids interested in something that will enrich their lives! Hope you take a picture of your costume ;)

I am loving this warm weather too!! I wore a long sleeved shirt, capris and a running visor today! I love it:) You are such a good teacher and I love hearing about the things you do with your class! Happy St. Patty's Day!

I couldn't bring myself to run in the shorts that I wanted to yesterday. I just wore one pair of tights instead of two :) Baby steps....temps are supposed to crash to 30's this weekend here!

The weather has been really nice the past couple days here, too! Love the spring!

I'm glad to see your weather improving. It just lifts the spirit for running. I love Darth Reader! In South Africa reading is always a huge thing. In Africa there are millions that can't read or don't have access to books.

When my middle son was in fourth grade the teacher had my friend and I come and give a workshop on "Meatless Monday" (which is actually on Thursday here - "donderdag veggiedag"), showing the kids why it's good to go veggie once a week. Anyway, at the end of the presentation we had the teachers do a jump rope contest - which your post reminded me of! And yes, the kids love to see their teachers step out of their usual "role" like that!
We also had a small article in our newspaper about the runner getting hit by the plane on the beach...it makes me wonder if the runner didn't hear the plane coming, had headphones in or something...very sad.

How cool, o master of the jump rope! I love to hear about kids excited about reading. I was an avid reader in school and hope that I can pass that one to my little guy. Let's see some pictures of the costume!

I love hearing about your students and the fun things your school does to encourage reading. That event sounds like a lot of fun, especially with Darth Vader!!!
I heard about the runner on the radio. The announcer said that the runner was wearing earphones and never knew what hit him. So tragic!

I'm looking forward to changing into Spring gear too!

I read about that runner who got hit by the plane. So sad.

I would kill for the 50 degree temps again - when I get home it's in the high 60's and 70's! I'm melting and it's not even June! Great job on the run!
I love to hear about your teaching adventures! I come from a family of teachers and am so in awe of all of you. Love the book week - makes me want to go back to 3rd grade and do it again! Well...almost :)

We had the same weather. Isn't it great. It's not supposed to last.

I was ateacher so I love hearing about teaching

After a long winter, doesn't 57 degrees feel absolutely toasty? The prefect running temperature for me.
I'm a rule follower to: make a plan and stick to it. I might change some days around but come week end, everything was accomplished. It feels like I've cheated myself if I skip out.

I though we were having spring this week too, but it's snowing today!

I read that same article, it's so sad...