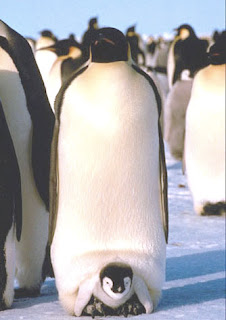 When I got home today my husband asked me how my day was.  I gave one of my three usual replies which range from good to stressful to overwhelming.  I said, "Good." Then I told him that wasn't true it was great!  It isn't often I can say that on a Friday night so what made today so great?  I hope and think it was one of those days students will remember years later with fondness and a smile on their faces as they look back at third grade.  It is an activity I have done for several years now.

We start studying Antarctica in January.  Naturally one aspect we study are the penguins with some emphasis being put on the Emperor penguin.  We talk about how the father penguin is the one who sits on the egg while the mother goes off to the sea to find food.  While the father is sitting on the egg there are many dangers including the cold, other penguins, and the nasty SKUA bird! Last night at home I hard boiled two dozen eggs.  I brought the eggs in and the students are penguin fathers for the day with the responsibility of caring for the egg.  I tell them the day before so they can bring in things to house the egg in and protect it (even though Emperor penguins don't have nests, they house the egg under a flap and on their feet - well we weren't going to walk around all day with eggs on our feet).  Many kids bring in pouches, or boxes.  This year one boy brought in a safe!  The problem is that the adults in the room are the predators or Skua birds!  I warn the students that if they aren't guarding the eggs carefully the skua will swoop in and steal them.  And NO they won't get them back!  (Not everyone takes it well when the skua comes around!) 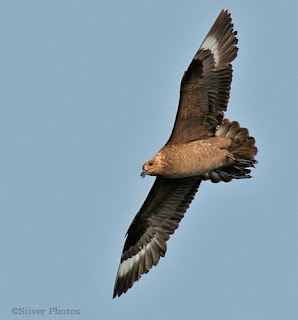 The students all arrive in a state of high excitement.  I give them about 20 minutes before the skua visits.  The first one stolen is the hardest to take but eventually they really get into it.  I make a big deal of it teasing about whose egg I  will get next and how hungry I am. There is lots of giggling and fun.  I snatched one egg out of one boys hand and he thought it was great fun and loved how I surprised him.  Not everyone has quite that reaction.  Near the end of the day I got an egg from a boy who had been taunting me all day about not getting it and the whole class cheered.  I am sure the class next door wondered what we were doing.  We also played goldfish bingo with Antarctica words and anything that involves eating is always a hit.  But all in all I had a great time teasing the kids and hamming it up most of the day!  All days can't be like this one was with a great deal of time spent fooling around but they surely are great now and then.
Posted by ajh at 8:45 PM

Hi! Cute pic of the penguins. I didn't realize what the father's role was for these types of birds. Seems to be a good lesson in this day and age. Sometimes the mom has to work and the dad takes care of the little ones at home.

Have a great weekend!

Oh, how fondly I remember my days with my students. They were the BEST! Beats the heck out of cubicle he** in a district office. Kudos to you for helping the kids experience a day (and a lesson) they won't soon forget! TGIF, fellow teacher friend!! :-) When is your spring break?

That sounds like a fantastic day for the kids and a great lesson for them!

I loved this post so much. It must have been a magical day for the kids; they get so much out of these types of activities and hands-on learning. You are truly encouraging and reinforcing so many principles and messages. I just love it. Thanks for all that you do for kids, no wonder you had a great day.

Now, for running. I hope you have a warm, nice weekend full of fun and some nice runs! Are you on spring break?

I am sure those kids will never forget third grade and their inspiring and fun teacher!

Oh, this sounds like SO much fun! I love activities like this. We sponsored someone's Flat Stanley last year and I took him everywhere. Can't wait for these kind of things with my kiddo! Thanks for making learning fun!

HAHa love it. Good luck in your race today!!

what a fun way to learn! And goldfish bingo?! bonus!

so bummed SU is out!

I know they will remember this for a life time! I can totally remember my third grade teacher and a lot of the fun activites she went the extra mile for. Glad your day was good - hope your weekend is, too! :)

That sounds like a great way to present your material. Teachers are so creative--you are special people!

You get my personal Golden Apple award for being such an awesome teacher!
I still have a cutout, crayon-colored Galapagos penguin Thing 1 made in 2nd grade hanging on my front door!

You are one of the coolest teachers! What a fantastic idea! I bet everyone had a blast taking care of their eggs and playing the game:) Have a good one!

One of my favorite teachers was my third grade teacher, Mr.Dew. I remember him taking our class on a field trip where we had to hike to get to our destination and how kind he was, too. : )

Oh, and to make the cookies, I just added Reese's Pieces candies to a peanut butter recipe. Easy!