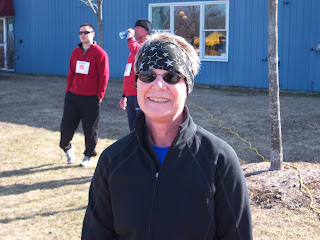 Wow! It was so much colder than last Saturday when I raced today. When it began I was freezing.  I wore my compression tights and felt like I could have had another layer on over those.  I wore a long sleeve shirt, a vest and my very cozy Run Like the Wind top from Cloudveil.    I wore my new Bondi Band - it's virgin run - and thin gloves.  Once we began I was fine except for my hands.  It took a couple miles for them to warm up.
This race was a 5K and a 10K.  There were slightly more than 100  people there.  We all headed down this somewhat narrow path and it was a little congested at first.  We ran down this path for slightly more than a mile and the 5K people turned around and went back. My first mile was 8:35 which I was very pleased with.  We continued on a loop which went for a very short ways along Lake Champlain.  There were a couple of hills but nothing too terrible.  I thought I had  the second mile when I saw a marking in the road and then was very disappointed when we got to it later.  My second mile was 9:19.  Oops!  I needed to pick up the pace again.  When we got back to the path we did the loop again. I have never been in a race where I had to repeat a section like that.  Of course I have done out and backs but that is not what I mean. I wasn't crazy about it but it was pretty and could have been worse. My third mile was 8:43 so I was back in the game.  I was SURE that I was the last 10K racer. I could see no one behind me.  During the fourth mile I passed a guy and a girl who stayed somewhat behind me. I thought they would pass me back eventually as they were chatting away easily and didn't seem to be working too hard. Then I passed  the Vermont RacingwithBabes with sporty high socks. I had thought I wouldn't be able to even catch up to her as she had been in my site for awhile but I passed her and her friend and stayed well ahead of them the rest of the race so I felt relieved that someone would be behind me. My fourth mile was 9:06 and my fifth was 9:09.  I really made an effort to increase my speed for the last full mile and felt like I was doing it.  Before the end the guy and girl of the easy chatting did pass me.  When I approached the end I heard a yell for me and my son had surprised me by showing up to cheer me in.  I had thought he might race it with me so he did redeem himself by being there! 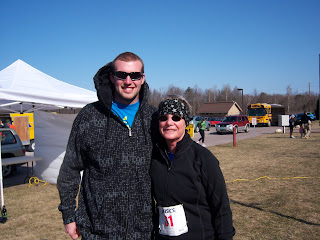 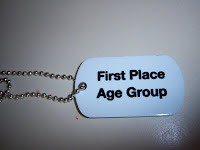 When I got home and saw the race results I was pleased.  I was 1/2 in my age group. I actually thought I might have been the only one!  I was 12/24 for females which really surprised me. Where were all those people?  And I was 26/38 overall.  I'll take that!  The age group prize was pretty lame.

I did make a trip to Dicks where RacingWithBabes says she gets her awesome socks. I decided these socks were just not for me though. I like short barely there socks and I really prefer Reeboks.  I did find some very fun short barely there Reeboks so it was a score!  I also had a fun post race birthday shopping/lunch out with my son!  Yeah! 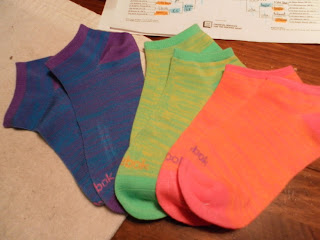 Nice job on your race!! You impress me so much!!

Good job!! Way to place for your age group and run a strong race:) Jameson just towers over you...my son is six feet tall and everytime he comes home he asks me if I am shrinking:) It was nice of him to come and cheer you on!! Congrats on your 10k!!

You are amazing! Those are some speedy times there. Congrats on your time and winning your age group. How cool that your son was there to share that with you.

Well done on the win. Who cares if the prize was lame - a prize is a prize after all.

That's a good run, well done! Congrats on the age group as well!

Great report... and awesome your son cheered you on!

Great race! I often worry about being the last one to come in too - silly, isn't it?

Great race! There is a Vermont version of me? That's funny! Love those socks ... just as cute as mine!

Great job. I love that your son showed up--very cool.

I always love your spunk and desire to go faster and place, you definitely have a sweetly competitive side, don't you? I'm still working through competetiveness...it's a very interesting thing.
That's great that your sun came, was it your birthday or his? Love the new socks, by the way!

Congrats on the race! Your son towers over you! How great he showed up to cheer for you. The socks look bright! I hope you love them.

And - who's birthday? Well, Happy Birthday to someone!!

Awesome timing. And congrats on the 10K race.
It must be nice to have loved ones around to celebrate!
And Happy birthday to you/your son!

I love your Bondi band! And congrats on a fantastic race!

Nice work and I love the socks!!!

Congrats on a great race for you!!! And a cool age group win, woohooo! I love the socks, too...so fun and colorful!

I love the pic of you and Jamo! Congrats on a good run!

Congrats on the race, and what a nice surprise that your son showed up!

To answer your question on my blog, my favorite half marathon race that I just signed up for is the Stratton Faxon Half Marathon. I have an "Upcoming Races" section on the left side of my blog, and if you click on the race, it brings you to the website. Anyhow, congrats on the race and the award. Hey, it still counts that you were first place in your age group. A win is a win, no matter what! I see you were standing in a hole when the picture of you and your son was taken...JK!

To answer your question on my blog ...
The Shamrock Run that I participated this past Saturday was my first. I did not expect it to be a trail run. A friend asked if I wanted to run it that, I said "yes" and that was it. I was expecting some slopes but on paved/asphalt ground.
It worked some muscles that I didn't know I had. And if you do it, make sure it hadn't been raining a few days prior to your run. It's kinda sleek on the ground so you gotto watch it. :)

Sounds like it turned out to be a really nice race after all! Nice that your son showed up for encouragement and a post-race birthday lunch.
Happy Birthday :)

Yeah! Congrats on the good race! Always nice to have fans show up to cheer for you!

Great job! And how awesome that your son surprised you. And hey, you still got first in your age group, who cares how many people were there. Sounds like a small race anyways!

Congrats - great job on your race. I ran a very small race on sat- came in 14th out of 19th - but a win is a win. I wore a bondi band for the first time too. Did you like yours? Love the socks. I'll have to check out Dick's and the Reebock outlet in Lake George.

Whoo hoo for the AG win! Congrats! That sounds like a tough course and you battled through - be proud!
Love the socks, too ;)

Awesome, awesome, awesome all the way around - good race and then to be greeted by your son- fun!
Love the colorful socks - so pretty - they remind me of Easter! Have a great week.
Kathleen

Great job on the race!! First place in your age group rocks no matter how many people are in it! Sounds like a great weekend!

Thanks for the birthday wishes.

congrats on your first place!!!

I didn't know your son has a blog, going to have to go check it out!

You had a terrific run! So good for your son to show up and congrats on the age group win.

Great job on the race and nice finish! You had some really great times out there.