The Route Never Taken Turns Out To Be Wonderful

When Emily was home over Christmas she said to me with some derision in her voice, "You have found  the flattest route in town."

I replied with awe at myself, "Yes, I have."

To say we had different perspectives is stating it simply.  I live in a mountain town and finding hills is easy, finding flats is not.  So wasn't I more successful to find the harder thing?

But she kept encouraging me to give the back roads a try in spite of the hills.  I thought maybe I would but then came the ice storm.  So I waited and attempted it this weekend. I actually thought it might be delayed for another week because of the cold (last night it was -20) but it warmed up considerably and this morning was a balmy 4 above.

I have run on most of these roads before but seldom and in nicer weather. I have always gone in the other direction also. But today I took off on a sunny morning, camera in hand and lots of clothes on.
(Two layers of pants, three layers on top, a hat, a turtle fur (which did not work well- at times my face was seriously cold) and of course mittens. 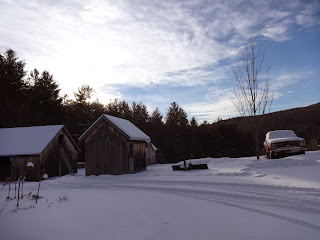 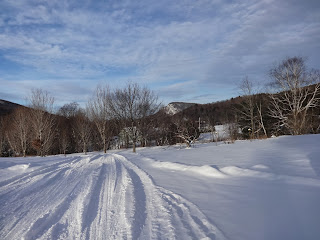 First of course I ran down my driveway. I even took some pictures here even though I have countless other times.  At the bottom of my driveway I turned right instead of left.  The first two miles are on a road I do run on a lot and I do like it. It is dirt and particularly scenic in my opinion.  I did an out and back because I wanted to get 8 miles in and knew I would need to add miles somewhere. It is easier to add some in the beginning if possible. 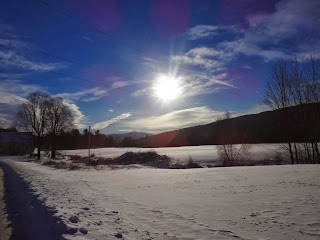 It was cold but oh so pretty! 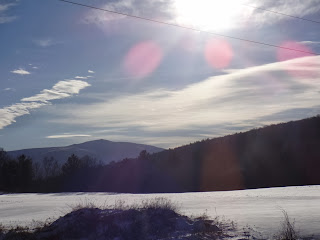 I'm not sure what caused the pink marks. 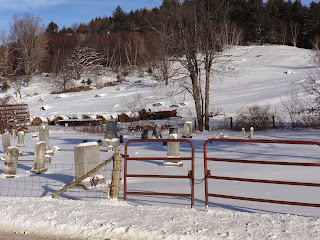 On a summer day there would be cows on the hill. 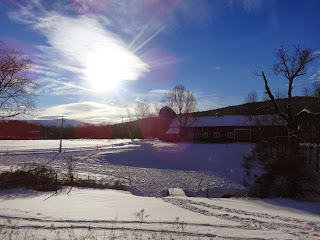 This barn could be in Vermont Life, a magazine, that
always has wonderful pictures.

Then I started up the hill.  I ran this hill on a regular basis one summer when I was getting ready for a relay I was part of. One of my legs was up a mountain road.  But I stopped after that. Emily told me it wasn't that steep or long. Well, she lied as it was both.  You are surrounded by trees and there is not much view but I just did it.  About half way up the road it opens up and you can continue or go to the left down a dead end road.  That road I had never biked on or run on.  Emily had said it was mostly flat and yes, it was.  It was also my favorite road of the day.  (not because of the flat but it was so pretty and serene) 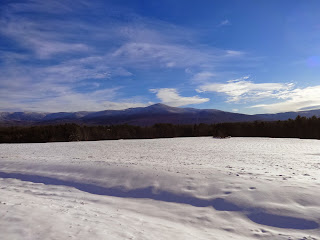 This is where you come out of the woods and it opens up. 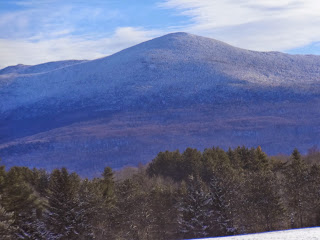 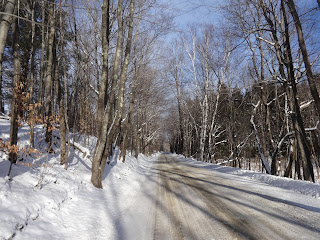 Going down the dead end road. 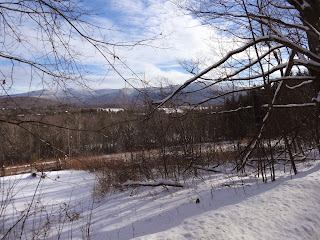 It opens up and has great views in one direction.

I turned around at the end of the plowed road and came back to the "main road."  I again headed up the road knowing eventually I would turn and be heading downhill for a change.  I did wonder in this section if I was getting frostbite.  My face felt quite cold and the turtle fur was frozen rock solid and was useless.  I wasn't particularly cold other than my face. 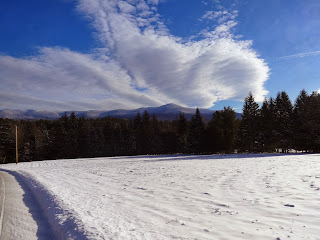 About to head up again. 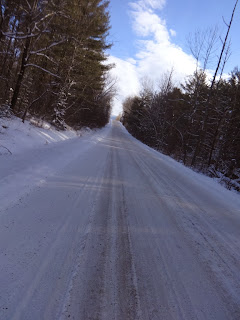 Not as long or steep as the first one but not
flat! 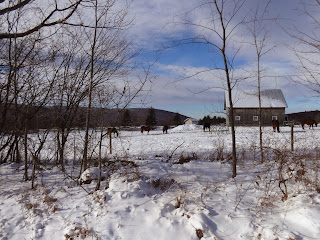 The horses must have
some pretty thick coats. 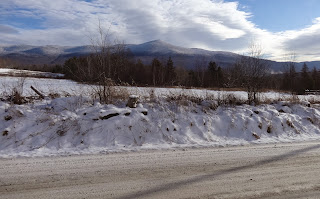 Now I head down the road. I debate going farther and straying from my original plan but I want to try new routes so I turn at the bottom of this hill and go on a road that is dirt and not travelled much by cars.  At some point on this road I check my watch and realize I won't get the 8 in I want. 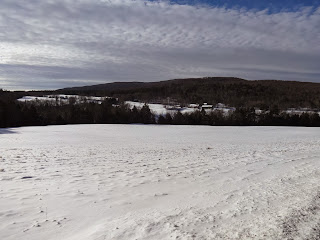 The sun is going in and out now and it's starting to get windy. 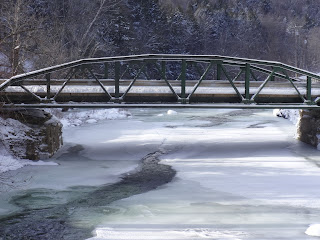 The river changed drastically in the last couple of days
and looks more than a little cold. 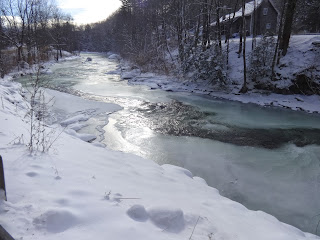 You can't see it in this picture but the ice/river  is green and quite pretty.

I keep going past my house and do get the full 8 in before I am done. Between running slowly and taking lots of pictures I was out there for quite a long time but I thoroughly enjoyed myself on this new route.

Loved all the pictures! You might want to pick up a fleece balaclava for your face.

Man it's so hideous where you live! j/k!! Lovely!!

I swear the brutally cold, snowy days are often the most peaceful. Looks like a beautiful new route. What is a turtle fur?

Marcia is right - the cold, snowy pics look incredibly peaceful. And beautiful. You live in a glorious area. Well done getting out in the cold!

That must have been an awesome run!

Oh, it looks so beautiful this time of year! Great job trying out a new and more challenging route!

I was quite proud of myself when I found the flattest 3 mile route in Burlington without going on the bike path. My road is also completely flat and 3 miles from my house to the end and back.

Wow, beautiful pictures. It's amazing how our bodies naturally gravitate to the courses that are flatter and easier to manage. Our legs are definitely creatures of habit. It's good that you got to change it up a little.

That's just so beautiful! Thank you for taking so many pictures. It almost made me forget how hot I am.

The pictures are wonderful & it appears you had a good time!

I love this post! Thanks for sharing your snowy and cold experience! Our summer is hot and humid. I really hope one day I can run and experience what you posted here...even just once will be fine :)

Great post! I have heard about the snowy weather conditions in that part of the U.S.
Those pictures are absolutely stunning!

I have just visited Char's blog where I have seen her wet blue running shirt (because of warm weather conditions there in Brisbane). Now I am visiting the snowy environment where you live. The pictures of that wonderful environment covered with snow are absolutely stunning.

+1 on the fleece balaclava. I've become a big fan of mine, and they're pretty versatile. You can pull it over your head and face when running, and you can still get it up over your face (but it won't go over/under my helmet) on chilly bike rides.

Your pictures are beautiful. Isn't it funny how we need somebody else to point out how we should be changing things up?

Both the UK and USA are having some bad weather at the moment - ours is all strong winds and heavy wind though, the temperature is quite mild.

I don't envy you all that snow and feezing cold!

Late congrats for your first race of the year!
What a beautiful landscape full of ice and snow: I can see such wonder only by pics or tv. Great photos.