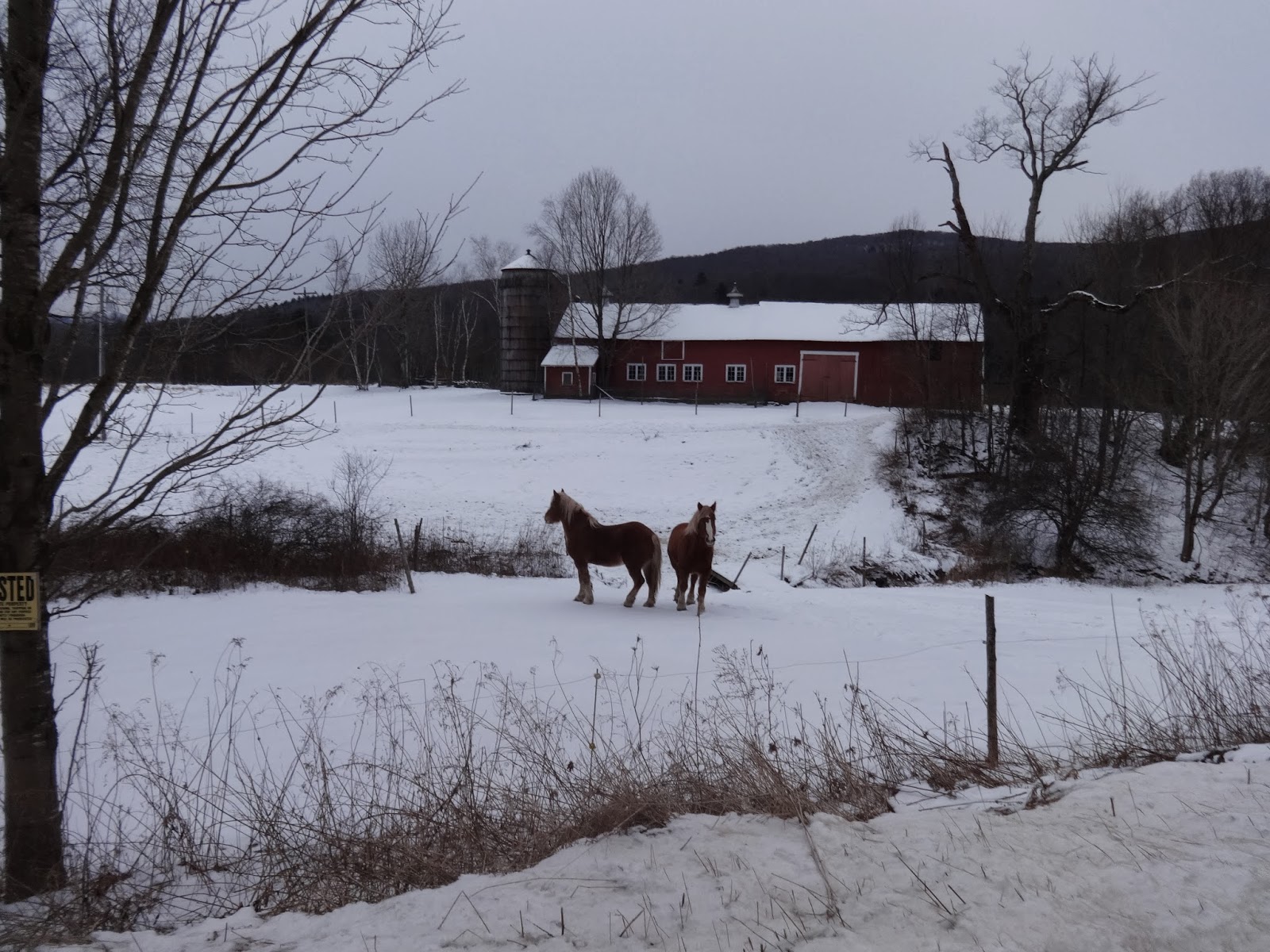 Saturday I was back out there on my new route that is full of long dirt roads and steep hills and then more steep hills.  For most of the run I was fine.

It was cold.  T came with me and she loved the route in spite of my not so fast speed on it.  There are times I think I could walk it faster but I am determined to "run" those hills.  It wasn't a particularly pretty day.  It was neither sunny nor snowing at that point.

Let me get back to the it was cold.  T usually dresses lighter than I do. She told me she had on 4 tops, two pairs of pants and two socks.  So I added more and off we went. At first I thought I was overdressed but as soon as we hit the wind I was glad of all my clothing.  The trouble was going up all those hills made me sweat a lot and I was drenched on this very cold day.  When we headed into the wind I decided my hat wasn't enough and I was thrilled that I had a top with a hood and the hood came up too, never to be taken off.

When we reached the top of the road of many hills we turned left out of the wind. The problem was we would be turning around and heading right into it.  The second problem was I was trying to get 9 in so we would be going farther before we turned around which meant we would be heading into the wind for a long time once we made that turn.

WE WOULD BE HEADING INTO THE WIND FOR A LONG TIME ONCE WE MADE THAT TURN.

Sorry, I thought that was worth repeating. When we turned around we were going down Quaker Street forever. It was down but I was too cold to appreciate the down hill plus I was watching where I was stepping - no sprained ankles for this lady.

But finally we turned and things were so much better.  I was beginning to get tired but it wasn't until the very last turn that it really hit me. I was exhausted. It was only 1 more mile from last week but suddenly felt like much more.  I didn't know exactly what would be 9 and did not want to look at my Garmin and see less than 9 because I knew in spite of my exhaustion I would go 9.  But it was 9.16. T said, "But you want to finish the .6 right?" because I always do.  I immediately said no and headed up my driveway. The fact that I didn't run .4 more to round out my distance speaks to my tiredness more than anything.

I would have plopped exhausted on the couch  once I got in the house but I was so wet from all my sweating that I just headed for the shower.

When I thought about it later I am going to blame at least some of it on being sick this week.  I was in bed for 3 days.  Once I was up I felt better but couldn't believe how tired I was. I almost fell asleep in the dentist chair!!!!! So no wonder.  I recovered some as the day went on but couldn't stay awake for all of the Breaking Bad episode we were watching (Walt is not a very nice person.) and was in bed at 8 on a Saturday night. 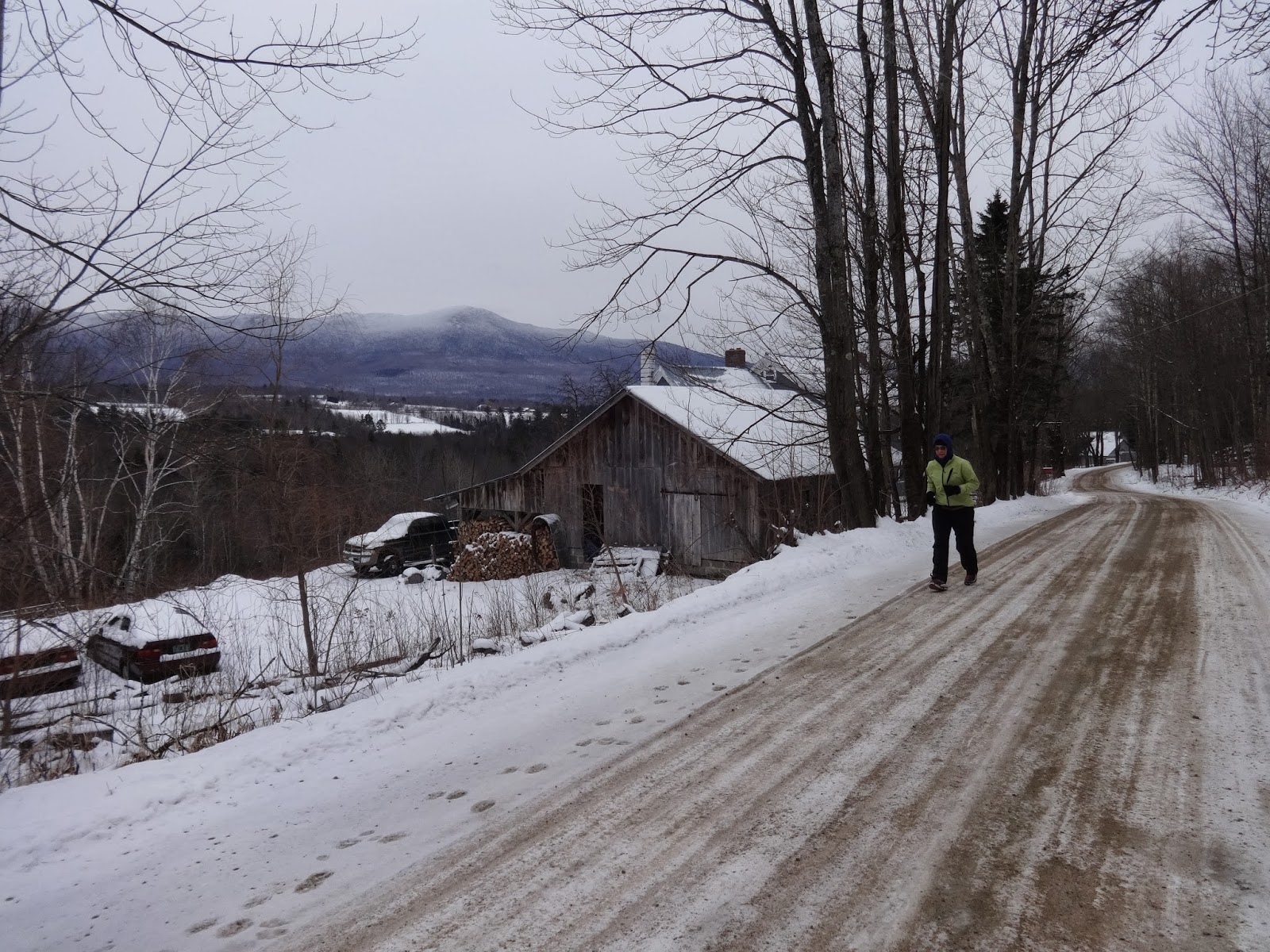 I finished my week with the swim I missed due to being sick. I wasn't sure if this was going to happen but it did and it was great. Relaxing.  Satisfyingly tiring.  Heaven in the hot tub with my book! 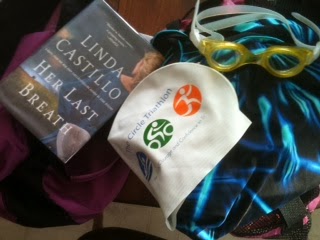 Some of you asked about when I was a character in a book as mentioned in my last post. I promise I will get to this this week. I had blogged about it once upon a time but I can't find it - probably part of a TTT post.

Tough run! It's hard for me to wrap my head around the fact that you're so hot that you're sweating buckets but still have to pull your hood up because it's so cold. We just don't have cold like that. When it's winter here I just put up with a bit of cold at the beginning of the run and warm up once we get going - wearing a t-shirt. If it's really cold I wear gloves (which have to be taken off before the end) and a long sleeve shirt.

Oh man, the SINGLE thing I hate most about winter runs is the wind. And it has been especially windy this year. The weather people said our average wind speeds are up 23% this winter. Of course I'm sure it's because of some "end of the world" change to the polar caps because of people smoking cigarettes or something, but I digress. Yeah, wind is horrible.

First,sorry you were sick this week.
Second, damn good run in cold weather. Color me impressed! I would have just headed to the treadmill but then I am treadmill runner. Finally, have a great week!

Isn't that aggravating? I got my 9 miles in and thank heavens the temps were probably in the low 50's, but I also had to contend with the wind. I'm sure your exhaustion was due to being sick. Glad you're feeling better now.

Oh man, that sounds BRUTAL. I'm so impressed that you stuck it out outside. No way I would have without company, but even with a friend wind SUCKS. And I'm sure the fact that you'd been sick made a real difference in how you felt.

In my half yesterday, there was a 2-mile long uphill. The only mile that was as slow as the second on the hill was my very last mile...which was directly into a nasty, check-your-feet-to-make-sure-they're-still-moving wind. Yuck!!

You are really a bad ass Andrea! I'll remember this story when I have to do my morning run this week and my bed is too comfy. I'll have you to get me out of bed because our weather isn't half as bad as yours is.

That sounds really hard. The wind is certainly my nemesis sometimes and in winter it is just so much worse. Well done!

Sometimes we must endure Mother Nature, although I am not sure why those horses aren't in the barn. If I was a horse, that's where I would be.

I hate being cold and wet while running too. Nice job toughing it out! I'm impressed to say the least.

I love the horses in the snow picture. Way to tough out a hard run, brr. You made many mental and physical gains with this one!