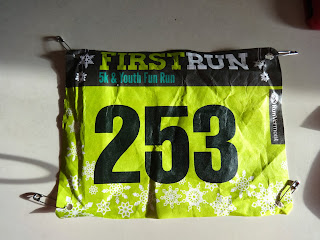 I'm not going to list all my goals as I tend to have a lot.  Here are some of them.


Numbers 2013
I swam slightly more than 62 miles. This is A LOT for me and it happened because I couldn't do anything else for quite awhile with my sprained ankle.
I ran slightly less than 1000 miles (987).  I have never been under 1000 before. But I was close and did a lot overall.
I biked 1980 miles. Woot! Woot!  These were my favorite miles for sure.
So overall I had over 3000 miles that I moved my body!!! 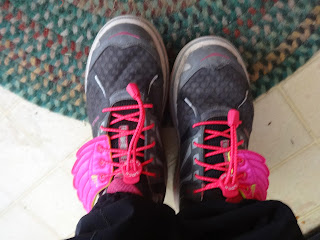 The extent of my "costume."  New shwings.  I also
used lock laces for the first time.  Loved them. 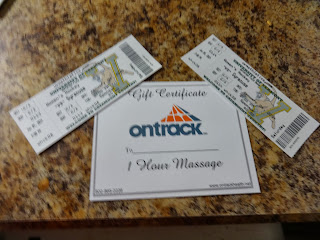 It's always fun to win something.

I've already got one race under my belt.  We always do this one and by we I mean my husband does it with me.  It was about 11 degrees with some wind. Yes, it was cold.  My goal was to finish under 30 as that doesn't happen as easily as it used to - at all!  My miles were 9:58, 9:55 and 9:05.  I guess I finally warmed up.  My overall time was 29:57 (last year 29:56)  Last year that seemed so slow to me.  This year it didn't.  But I am going to try to speed up.  We'll see.  There were lots of costumes and sometimes I take pictures but it was too cold.  It was not fun being passed by gift wrapped boxes and giant bears!  After we went to visit Jameson and Jaxon which is always good.  Plus we both won random prizes.  I won tickets to a hockey game. Trying to give them away.  Hubby won a one hour massage which we gave to Jameson.  Always fun to win. This race posts all the prizes and numbers on the wall while we are racing. There is no waiting around for random draws!  Love it, love it, love it!

Thinking about what other races to sign up for.  I'll do the Polar Dash I always do in early February.  I'm seriously looking at a half on the ocean in March. It is good timing for me.

Yay for lots of body movement! It's been years since I've done a race with a raffle. The ones around here are so chintzy and sparse. How great you're going to Alaska. I wanna go back! The weather here is so horrific today (at least a foot of now and still coming)I can't imagine racing.
Happy New Year!

Alaska is breathtaking! My family & I took a cruise to Alaska. Most of the ports we had excursions that took the entire day, except Juneau. I was so excited to get outside & off the ship to run, that I didn't even notice I forgot to wear my Nano for music until I was almost back to the ship!
Have a safe and fantastic trip :)

I also try to run a race a month ... at least :) Your running plan is really exciting! I wouldn't mind running a race in Alaska.
Happy New Year!

You are SO going to love Alaska. I am bookmarking that post right now because I know the pictures are going to be AWESOME!

The last time I did a race with a raffle I won...a ruler. Yep. Lame. Hahahaha

You are going to Alaska in the summer??

Alaska!! So cool! My niece just moved there with her boyfriend. I'd love to visit some day.

Your numbers look huge to me. My running numbers are probably nowhere near yours. Like probably under 500 miles. I need to work on consistency. And strength training is on my list, too. We'll be so in shape by summer vacation...

You've already done one race?! You put all of the rest of us to shame. I haven't even really planned what races I want to do this year yet. All I know is that I don't want to race until it cools down a little.

You did great in 2013. I am always admiring you for how much you exercise throughout the year.

I haven't planned any races but I did write down all the races that are held in my area and I'll decide short before the date if I'll do it. There's only one in June that I really want to do but haven't signed up yet. This year is all about enjoy running for me.

Your mileage is fantastic. I don't know how you find the time for all those bike miles! I was aiming for 1000 running miles but missed by a long shot after I hurt my ankle. It'll still be a goal for 2014.

Well done on the race!

You had an awesome year! Your mileage is incredible. Looking forward to hearing about all your adventures in 2014! Especially your Alaskan adventure! So cool!

A well-rounded list for the year! Alaska is on my to-go list too. We were thinking this year, but it'll probably be delayed another year (or more). This year I have running camp (for adults)! in the summer and I'm not going to Alaska in not-the-summer... :)

I don't know if my laces are Lock Lace brand but I love the concept! So much easier.