I Skipped My Run on Saturday

I skipped my run on Saturday which truly is unheard of for me.  I thought about running on Friday morning but I have a cold and it was in my chest and don't they say not to run when it is in the chest? So I didn't run. I thought I might squeeze it in late Saturday but that didn't happen.

What was important enough to miss running? Well, my husband wanted to go to.............. The Strolling of the Heifers.  He rarely just "plays" for the day so I was game to go with an additional trip after.  It took place in Brattleboro, about  3 hours away so there was no time to squeeze a run in and get there in time.  (I don't do dark runs here in the country.)

So what was this strolling thing and was it worth it?

It was a parade of cows and other animals.  The parade was almost an hour long - no fire trucks, just farming related floats and clubs and bands.  Well the bands weren't farming related.  This whole thing is  a big thing in Brattleboro and there are actually events for 3 days. We saw the parade and went to the farmer's market.  We each bought a shopping bag to store all our free loot in.  It was raining at home and sunny there so that was a score too.  Here are some pictures of the event. 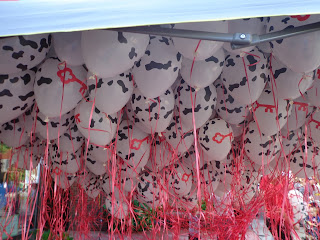 Everyone there had at least one cow balloon. 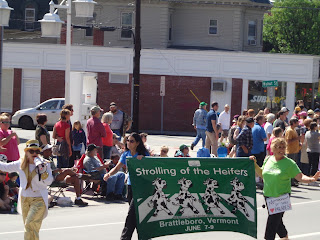 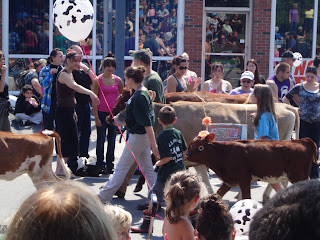 Some of the cows. There actually weren't as many cows as I expected. 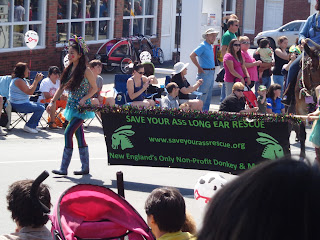 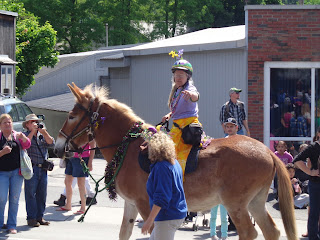 Easily my favorite. These asses were HUGE! 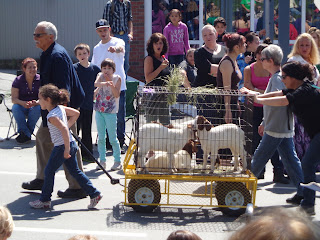 I have wanted a baby goat for a long time. 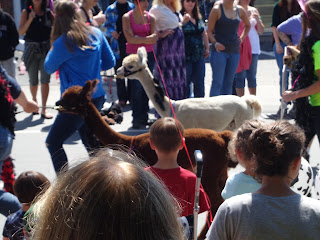 These are alpacas, not llamas. Very cute. 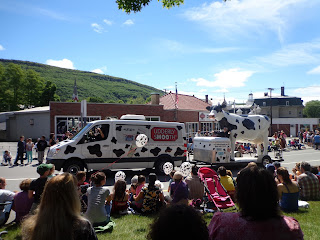 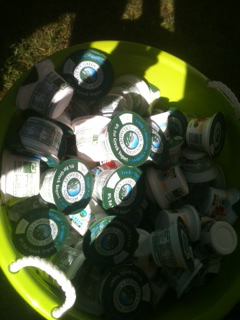 There were lots of free samples on the park
including Green Mountain Creamery yogurt
with lots of maple!  The stores
are always out of it.

Then it was time to leave and head up the road. What had I wanted to do? It was time to visit a brewery and get another stamp. So we found our way to Harpoon Brewery which was a very happening place on Saturday. It was packed right from when we got there.  We started out with some samples, bought a beer we liked and then took the tour.  Then we had to have lunch to soak up some of the beer we had had.  I discovered some new beers I like which is what they are hoping as they give you all those samples. We bought a few six packs to bring home and some pint glasses in the retail store before leaving.  My husband drove home as he didn't have one more beer with lunch!  All in all a fun day with no running, biking or swimming! 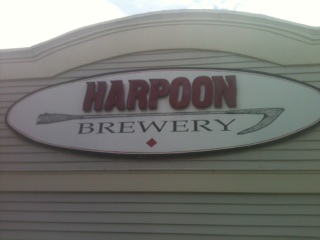 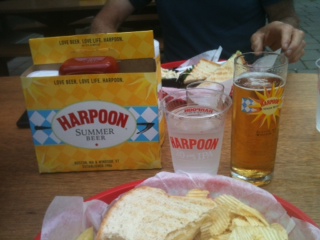 Free samples. Sounds like it was well worth it to me. Who doesn't love free stuff!!

I have never heard of anything like that parade! (Not a lot of livestock where I live!! :) I'd say that's definitely a great reason to miss running!

Lovely day Andrea. Sometimes doing fun things with your husband is totally worth skipping a run. The roads will always be there waiting for you but events like this don't happen every week. The strolling thing looks very fun.

My daughter's favourite beloved toy is a cow and she would LOVE those co balloons! I must try and get some for her next birthday...

That looks awesome! We don't see parades here by us. Not in Johannesburg anyway. I would enjoy the farm related parade.

LOve the cow balloons! But were there pigs? Thing 2 is obsessed with them right now. Feel better!

Those cow balloons are super cute!

That parade is awesome! I bet it was especially fun for children.
So cool that you went to the Harpoon Brewery. They had a tent at the Brew at the Zoo that I went to in May. It was really good!

Love all the fun pictures of the parade! Have you thought about getting a pygmy goat??? That way it stays a "baby" its whole life! :-) Or how about a pot-bellied pig??? Could would be jealous! Sounds like you had a fun day out with Mr. AJH. It is good to have a complete day doing something unrelated to running, biking, or swimming - keeps your mind fresh. Feel better!

Fun is important. Glad you both had a nice day. I love the cow balloons! I want one! (I grew up on a farm and miss it, can you tell?) Sometimes I think that as runners we often forget that there is a whole world out there that has nothing to do with running. It's nice to be reminded, and thanks for that. Cheers,

This is a Nice post! Glad to hear you both had a great time! We, runners, wouldn't have to forget there are as interesting as running.