Five "Fascinating Things" on the day beFore Friday

1. I confess I biked on National Running Day. I am running 4 days this week but I ran yesterday and today the weather was great so I wanted to bike. Tomorrow it is going to be raining.  I guess I could have biked yesterday but this is how it all shook out.  I had a wonderful ride that finally had a little speed in it (for me.)  It helped relax me after one crazy day at school.  So much to do for the end of the year. 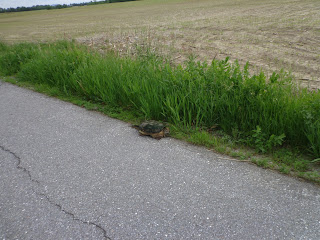 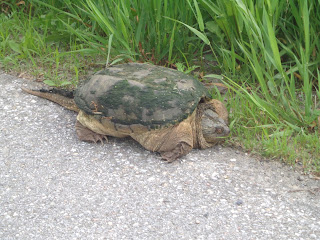 2.  We had a talent show at school today. It was what you would expect for a talent show of 4th, 5th and 6th graders but still very fun to watch.  One of my former students did a comedy routine for the second year. He actually has pretty good timing and looked ever so sweet dressed up with a bow tie.  My favorite joke of the day......


Why did the man with one hand cross the road?
He was going to the second hand store!

3. I just finished a very good book.  It was my gym book.  I always have a book I keep in my gym bag that I only read at the gym. It tends to be non fiction often about running or a biography of some sort. I only read during my warm up and cool down (and a break if I want one) so it takes me a looooong time to finish my gym book.  The book I just read was In the Long Run by Jim Axelrod.  I'm feeling lazy so here is what Amazon has to say about it.  The last sentence really sums it up.


It’s 2008. Jim Axelrod—once among the most watched correspondents on network news and the first television reporter to broadcast from Saddam International Airport in 2003—is covering the final stages of the race for the Democratic presidential nomination. He’s forty-five years old and thirty pounds overweight. He’s drinking too much, sleeping too little, and scarcely seeing his family. He’s just figured out that the industry that pulled him up the corporate ladder is imploding as he’s reaching for its final rungs. Then, out of the blue, Jim discovers his late father’s decades-old New York Marathon finish times. At forty-six, Bob Axelrod ran a 3:29:58. With everything else going on in his life, Jim sets himself a defining challenge: “Can I beat him?”
So begins a deeply felt, often hilarious, quixotic effort to run the 2009 New York Marathon. Along the way, Jim confronts his listing marriage, a career upset by the seismic changes going on throughout the television news industry, excruciatingly painful shin splints, and the worst-timed kidney stone possible. Looming over it all is the shadow of a loving father, who repeatedly lost his way in life but still has a lesson to impart.
This is a book about a dead father’s challenge to a son at a crossroads, but, more than that, it is about the personal costs paid when ambition and talent are not enough to ensure success. Most fundamentally, though, it is a book about learning what it takes to be happy in your own skin.

I'd love to share this book with someone who thinks they would enjoy it.  I'll send it to the first person who lets me know (USA please, sorry).  Then that person can pass it on also.  I won't get to it until after school is out but I will get it to you.

4. I have something I'm looking forward to at school.  I'll let you know about it once I've done it.

5. A couple of recent pictures from my porch.... 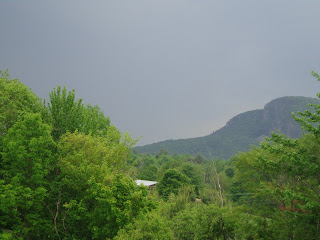 The sky before the storm last weekend. 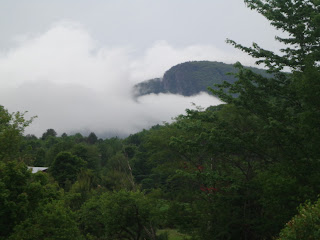 Tonight..this is a very unusual sight.  Just liked the looks
of the clouds in the valley below the mountain.

What do you mean you biked on National Running Day?? LOL....I think it's ok.

Love the turtle :) of course I do.

I want the book!

You know I did nothing on national running day, not even bike or walk.

Your pictures, as always, are really pretty.

I would love to read the book! If I'm too late maybe the winner can share it with me??!!

Beautiful pics of your environs. Glad you. Glad you enjoyed the National Running Day.

Love the turtle but he looks a bit intimidating! We saw a large snapper while kayaking the other day. They are so crazy looking!

I biked on NRD too! We are in a secret club of cool cross training kids and that's how we roll ;-)
That turtle does look a bit ornery. I generally love turtles but might not leap at the opportunity to pick this one up!

I love the image of kids telling jokes at your school talent show. There's something so cute about children dressed up and acting as comedians!

Look at that turtle! Is that moss on his back? He needs to move faster :)

I love turtles! Beautiful pictures - what a great view from your porch!

You live in such a beautiful place! (Also I biked on national running day too--I am loyal to the training plan...)