My first running morning in Connecticut I more or less wound through neighborhoods trying to get to 4 miles. After a bit I went out onto a more main road to try to get there and lo and behold first I found this..... 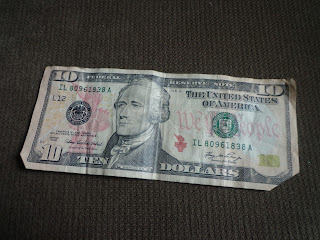 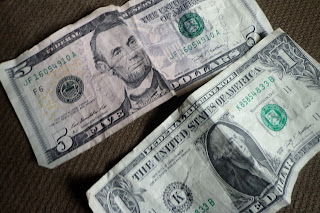 That's the first (and probably last) time I ever found money on a run!  Great fun.  I went the same way the next day but no such luck again.

We also went on a bike ride on one of the rails to trails around there. It was fine but not something I would pick a lot.  I like water by my rails to trails.  I did love getting on my bike and ended up doing about 20 miles. It was incredibly flat which was a bit of a treat.  It wasn't crowded because we went early although it got quite crowded by the end. 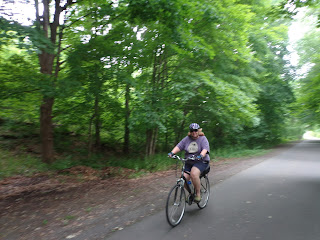 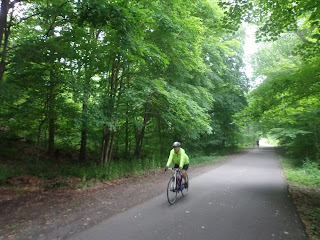 Later we drove to Poughkeepsie for a walk on the world's largest elevated pedestrian bridge. It was very cool and very wide.  It's been there since 2009 and was very smooth so people pushing wheelchairs had no problems on it.  You could see the Mid Hudson Bridge from it which I assume is half way between Albany and New York City.  The Hudson was wide here although according to all the historical markers on the bridge it is much wider in some other spots. I loved all the history it told. This would be a great place to bring a class. You could do  a scavenger hunt for information but the kids could run and move!  It would also be a great place to ride and run as part of your route. 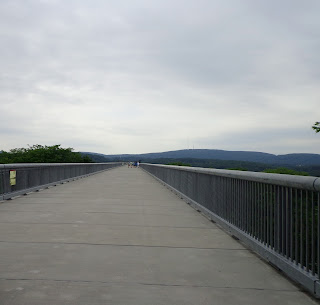 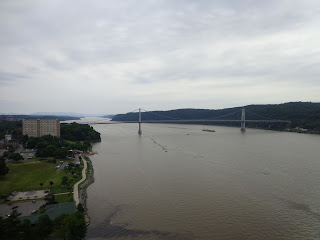 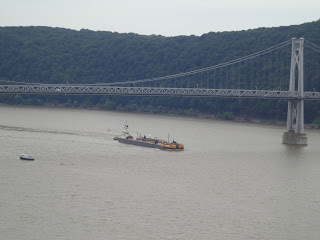 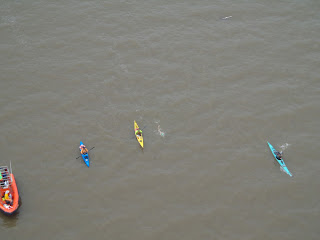 There was the 8 Bridges Swim Race going on and this swimmer had swum 19 miles I believe. Each day the swimmer swims from one bridge to the next and the legs vary from 13 to 19 miles.  The water is somewhat disgusting looking and certainly nothing  I felt like  getting into for a short swim to say nothing about 19 miles.  And I can't even begin to imagine how long it would take me to swim 19 miles if I were even able to do it. 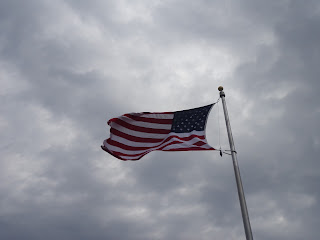 The next day I had one more run before heading home and was rather giddy at the school busses picking up students when I was on summer vacation!!!

I can't believe how much money you found on your run! Lucky day! And um swimming 19 miles??? I have no words to even respond to that...my jaw is on the floor just thinking about it!

You are apparently in my neck of the woods! The Hudson can be gross but we caught and ate crabs out of it while I was growing up and I have swum in it the past two yers during Toughman (in Croton so a bit south). Next time you should try to ride the bike path down to NYC!

You are apparently in my neck of the woods! The Hudson can be gross but we caught and ate crabs out of it while I was growing up and I have swum in it the past two yers during Toughman (in Croton so a bit south). Next time you should try to ride the bike path down to NYC!

Nice find on your run! Loved all the pics. Sounds and looks like a fun trip.

How excellent to score some cash! Donut money!

$16 dollars would pay for a pretty nice morning or afternoon tea. What a score!

Money! Come on, tell us--what did you buy?
P.S. Glad you had a great trip.

I love it when I find money! That was a lucky run indeed! The bridges are amazing. I love bridges and especially train bridges. Thanks for the photos!

nice find! i am lucky to find a quarter... a whole quarter! lol.