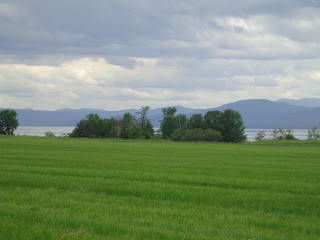 This is early in the bike ride near one of the state parks.

I'm behind here and still writing about last weekend. It was truly a great weekend, no time spent at work, a fun day out and about with my husband and then the farthest bike ride of the year on a pretty nice day.

Much of it was along the lake.  I was alone so could go at whatever pace I wanted and stop when I wanted.  I had enough snacks for at least 60 miles and knew I wanted to go farther than 56, my last long ride distance.  The route I was taking was around 50 so I planned a few places where I could add a few miles. 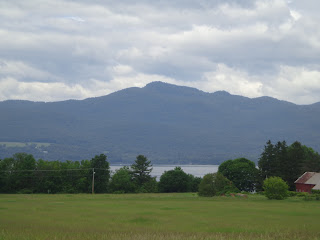 I think I have taken this shot before. You come over a hill after being
on a dirt road for a bit with no special scenery and then
you see this.

I did need to go to the bathroom early on and managed to find a spot "off the road - sort of" and thankfully no cars came along.  I wasn't sure how far south I went but I kept riding until I came to a dirt road and knew that wasn't the route I wanted.  I was on a road I have ridden on and it had been awhile since I had been there.  I knew I wanted to cross the Champlain Bridge and I planned to add some miles in New York before I headed back into Vermont. 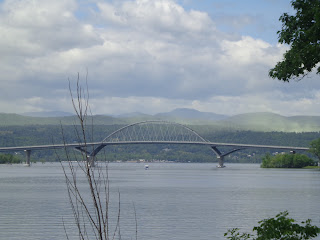 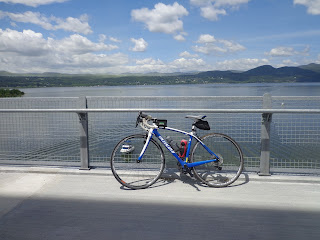 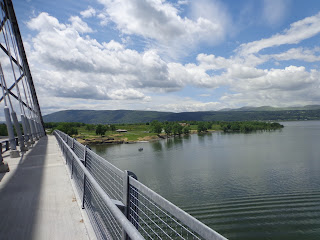 I always unclip when crossing the bridge. Riding in a small space
makes me a bit nervous. 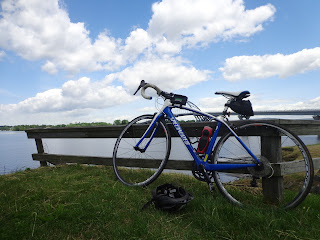 I am lying on the grass, relaxing when someone near me
finds a snake. I decide I am quite rested and jump up and get
on my way. 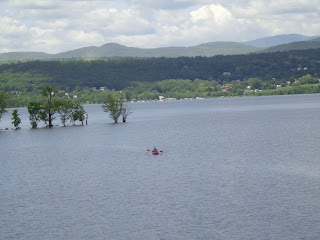 Another score of a very clean port a let before I leave Crown Point, New York.  I know I have about 20 miles left but am not feeling tired yet, just glad to be out there riding. Last time I rode by Goodies I think it had just opened and the line was huge so I didn't stop but today it was just a few people so I stop for a creemee. 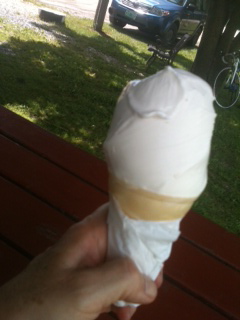 I get back to my car and I am not quite at 60 miles but I ride for a half mile or so in the parking lot (I can't be the only person who does this) until I reach 60. I have only gone 4 miles farther than last time but I am not overly tired and think I could do more!  A good way to end. 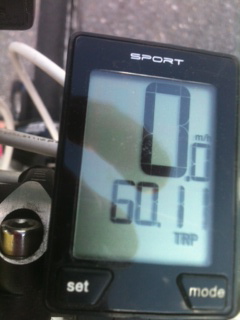 Something has come up sooner rather than later.  Last year I had the goal of riding a century but then I broke my wrist and never got my mileage quite back up there. But I saw that in less than two weeks there is a ride in the Islands where I love to ride.  There are choices of 25, 50, 70 and 100.  I have done all the rides except the 100 one although I think I have ridden almost all the route at different times. I really wanted more miles under my belt before I attempted a century but
I do know other people doing it but they are doing different distances so I won't be seeing them as I think we start at different times. Or they are much faster and I won't be seeing them.  The ride coordinator assured me time didn't matter and I wouldn't be holding anyone up. They want people to enjoy the day and the islands. So I signed up and I am going to attempt it. Yikes!

You're going to do great. It'll be an awesome day. Love that you were feeling so good after 60!

Gorgeous pictures!! I think you'll do just fine with the 100 miler, if you can finish 60 feeling great, 100 will be nothing! Well, almost nothing :). Glad you signed up!

Great to hear about your registration! I think you'll enjoy the 100 miler and its location.

I thought you would do a century ride. Great news!

I love that you stopped for an ice cream! I think that would be the only way that I'd get thru 60 miles- 30 is my max right now (I bet I could make it a bit farther but I motor along trying to keep up with super speedy Eric. who calls these rides "easy!" UGH!)
Great pics as usual :-)

The 60 miler looks great and the 100 miler in the islands will be awesome, so pretty up there!! The new bridge over Lake Champlain looks great, will have to try to get up there this summer and do a long VT/NY loop ride to see it up close...

Gorgeous photos, as usual. I laughed at your snake comment!
How exciting that you signed up for a century! Can't wait to hear how it goes.

ooooh! best wishes with the century!!!!

You can do 100 miles. I have total faith in you and your trusty bike.