1.  Yesterday I did a short ride where I had no pizzazz whatsoever! It could be because I ran 9 miles in the morning first. I didn't think it took it out of me but I guess it did. It was a decent run - cold temps, pretty sights and no GI problems!  It was slow but I'll take it.  Then I went to the dentist and spent a lot of money before I rode.  Maybe the shock of the bill took all my get up and go away.  All dental insurance is long gone so it's on me.  But I did get a great picture of the beautiful ride I was on. It is a ride I repeat often the beauty of yesterday left me no doubt of why I do. 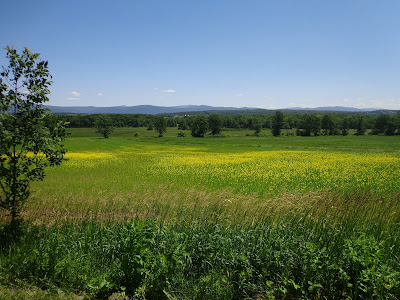 2. I had some pizzazz back today but it took me forever to get going. I almost always get out in the morning to exercise when it is my choice but today I found lots to do first. Truthfully it was rather cold out and I was also waiting for it to warm up. By the time I got to the lake it was close to 2 and the beach was more crowded than when I am usually there. It took a lot of nerve for me to put on my wetsuit and enter the water. I felt foolish in a wetsuit and cap and goggles like I am some super swimmer when it is the complete opposite.  First I wasn't positive I would be able to get it on. When I got it half way I thought that was it but I managed to finish the job. I headed for the water as all the kids around stared at me and who was to blame them?  Brrr. The water was cold and the wet suit wasn't just for my confidence.  I swam back and forth a couple of times.  Truthfully I could have gotten out after 5 minutes and felt I had done a good job. I forgot my watch so I don't know how long I swam but decided it was a fine amount and headed out. Some kid went, "Wow, have you been way out?"  I told him no, I had been quite close by.  Then I changed and got ready to ride my bike. I did swim, bike, run but I did not practice transitions. I took my time between things and as I just said, even changed.  It took me  a little bit of time to get into the "racing mode" but I did and enjoyed the whole ride.  While not fantastic, my pace was better than it has been this year so I'll take it. Then I had a snack, went to the bathroom and changed my shoes to get ready to run.  Even though I had given myself some time I still felt like my legs were very heavy.  My first mile was quite slow but I picked up the pace a fair amount on the next two.  The first "half" was farther than the second half so I don't know how accurate the pace was. I did think I was going farther than the real amount but it felt good to pick up the pace and give it a good try following the swim and the bike.  I am still trying to decide if I am signing up for a tri the next weekend. Today made me think I probably will.

3.  This weekend is getting closer and my attempt at a century. I am a bit worried about the weather as afternoon thunderstorms are predicted.  Other than that the day sounds quite good. But will I do it?  Time will tell.

Oooh an impending century! Excited for you!

It'd be really awesome one day if you showed up one day at the lake all decked out in your pro swimming gear and then put on floaties and a swim ring. That would get the people at the lake scratching their heads.

Nice workouts! You probably were far out in the kid's eyes. Out where you can't tough the bottom anyway.

Great training! I love it when others clearly wonder about what I'm doing. I often find people on the trails that can't believe I run there for fun. You will certainly do a tri. I think you really enjoy it. Have a great weekend and enjoy the riding!

Wow, you are brave going for a training swim in a lake in your wetsuit. You train so hard, it makes me want to up my game!

I thought it was that weekend! Hopefully it's a beautiful day for you...if not, maybe it'll at least be a good story. :)

Great job at pushing yourself. I absolutely hate that heavy leg feeling! I want a cure!

What a wonderful countryside! I love that yellow carpet: that's really a Beautiful picture!

It's Great to hear your training is going well.
Have a nice weekend and an exciting ride!