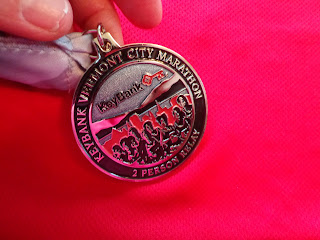 My favorite VCM medal ever


Great day - lots of fun in spite of the weather! 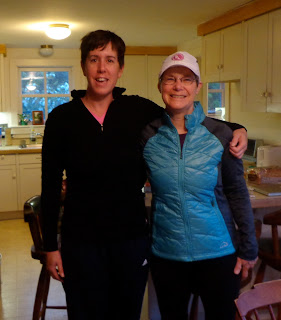 Before the race with Sara - what I was going
to wear 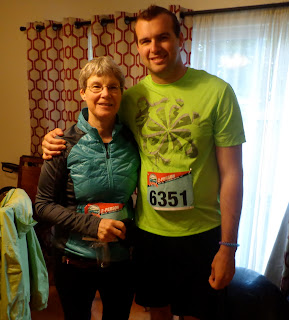 Jameson's clothing choice - we look like
we're in different climates

I agonized over what to wear but there was no getting it right. With temperatures that stayed in the low 40s and a steady drizzle there was nothing to do but suck it up and be wet and cold!  As you might guess the worst part was waiting ahead of time. I was so glad I wasn't doing the second half and waiting around forever! 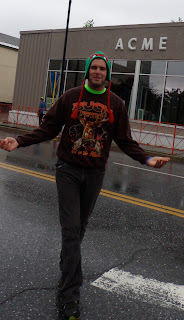 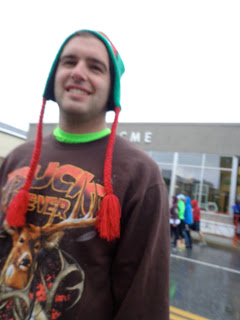 We went to Jameson's office and used the bathroom and didn't head for the start until we had to where I once again  had to go and got in the porta pottie line which was the slowest moving ever.  I barely made the start and then..............we were off!

I wore a jacket I would never choose to wear but it was my throw away jacket. Trouble is I never warmed up enough and wore it the whole way so it has lived to be thrown away another day.  Same thing with my mismatched gloves.  I took them off when I was done and my hands were instantly cold. It's amazing that cold wet gloves provide warmth.

During the race I really wasn't overly cold and there were times it was hardly raining. I didn't see a lot of people I knew. Jameson thought the spectators were really quiet but I was amazed at the number out there on such a miserable day.  A friend of mine went and I saw her a couple of times.  My husband went and didn't manage to see Jameson or me but earned forgiveness by giving us a ride almost to the finish line to finish watching the race. I had walked to Jameson's after to SHOWER and change my clothes.  Most.Wonderful.Move.Ever! 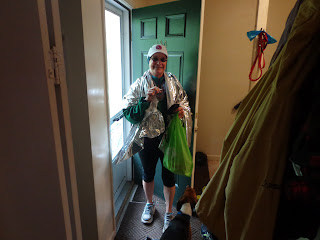 Done......about to take the best shower ever!

I'm rambling so I'm moving on to bullet points about the race. 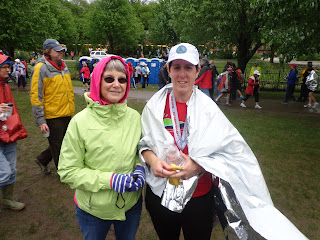 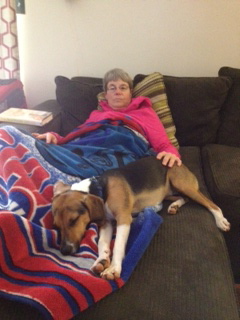 A very similar picture to the one after
Unplugged 6 weeks ago.  Love
my Jaxon! 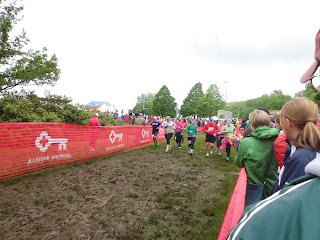 Incredibly muddy at the finish..... 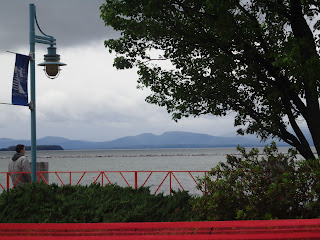 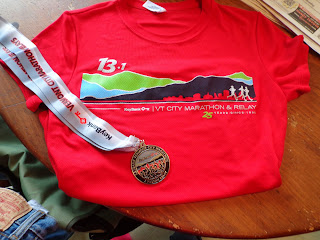 Nice race! I'm confident you'll get your speed back, and even though it was a tad behind last year, still a good race. That's funny about the difference in clothing between you and Jameson - I'm a notorious over-dresser for races. Most races I look about 20-30 degrees colder than everyone around me.

Looks like you hit your goals and had a great race.

You have run quite a few halfs, that's awesome! I think the ankle flexibility can be improved with some exercises. I've been looking up ankle flexibility stuff right and left since I know that's something I'll need to rehab once I'm able.

Not having Emily there was probably a weird feeling for you, I know she would have wanted to be!

We had nothing to offer for wet conditions - rain? What's rain? :-)
Glad you had fun despite the cold, wet weather. You live in such a beautiful state - I can see why this race is one of your faves! You will get your speed back - it just takes time to rebuild and get the ju-ju back - it will come. And so what if it doesn't??? You are still out there having a good time and that's what counts! Ah, some relaxation with your grandson, Jaxson. He is such a cutie!!! Recover well and get excited for triathlon season - woo-hoo!!!

But it sounds like you still had a good race despite it!

It must have been horrible weather if you didn't get rid of your jacket for the entire race. I've never run in conditions like that. It's more often that I over-dress and end up too hot.

Well done on such a good run in awful conditions.

THere's nothing better than a warm, snuggly puppy (and cupcakes) after a cold, wet race. Glad it was still fun despite the weather.

Way to tough it out in the rain! It's surprising how not that bad it is (at least, never as bad as I *think* it'll be) until you slow down/stop. Then yikes!

Super nice to get to have a hot shower right after! I can't wait til tri season to hear about all your races!

Congrats on a great half, I think you did great especially with this kind of weather.

At least the GI problems were afterwards instead of during. I still have IBS problems but weirdly enough never during a run, thank goodness.

Glad you had a great time and cuddling with Jaxxon afterwards is the best reward.

Brrrr! Well, at least you had the jacket and the gloves and it sounds like everything went really well! Congratulations!

Congrats on a great race in spite of yucky weather!

Well done! I'm certainly sold once more to come run in Vermont one day. Seems like you had a great day of running and fun. Lovely shirt and medal. Enjoy some rest!

Congrats on the finish! Three halves in 7 weeks sounds exhausting. You deserve a good rest. Before you know it, it will be time for another race!

Congrats on a good and challenging half ... considering that you ran part of it through the hard rain.
I love that red shirt!

Glad you survived the cold and rain. How awesome that you were able to shower right after your race!
I love the shirt and medal. And the picture of Jaxon helping you recover.

Awesome race! I dress like you for cold weather races these days. I hate being cold.

Funny you said the pic of you and Jaxson looked like the pic from six weeks ago because when I saw it, I thought, hey, I've see that before and had to make sure I didn't already comment :-).

Wow, that is a really nice medal and I love the t-shirt too. I've never done a relay but it seems a great idea. Congrats on great running!

Yippee! Great race. I think it's better to have fun and enjoy a race than to worry about a PR.
Hope it's warmed up.It was 74 here today--so awesome.
P.S. Love that you included your cupcake choices.
P.S.S. Wasn't your son cold in just a tee-shirt?

Looks cold for May! Great job! Haven't run a 1/2 in Vermont yet. I'd love to run it in leaf peeping season!