Saturday was the most perfect day weather wise here. It was sunny with blue skies and a perfect temperature.  I was determined to get in the 50 mile bike ride I haven't had yet.  I had my route all planned when someone suggested a different one but I am not always the most flexible person so I stuck to my original plan. I had been looking forward to it.  I went on some favorite roads I don't go on often. This was one of them although I realized I usually am going in the opposite direction. 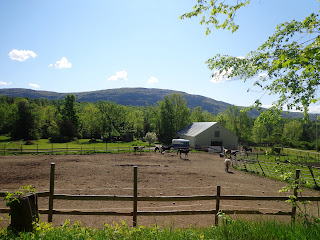 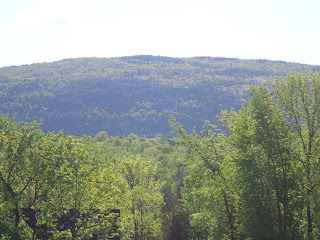 I was thoroughly enjoying myself, stopping to take pictures when I wanted with no worries of holding anyone up.  I did start to feel tired around 25 miles and wondered what was up with that as when I rode 45 miles a couple weeks ago I hardly noticed it. The day was just beautiful. 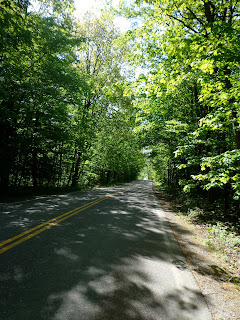 My first snack stop was when I first got to Lake Dunmore (the scene of one of my tris last summer.)  I found a great place to sit and sat basking in the sun and enjoying the day. 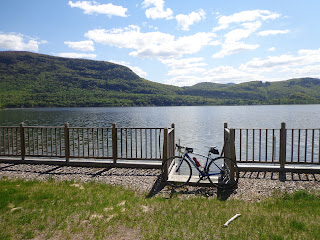 My plan was to ride around the lake.  The last time I tried this I got lost.  But this time - even though I almost made the same mistake I managed to do it right. I haven't been on the back side of the lake in years.  The road was mostly dirt but it wasn't a problem.  There were a lot of people around getting camps ready for the summer and I was beginning to look for a bathroom spot - the number one problem on long solo bike rides.  I eventually came to Branberry Beach which isn't open yet but there were a fair number of people there enjoying the day.  I had more snacks even though I hadn't even gone 10 more miles, it was just such a great place to relax and enjoy the day. 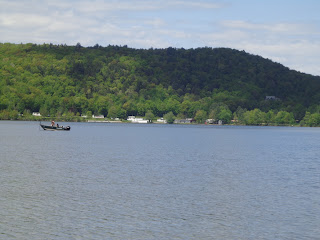 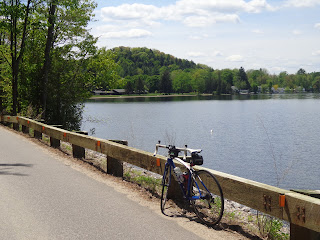 My bike is looking back toward the beach thinking
about how to do better this year in the triathlon.

Once I started off again I only stopped once to take one more picture.  The trouble with riding roads you are familiar with  is you dread the hills you know for far too many miles. There were two I was thinking about and they didn't disappoint. One in particular would have been hard no matter what but at mile 52 it was downright awful!  I was feeling very tired and ready to be home. I told myself I could walk up my driveway - the small things we can look forward to.  The last four miles to my house are uphill and they aren't horrendous but being as tired as I was they seemed more so yesterday.  But I did it with 56 miles in the books. Right now I can't imagine doing 100 but maybe I can build up to that.  I was useless the rest of the day! 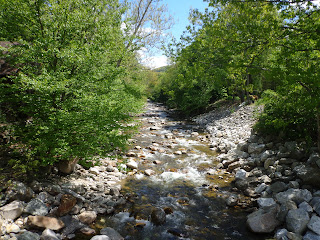 Today I got a bunch of stuff done before my VERY SLOW 8 mile run. I could tell I was still tired. Note to self. Don't take a long bike ride next Saturday before Sunday's half marathon!

You make me want to take my bike out! Glad you had a lovely day and got to enjoy it. Love all your photos.

You might have been tired the next day but what an achievement. Sounds like a wonderful way to spend the day.

I could NOT ride that far on a bike. Great job. And really beautiful photos - how fortunate you are to get to ride there on a regular basis.

Your pictures are gorgeous! I want to come to VT and ride bikes with you!!

It's funny what you said about dreading the things you know are coming. In my race yesterday, I was worried the whole first lap about a section I hadn't been able to clear a couple years ago (last time I rode there). Happily, this year I could do it. :)

Can't imagine running 8 mi today, though. You're tougher than I am.

Gorgeous! I need to spend more (some!) time in your lovely state! I too definitely feel fatigue running after a long bike ride.

Yay for breaking the 50 mile mark!

Awesome job it did look like great weather for it!

I can't wait to get out there again. As I sit here casted up I can only think about how hard it is going to be to regain my fitness.

Wow, beautiful views. My longest ride is 20-something miles, I think it'll be a while before i get up to your distances - impressive!

Beautiful! Great long ride. I definitely found that I could do 50+ miles last year, but anything over 50 and I was spent for the rest of the day!

Woohoo: 50 miles, you did it!
Congratulations!

It was indeed a beautiful day for a ride!

Congrats on your long ride through those beautiful places. Moreover, It Seems the weather was perfect. Wonderful pics of your country. I'd like to visit it.

The last quote is a perfect lesson to learn.
A great ride on a perfect day.
You make me want to ride my bike again only to take the picture as you do.