Was My Face Red! 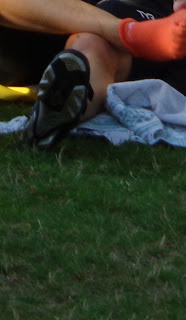 When I was a kid I used to read Highlights magazine. One of the features that fascinated me may have been called Was My Face Red or something similar. It was about kids who got in embarrassing situations.  I must have been storing up humiliating stories to lessen the feel of the ones I managed to get myself into in the future.

Those of you who have been following me for awhile know about the head gear on one early morning run.  That could have had this title.

But my most recent adventure has to do with the switched bike shoes.  I remember finishing the race and looking at the design inside the bike shoes near my bike and knowing that my shoes were plain black or something similar inside so these couldn't be mine.  When I got home I used them on my bike and they didn't clip in as nicely as my own shoes had and they hurt and they were too small.

I looked at the photos taken that day and the bottom was not the same.  I sent an email to the race director to see if he heard from the person who had taken my shoes.

Tuesday I took a bike ride and the shoes I had hurt and didn't click in well.  Today - Wednesday - my foot hurt all day.  So I decided I needed to get the shoes I had had before they got switched. I went to Burlington and basically chatted the sales guys ear off and told him all of the above. He got some new shoes for me and was putting the cleats on when I remembered the shoes I had now were in my car. (I had told him they were at home.) So I went out and got them, brought them in and they were the same shoes I had gotten out of my car.  What does that mean?  I had had my own shoes all along.

Why did my foot hurt? In fact it still hurts!  Why was it not clicking in as easily?  Why did the bottoms look different?  Perhaps the reverse placebo effect.  You expect it not to be okay and it is not.  I felt like a fool although the guy gave me some outs like I was concentrating on riding not what the shoe looked like and perhaps I had not straightened out the tongue. Truthfully my foot is killing me tonight. I am going to ride to school tomorrow and expect it to feel fine! But I hope my bike develops on problems because I am never going back to my favorite bike shop again. 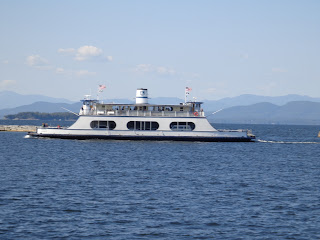 quick side notes
It wasn't a wasted trip to Burlington. I went for a run on the bike path at a beautiful time of day. Loved it!

Colleagues who read my facebook account of my race instantly stopped me in the hall to see my calf (the number) which was no longer there!  They were most fascinated by that.  Why do tris do that and running races not? Does anyone know?

I am still just a  wee bit giddy over how well I feel I did last weekend. I got wonderful calls from both my children!  Loved it.

I have yet another tri this coming weekend, probably the last for the year. As I am typing this I have a big smile on my face.  I do like triathlons.

And back to the bike shoes -- I may be embarrassed but I have around 100 dollars I didn't expect to still have!

Bahahahahah....that is hysterical. Especially since you sent me an email about it and everything :). Well, um, I could see me doing something like this so don't worry. The guy probably posted it on Twitter and FB and every other social media outlet out there....but, whatever!

That's hilarious! And awesome that you didn't have to buy new shoes.

Here's my embarrassing story for the week: for our fire exit, we go through a little-used door. Yesterday was our first fire drill of the year, and when we got to the door we couldn't get it open. Thinking how I'm this big string adventure racer I slammed my shoulder against the door: nothing. We turned and exited a different way.

Later I called the principal to let him know our door had been locked AGAIN. He shoved down the the handle, pushed agai at the door, and it popped open. Boy, did I feel brilliant.

I'm glad I'm not the only one who is...a little loopy sometimes :)
Regarding those cute bicycle tumblers, you can order them here: http://www.facebook.com/ButterHome/app_150178545006427

And, have you gone back to re-read the posts from early in your tri training? Such a big transformation from early season to now!

Well, don't be too hard on yourself - you still came in 2nd in your age group, shoes or no shoes!

Oops. But don't worry too much about it. We all hove moments like that. My favourite oops moment came from a client who'd come in to try on some bathers. She tried them on, ordered a pair then left. Only to be back in a minute saying she'd forgotten her bra. She looked around the change area then laughed at herself when she realised that she hadn't worn one that day.

That is very funny! But saving the money is great. I hope your foot is OK now. Another tri...? You are really inspiring!

Haha, look on the bright side, it gave you a funny story to blog about :-). Oh, and I could see me doing that too so don't feel bad.

Oh, that's a great story! Goes to show you how our minds create situations.

Ha, ha, that is too funny, and totally something that I would do. Thanks for a good laugh. And congrats on your rocking tri time. So awesome!!

Congrats on your race! And don't worry about your story. I do stupid things ALL the time!

What a nice story! Great to hear you didn't buy new shoes and saved the money :)
Congrats on your race!

Too funny! Glad someone didn't actually take your shoes!
I'm curious about the age thing too. I read through your comments but maybe nobody knows since nobody addressed it?! Maybe because they don't body mark at all for running races?