I think this was the last triathlon of the season for me which is very sad.  But my plan for the fall is to run some races and bike as much as I can. 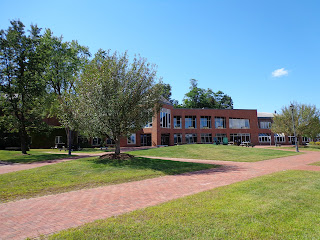 Walking around campus on Saturday.
This tri was the biggest one I have been in.  There were 204 individuals and several relay teams.  It was on Squam Lake in NH which is where On Golden Pond was filmed. (It's an old but good movie if you haven't seen it.)  I came to the tri with a friend from college as our old school was just 6 miles down the road. We spent Saturday walking around campus and visiting some old haunts.  I picked up my race stuff which was a good move as I was totally ready Sunday morning.
Much to my surprise on Sunday it was raining.  It wasn't in the forecast and it never rains this summer so I didn't even think about it. I did observe what other people did because of the rain so I would be better prepared another time.  In the end everything was quite wet and filthy but during the race itself I didn't care.

The way the waves were set up in this tri surprised me as they were by when you registered not age or gender.  This meant I was in the third wave out of 5 or 6  and many faster swimmers would be mowing me down in the lake!  It definitely made me nervous and I ended up doing a lot more breaststroke than free.  I didn't like being near a lot of people in the water although I did like that in the bike and run.  I ended up swimming in 12:28 - 400 yards which put me 161/204.  It was okay but I feel like I could have done better. 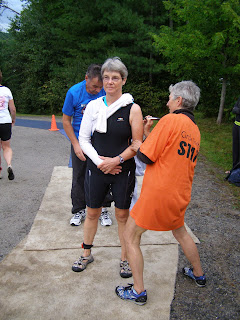 Getting marked - thinking about the swim 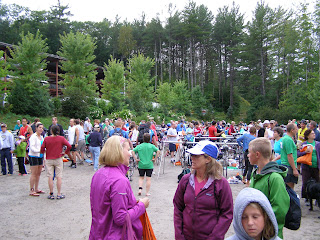 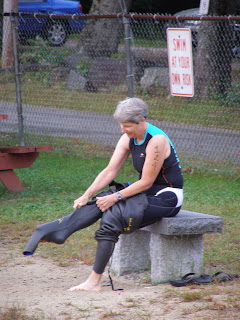 I manage to get it on yet again. 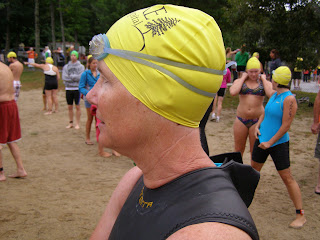 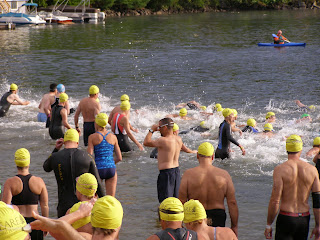 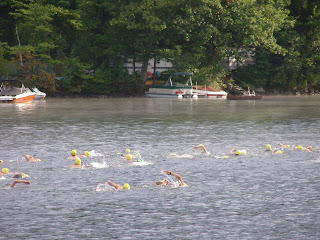 I'm out there somewhere.

I'm not used to all these other swimmers around me. Very glad to be done.
The transition included a run up the beach and road over many sharp hurting stones in bare feet.  I took a very long time in T1 again - 4:27. I don't have this down at all. 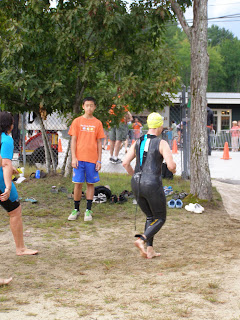 Then I headed out on the bike.  Before the swim the sun came out briefly but during the bike ride there was a downpour.  As I said I liked being around a lot of bikers.  The race described the bike as hilly and challenging and it was.  Because of the rain the  downhills were rather challenging too. There were some very sharp turns.  It was more the steepness of the hills than the number of them that made them hard for me. Some people walked and others traversed the hills which seemed very inefficient. I need to learn to stand as that is when people would get ahead of me.  There was lots of passing - both of me and by me.  I had one woman I tried to keep up with and it really helped.  The bike was 12 miles and it took me 52:19 which is about what it took me to ride 14 last weekend.  My place was 138/204. 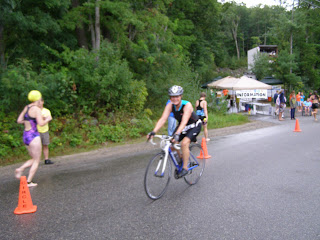 Happy to be headed out on the bike.  At this point
it isn't raining. 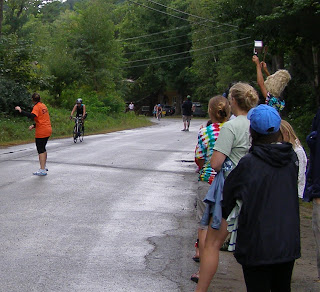 12 hilly miles later I'm back at transition.
The transition was okay.  I was glad to start running. It felt good right from the start without the usual tired dead legs.  When I reached the first mile I could see my pace wasn't much over 9 which was great. The run was only 2.7.  Again, there were more people around which really helps for picking up the pace.  Truthfully I feel more inspired to push and pass on the bike. When I run I seem to settle into a pace and work hard to keep it.  Even though it was rainy at times and wet there were people out cheering us on.  I was excited to hit the last half mile or so for running and see people coming in on the bike.  I certainly wasn't last.  I ended up doing the run in 25:19 for a pace of 9:25 which is my fastest tri pace.  My place was 129/204.  Happy! 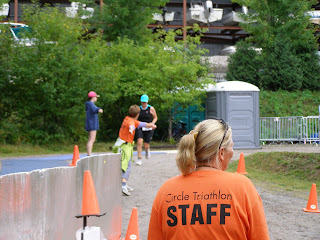 I'm headed out of transition and it's time to run. 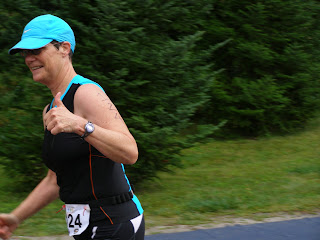 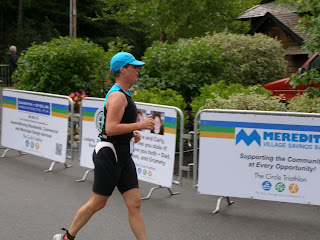 All done and coming in.
I was surprised but thrilled to get a medal at the end. There were also some cool water bottles. After I had mine I turned around and saw a little kid reach into the boat holding them, drink out of one, and put it back!  I waited for a bit for results but I was too cold and wet plus my friend had already put  in a good effort watching and I wanted her to want to do it again.  So we headed out - the car was very close because we got there early.  We had opted for late check out at the hotel which was the best thing ever as I was extremely cold and filthy. 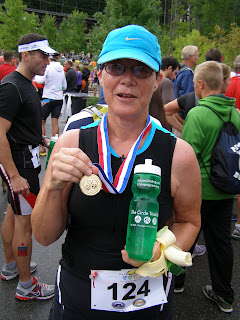 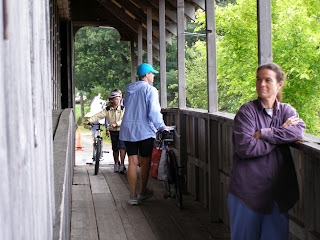 Leaving on the covered bridge we went through twice. 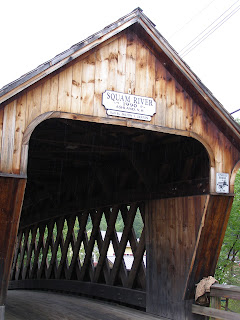 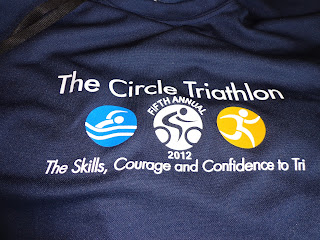 LOVE the shirt and the saying. 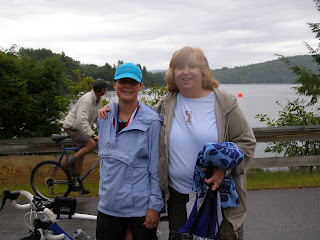 With my friend, Kay. 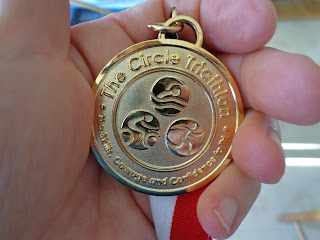 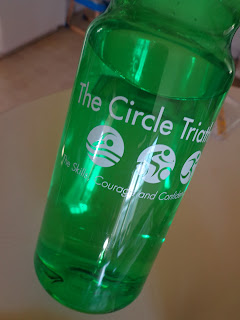 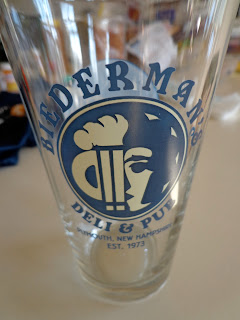 This souvenir is from the night before!  Visiting
an old haunt! There was a blue moon
special!  The owner was in my college
class. 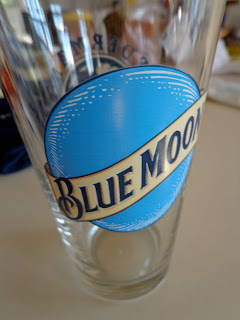 So I am feeling a little sad to have no other tri lined up but I have a feeling next summer will be rather full of them.  Because I am definitely hooked on this new love!
Posted by ajh at 6:57 PM

Awesome, simply awesome. Loved the body marking pic. I saw focused, nervous, yet confident. You did great too! Top half of your age group puts you comfortably in the middle of the pack (MOP). MOP is my goal. Sometimes I hit it, sometimes I don't.

Glad you found something challenging you enjoy.

You amaze me!! Congrats. You will be even better next summer. This weekend was the Lake George Tri. If you do it next year, I will watch!! Hope to seeing you running in the fall...hint. hint!

Woo-hoo, we are SO happy for you, you tri racing machine!!! Even though winter is on its way, you could find a tri in a warm climate in a few months??? That would be something fun to train and look forward to. We have a pint glass collection - we try to pick one up from all the special places we love!

3 tris, 2 AG placements. You simply rock!! I'm so happy for you that you've come to love triathlon so much, and I totally get the sadness that your tri season (may) be over. I like that warm-weather tri idea!

And I really loved your comparison of that ascend to a first marathon. That helps me reframe it in my mind to just be proud of getting to the top. Thanks!

You've really found YOUR sport haven't you?? It's so much fun to read these reports - I can feel your excitement.

I am very impressed that you cranked out 3 fantastic tris in a relatively short time this summer, hooray!!! Sucks that summer has to end (but I know how much you love winter)...you'll get stronger over the winter by riding and running and swimming so that when summer comes, you'll be cranking out tris every weekend :). Great job, girl - love all the pictures and your awesome medal!

So inspiring! Reading your post, it's hard to believe that you are a beginner at this sport! Well done on a fantastic achievement, I'm so impressed!

Congratulations!!! You have done just awesome this summer. Loved the pictures!

PS: On golden pond is one of my favorite movies, haven't thought of it in years...

It more than obvious that you have the triathlon bug! I aged up this year and I was able to place in both triathlons I did this year. A good friend of mine who is 68 told me that if I can manage to stay healthy and live long I will be able to place almost all the time! Haha!

Wow, awesome! You are really getting good at this! Well done on another tri finish. Your overall position is fantastic! Rest well!

so awesome! congratulations on another great day!

yeahh congrats!! I think if I could get over my nerves about all those flinging feet near my face when swimming I would sign up. Strange how they did the groups though I've not heard of that before.

Congrats!!! You are getting quite good at these!

congrats on the AG placing!! Woot!

A you've become a tri natural in such a short time! Well done and look at the AG swag as well. Very inspiring. I am coveting that pint glass!