Reuniting With an Old Friend 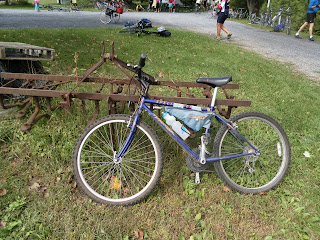 My old friend, my mountain bike

It was a wet wet weekend.  I still haven't done the ride I was looking forward to and I am resigning myself to the fact that it may not happen this year.  But once again I had a great alternate ride.  Saturday it was raining steadily so I ran hoping I might luck out on Sunday.  You certainly couldn't call it clear skies but I managed a 25+ mile ride without rain drops!  When I left my house I thought I would be riding 10- 15 miles tops.  I was riding my mountain bike for the first time this season and I had a blast on it.  I headed to one of my favorite dirt road routes and at some point I decided to do some exploring in my own town.  I went up several dirt roads (and I do mean up) knowing I would be turning around at some point.  One road I went farther than I had ever been on that road and was amazed at all the houses.  I turned around shortly after the school bus turn around as the road really started to narrow. It was quite isolated but not scary.  Except at one point I had a large gray pig (boar?) right next to the road.  He wasn't too thrilled with me and took off. When I came back that way he was back by the road and once again I startled him and he took off. It was one of MANY times today I thought I wish I had my camera.  Because it was supposed to be raining I left it at home. I was amazed at how pretty all the foliage was everywhere I rode in spite of the gray skies and no sun. 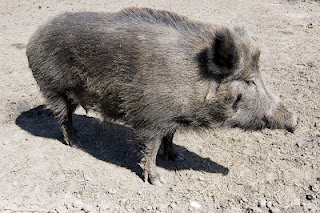 Not as big as the one I saw.  I was worrying about moose not
a large pig.

A second road that I went up was very hilly and I didn't go as far.  It never flattened out, there was nothing to see and I had no idea where it went other than up the mountain.  The next road was one  I have ridden to another town on although it is not a road that is maintained.  I went a good 2-3 miles up it and was once again surprised at all the houses and the lovely foliage. I turned around when it became National Forest Road.  It was great to be looking at completely different stuff in a beautiful setting. 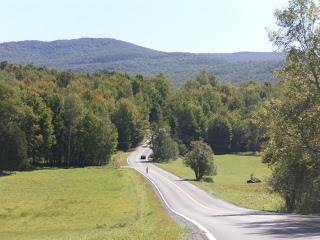 I decided I might want to hit 25 miles if I could and still needed to add some.  I found a loop to add on that repeated a little bit of my ride but then took me another way I don't usually choose because it is too short but for this it was perfect.

It still wasn't raining but for some reason my wrist was hurting (holding onto the bars a different way or angle?) and I headed for home.  I had been wearing my rain coat and rain pants and I didn't spring for the pricey Gore Tex stuff so I was drenched with sweat.

Since I didn't take pictures I went on line to find pictures people have posted of this fall's foliage. 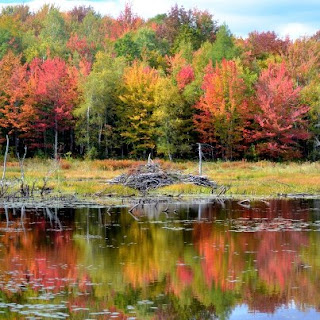 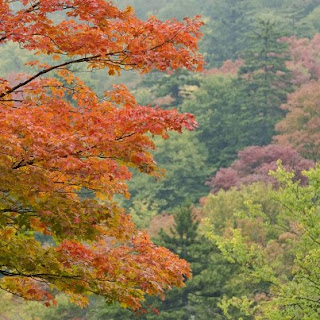 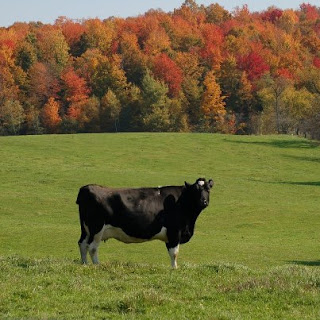 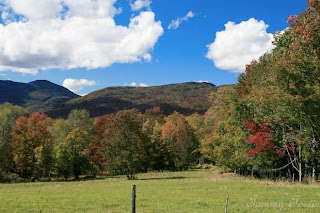 This picture and the one below look very much like
where I was riding today. 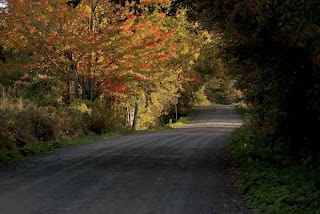 Thursday I had a great run mainly because I ran in a different place. (I had an appointment and was able to fit this in before it.) The sun was rising through the eerie fog surrounded by the fall foliage. But once again I didn't have my camera.  It was so nice to run in a different spot that I may run there again tomorrow.  I have packed both biking and running stuff and it depends on the weather as to what I do.

Last week continued to be somewhat stressful at work but Thursday I rode my bike on the bike path after work and what a great stress reliever that was. Plus I got to see my favorite son and dog!  Notice I mentioned the son first. 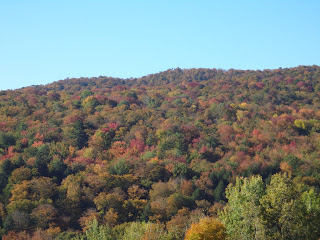 Foliage near my house earlier in the week 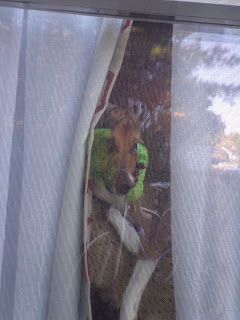 Jaxon sadly watching me leave for my bike ride 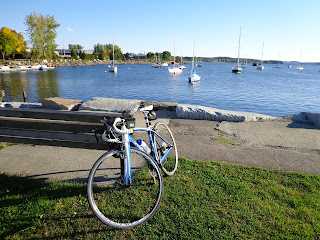 A gorgeous evening on the bike path 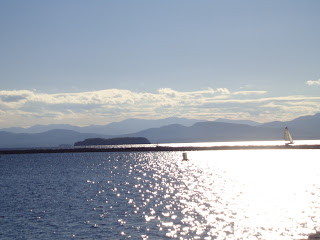 Beautiful fall colors; I'm so envious of that!

You may have mentioned your son first but I noticed that there's only a photo of his dog. I think we know where your loyalties lie.

The Autumn leaves are just amazing. The colours are spectacular.

Really beautiful pictures! Your ride today sounds great. I wish I spent more time exploring. Usually I put things off for too long and get too focused on doing just what I had planned and not having time for more.

Yea for good rides and runs! :)

Love the fall colors! Scary about the boar. At least he seemed more scared of you than you were of him.

That pic of Jax is hilarious! Glad you. Had a nice ride. Send some of that rain our way. We're dry and our fall colors are suffering for it. Need to get to VT for fall colors some day. A wild pig??

I don't mind seeing wild boars when I'm on a bike, but not when I'm running. They can be big here in Texas. Nice photos!

The colors are getting prettier :).

I've never seen a wild boar before - ever. I think it would have freaked me out some - ha!

It's funny - when I saw the title of your post on my feed, the first thing that popped into my mind was that the old friend was going to be a bike! LOL!

Gorgeous fall pictures and what a shocker that you ran into a wild boar not once but twice! Good thing you were up on a bike and not running - those guys can be agressive. We have a lot of them here in Belgium - I didn't realize there were some in Vermont, too!

Reunited and it feels so good! :) What a beautiful ride, not sure about that pig thing though ... ha ha.

I absolutely LOVE this time of year, not sure about the boar though! : )

your pictures are always amazing, but the fall ones? *sigh*

We had rain all day Sun :(
Love the colors this year and LOVE your last two pics!

Spectacular views. Nice ride. Sometimes we train so much we forget to go out an just enjoy the ride. I think cycling has gotten that way for me because I don't really enjoy it much. I need to get out on my bike and just enjoy myself.

What a great ride you had this weekend Andrea.


About the fawn and the fence: no it's not a zoo. The fawn and his brothers and sisters are in the middle of our village. You can feed them if you want too and they are not very shy either. That's why they are behind a fence because it's in my village.

What a beautiful fall picture (the fourth one) and nice place to run. With regards to that large pig, is it the same pig as we see in Asterix? :)

I guess you have to have the rain to create such beautiful countryside. I should be posting some great photos soon too considering the terrible weather we're getting!

Not sure what you mean regarding your question on my blog. Can you explain? When I click your name on your comment in my blog, it brings me to your blog.

I think I've seen Paula Poundstone on tv. We need to go to another comedy show...we used to do that more often.

We didn't actually go to an Ethiopian place. I can't imagine Jeff setting foot inside...the man complains if I do something "exotic" like put cranberries in the apple pie! Taste of St. Louis is like this great big fair where local restaurants set up tents and you can buy small portions of some of their signature meals. So he had some steak thing from a "regular" restaurant, and I went for the Ethiopian food. :)

I've got running races scheduled into December, and I've got an adventure race in Dec. as well. This year, I could do adventure races Jan, Feb, and March...not sure exactly which ones I'll be at, but I have plenty of options.

such beautiful scenery (even if they aren't your photos). the pig - cute! but i can see how it'd be a little frightening of a surprise :)

As usual the photos are wonderful. Beautiful fall colors.
My old friend is alone in the flat.
The wild boar ... an interesting meeting. Here there is a slaughter of wild boars, I cannot stand the hunters when show the poor killed animals on their cars.