I thought I had already done some windy rides in the islands this summer but Saturday's ride beat them all. It was the easily the windiest day I have ever ridden. We knew it was going to be windy but didn't expect the extreme winds to come so soon. When we started out it was windy but the difference between the beginning of the ride and the end was dramatic.  More than once I did wonder if we should continue but I used the teenage logic that my friends were riding still so it must be okay.  If I had been alone I may have headed back to the car sooner.

My husband had promised he would ride with me in my favorite islands. When I mentioned it to my riding friend, Cathy, she said she would get her husband to come also.  It wasn't a sunny day but the temperature was perfect. We parked farther away from our usual spot to add some miles. When you ride with Cathy you always add miles. I originally told my husband 25 then it changed to 35.  He doesn't ride much and I didn't want to do more than he wanted.  So off we went being treated to beautiful vistas right away. 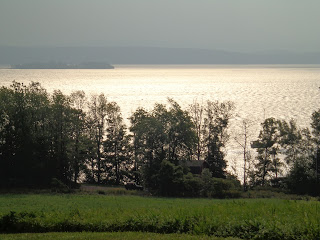 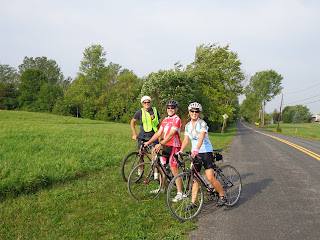 Fresh and eager to ride
Even in the beginning of the ride I was being careful with the crosswinds. It felt a bit like I could be swept off my bike.  So downhills weren't as fast as usual. The water had white caps and didn't look very friendly for small sailboats. 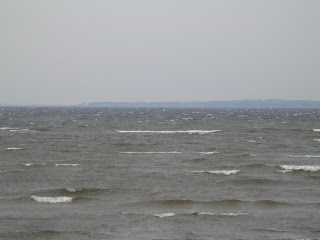 I never felt like we had a true tailwind but the beginning of the ride was certainly the easiest.  There weren't as many bikers as most Saturdays in the islands.  We also decided to cross the drawbridge and go into North Hero. Cathy thought we should go to the end and come back but I suggested a shorter ride out to investigate a peninsula we could see but one we had not ridden on. It was stunningly gorgeous but we couldn't go all the way to the end. We ended at  a local YWCA camp that was hosting a wedding.  (I cannot imagine what it was like there when the storms hit.  Poor people, I hope they headed inside.) 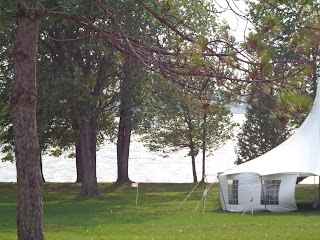 When we headed back toward South Hero it was pretty difficult going with the wind against us. We finally got to the road that took us to the West Shore Road but then we had to deal with the cross winds. It was wild. I took a picture of one of many flags we saw flapping in the wind. 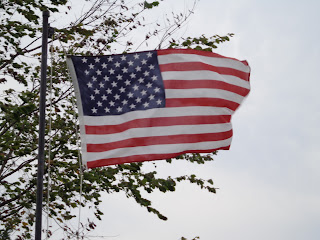 When we got to West Shore Road it felt a little more protected and less windy. I stopped to take this very Vermont looking shot. 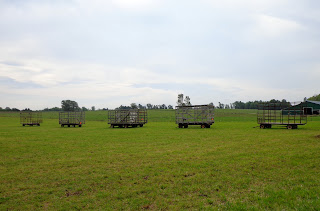 I was looking forward to our ferry ride to New York as I love it when the seas are rough!  It did not disappoint.  We tucked out bikes into a protected area and stayed there with them. I did some walking around but I didn't want to get soaked as we had a lot of riding left to do.  When we rode around the peninsula in New York we actually had a tail wind for awhile and it was glorious. Soon enough we were headed back into the wind but with some great entertainment. There were many many para sailing and sailboarders out. We stopped several times to watch them.  In one spot there were easily 50 cars parked on both sides of the road, the majority from Quebec. I assumed it might be some kind of sail boarding club. They looked thrilled with the conditions. 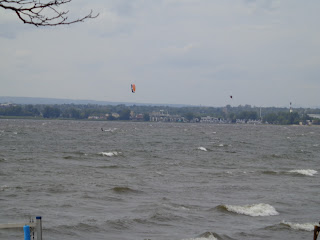 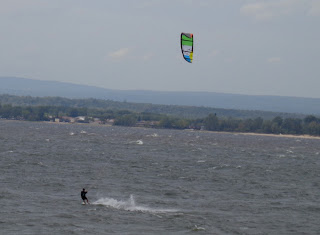 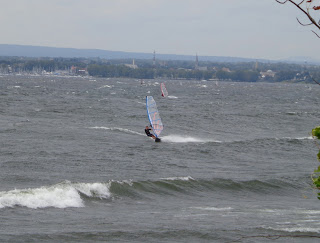 The lake was full of sail boarders. It looks hard! 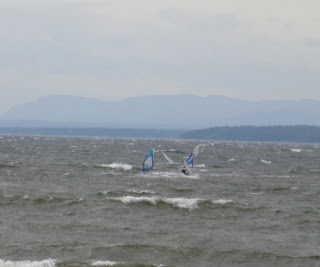 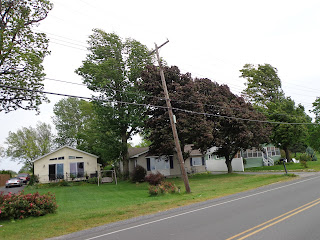 Trying to show the effects of the wind.
We got on the ferry to go back to Vermont and the way back was even more of a rocking and rolling ride. The skipper had us tuck our bikes out in the open next to cars rather than on the covered side.  We hooked them over the railing and went up top.  Two guys standing in the front of the ferry got drenched within seconds.  I have to say the ferry rides were one of my favorite parts of the day. We did watch a large sailboat that looked like it was in trouble but it righted itself and continued on. I was delighted with the ferry but would not have wanted to have been on a small boat. 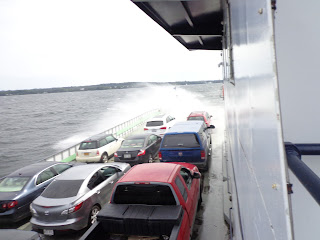 The water comes up over the deck. 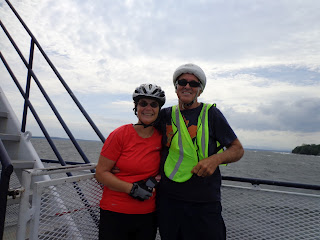 A great day with my husband! 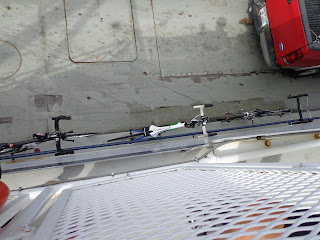 The bikes are hooked and safe
When we got off the ferry and were going across the island it was very pleasurable OR not as much wind.  We then had a trek straight into the wind back to the car. We had found out at the ferry that the winds were 25 - 30 mph with stronger gusts and expected to be at 40 mph soon.  It truly wasn't too bad until we reached the causeway to cross the lake back to our car.  All of us had separate thoughts that we might have to get off and walk the wind was so strong.  I unclipped for a ways as I thought if I was going down I didn't want to be clipped in. When I did get back to my car I had 45.8 miles done. Ordinarily I would spin around the parking lot to get that to 46 but I was done. Again - we all did the same thing - no finishing off those miles!  So overall it was  a very fun ride in spite of or even because of the wind. It was a great day to be out enjoying the elements and taking what Mother Nature was throwing at us and coming out ahead.  I did think as we were talking at our cars that we would not have set out in these winds had they been that bad at the beginning but none of us quit once  we were in it.
Later that day there were tornado warnings in the Islands - just like in many parts of the East.
Posted by ajh at 7:36 PM

Glad you guys were safe!
We were at the DC zoo yesterday (my first time!) and a storm rolled through with intense winds in the late afternoon. Luckily we were near the Ape House when the skies opened up!

Wow, a 25 mile ride turned into a windy 46! Hopefully your husband will go again next time.

Loved all the pictures.

Usually photos don't do justice to weather events but you can really see how windy it was in yours. I can't imagine how the bride from the wedding managed to keep her hair looking okay for photos in winds like that. You'd need some extra-special strong hold hair spray.

Wow, I thought MY ride was windy today, and yours CLEARLY was way way worse! We had a wind storm here in Thursday...huge gust of wind out of nowhere drove our bball hoop down on my husband's car's windshield. :( Glad you guys were able to push through all that. It's beautiful, but man that's tough riding. I know what you mean about worrying about being knocked over. I worry like that on my road bike bc it's so light...not so concerned on my 10-ton mountain bike. :)

Crazy weather you had. I was outdoors today and it was windy (though not as bad as you) and it reminded me when I ran a marathon in Tucson in gale-force winds. Not fun. Glad you made it through it all unscathed (for the most part ;)...just think how much stronger it made you!?!?!

The pictures are really cool...those are some strong white caps - I'm sure you're glad you weren't doing a tri in that stuff today! :)

So great that you turned it into a group ride. Glad you survived the winds, I struggle on the bike when there is a tailwind LOL I love that you post pics of your outings!

yipes. that was some serious wind! being on a boat in the wind = not my favorite thing. glad you were ok!

Wow. Riding in the wind is tough, and that looks like hard work. Are you aching today?!

I don't like riding on the ferry when it's not windy. You are brave!

How fun that you can hop on a ferry and go ride somewhere completely different like that! And that did look windy! I am not a fan of windy rides, but i suppose they make us stronger, right?

I'm no fan of the wind. I'm sure it's much worse on a bike than while running. Well done for toughing it out. Looks like you had an awesome time anyway.

Riding in harsh winds scare me - particularly the gusty cross winds - blech. Kudos for continuing and grabbing 46 miles, despite the weather - very impressive! And you like choppy ferry rides??? That confirms your Crazy Woman status! :-)

looks like a scenic ride, even if a 'little' windy! pat on the back to hubs for sticking it out with you :)

Sounds like a very windy ride indeed but how much fun to do this with your husband and another couple.

Nice post with beautiful photos! I'm sorry for the crazy weather you had.