Biking in the Islands Again

Another bike post!  I did run and swim this morning and they were decent workouts.  I'm beginning to like swimming again. For awhile in the pool it was not so much. It is less crowded although one guy just hung on the side and stared at everyone.  Strange.  Too early in the morning to get up and just stare.

But another day another great bike ride, this time back in the islands.  We hit 3 of the 5 towns in this island county.  We started in North Hero riding along the lake and decided to go down a dead end road to explore a state park.  It turned out to be the saddest ugliest state park which hardly seems possible in a spot this beautiful.  It is only a  day use park but I can't imagine anyone coming to it for any reason.  I was trying to explain what it was like to my husband but I don't think I can do it justice in a negative way. 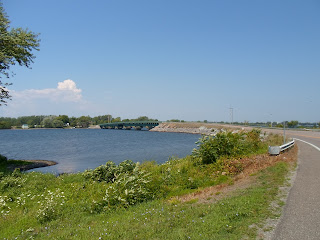 The bridge into and out of North Hero

We continued on and hit a fair amount of construction so we were happy to get out of it crossing the bridge into Alburgh which is where we probably put in the most miles. 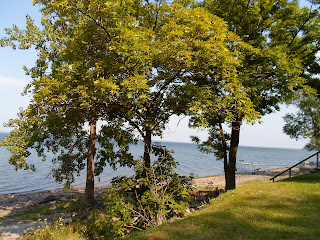 A beautiful spot for a snack and a rest
The first part of the ride was up route 2 which is the only main road that goes through all of the islands. There is a shoulder but there are lots of big  trucks. The biggest culprit to going too close to us was a demonic school bus! Each time I heard something big behind me I prayed it wasn't that school bus again. They didn't give us an inch.  So we were happy to get off RT 2  and head in the other direction on a less travelled road next to the lake. BUT when you were going in this direction it was very windy!  The beauty of our surroundings helped us with our struggle and made it all worthwhile. We stopped for a snack before we came to the causeway to Isle La Motte. 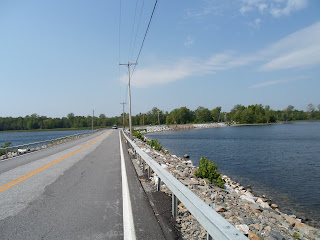 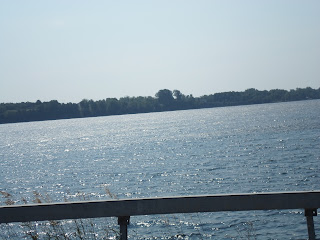 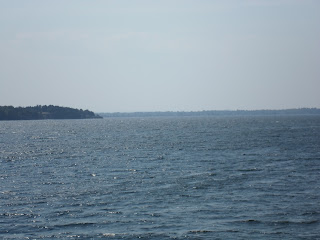 You don't go to Isle La Motte for any reason other than to go to Isle La Motte. The one causeway is the only way in and out and that is the only town there.  Our first part took us down the Main Road which could have been anywhere. When we got to the southern tip of the island and headed back up we had the wind at our backs and the lake by our sides.  Last summer I did a race here with my son and I think I said it was the prettiest race I had ever done. 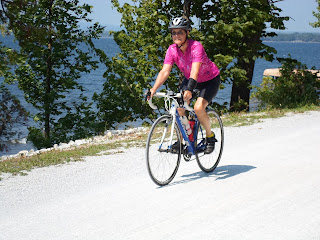 Need to document that I was here 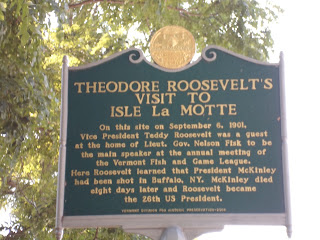 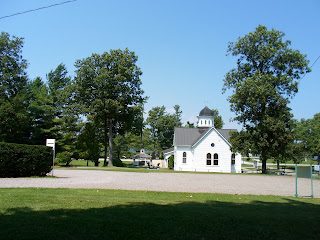 St. Anne's Shrine
We stopped at St. Anne's Shrine for very clean bathrooms.  There were people attending an outdoor mass.  After we left St. Anne's Shrine we went around the corner to quite a shock -- A HILL.  Just as I was thinking it Cathy muttered that she tried to put her bike on the lower sprocket and it was already there!  But soon enough we were going back across the causeway, along the lake - gorgeous - through Alburgh back to North Hero.  Our return trip was much faster although just as beautiful.  By the time the bikes were back at the car we had ridden 43 miles.  I.......was.........exhausted.  Today I was going to ride and decided to give my body a break.  The thought of riding was something to get done not something to  enjoy and that is not how I usually approach riding.
But since my first triathlon I have not rested so I felt not riding was a good thing to do.  I still ran and swam but those felt great.  I am currently in the airport waiting to go to DC so I was trying to squeeze some workouts in.  But one missed workout is not going to make a huge difference.  Can you tell I am convincing myself?
Next time I post you may see some pictures looking like these! 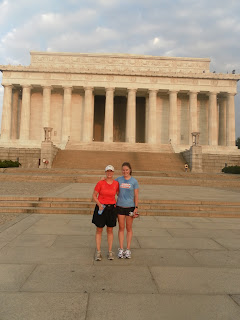 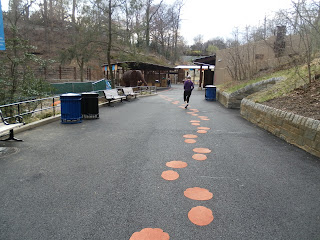 Love the photo of you biking. Have fun in DC.

I just love all your pictures. It is like a little article out of a travel book/magazine.

I just love all your pictures. It is like a little article out of a travel book/magazine.

Gorgeous pictures, as always. Love all the water - something so foreign to me here in Colorado so they are always great to see on your blog!!

Have a blast in DC, I know how excited you must be to see Emily :). I'm sitting here on my bed with Abbey watching the Olympics...I think about the day she moves far away and we can't do this routinely, but for now, I'll eat it up :). Have fun!

Welcome to DC!! Try not to melt in this heat. It has calmed down a bit but it is still hot/humid!

Another great ride with beautiful photos, thanks! Yes, convince yourself...:) Have a good DC trip!

Have fun with Emily. And if you find any amazing cupcake idea take a picture for me :-)