Getting Out of My Comfort Zone - In a Different Way 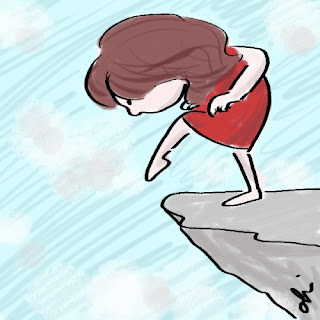 Being fit and supporting others in healthy choices has caused me to go out of my comfort zone.  Yes, swimming and entering triathlons got me out of the old comfort zone but less obvious things also sent me to that place I don't necessarily want to go. 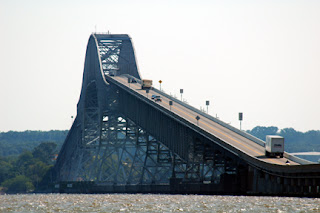 What did I do that was so uncomfortable?  See the picture of the bridge above. I drove over it.  So what you might ask.  Well I don't particularly like driving over bridges and look at the rise on this one!  It was after Emily's ultra marathon and she wanted me to drive part way home.  I wanted to say, "Well, I know you just ran 32 miles in the heat and humidity and I only sat in the shade and watched but why should I drive?  The plan was that you would."  But I couldn't quite utter those words so soon enough I found myself driving over this bridge and up the interstate through Maryland.  But I hadn't lost my mind so before we reached DC, a major city, a place I just don't drive, I did pull over and exchange spots with Emily. 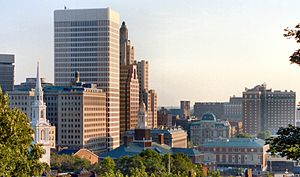 Any city with a skyline must have terrible traffic, right?
Then this past weekend, I drove on a very busy highway and into the third biggest city in New England to run a race.  Now my cousin has lived in the same spot for years and I have never visited her because it could entail driving through Boston.  But in a weak moment I signed up for this half in Providence, sure I could get someone to go with me who would probably drive.  Well, that didn't happen and I could see I was going to have to drive. I AGONIZED over how to do this.  It came down to driving on 495 which sounded like it would be full of trucks and speedy cars all trying to intimidate the woman driver from Vermont.  Then I would have to drive into Providence not once but twice and of course that also means I would be driving out of Providence twice.  I googled Providence driving where  I didn't find out much. I googled images of bridges for Providence and there certainly seemed to be a lot of them. I tried to figure out train schedules to see if that would work.  I worked myself up into quite a frenzy. 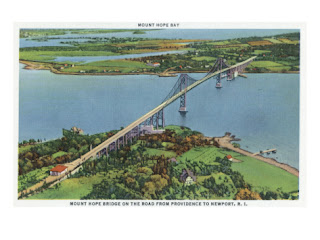 One of the many bridges that calls Providence home.
Then I had to calm down. It just wasn't healthy. I was going.  I wanted to see my cousin. If I got there and didn't want to go into Providence so be it.  If I drove in on Saturday to get my race packet and was never setting foot to the pedal on the way into Providence again, I would have my race shirt and a visit with my cousin accomplished.
So Saturday came and off I went with my map quest directions, emailed directions from a friend and my GPS. I am a one hand on the wheel, sipping a cup of coffee driver. But once I reached 495, I had my hands gripped tightly on the wheel at 10:00 and 2:00.   My driver's ed teacher would be so proud.  Yes, it was crowded. Yes there were lots of trucks.  Yes, 65 seemed to be the slow speed.  But I got in the middle lane and stayed there going 65. I refused to be made to think I needed to go faster.  But I didn't even think of answering the phone, sipping coffee or gawking around to see what license plates I could see. I was on this road for 60 minutes but once farther south it did get better.  When I got off the highway even though I was close to my cousin's I pulled into a DD to use the bathroom!  Whew.  I was done the first big section.
I got to my cousins but I barely had time to say hi before off we went for Providence.  Now having someone  else in the car lessens the anxiety considerably!  I did find out that even though she lives about 20 minutes away she never drives into Providence (or Boston). Could my problem be genetic?  Well, I don't know if it was because it was Saturday but the whole driving into Providence thing could not have been easier!  I did make a wrong turn but Mrs. LuLu Garmin, one of my very best friends,  recalculated and we had one of about 1000 conversations over the weekend and things were soon fine.  Time to leave the city, no problem there either.  Same with the SOLO trip back the next day.  Then back onto 495 and before I knew it I was back in friendly not so populated NH and I could have one hand on the wheel again.
So it may seem like nothing to many of you but believe me, once again for my love of fitness and racing, I ventured Way Way out of my comfort zone.  Will I try again?  Perhaps but small steps. I won't be going to a race in Boston anytime soon or driving down to see my daughter. Airplanes were invented for people like me.  But who knows how this fitness journey will take me out of my comfort zone next time? 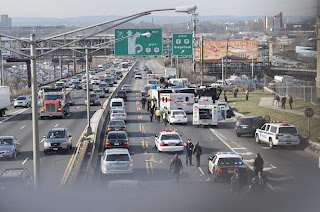 495 much too busy a road for this Vermont lady
What has taken you out of your comfort zone?
Posted by ajh at 7:42 PM

Well done A! I totally get how traffic/driving in strange/busy places can be stressful. I was proud of myself for navigating the Boston transit system from the airport and making it to my hotel all by myself.

I know very much what you mean. I'm not a big fan of driving myself places, as most any of my racing fans I've wangled a ride with could attest, but I've done more and more of it to do the things I want to.

Good job not letting fear keep you from doing the things you want to do! (From a person who just blogged on a very similar theme)

And that first bridge looked SCARY.

I'm glad I'm not the only one who doesn't like driving. I don't mind driving to places I'm used to but new places or long distances are another matter. You're a good Mum for sucking it up for Emily. But Motherhood frequently pushes us into areas we're not comfortable with.

Good for you! I totally get the driving thing - it took me years to get used to driving around here...and it still makes me nervous!

That bridge in MD/VA is crazy looking! I've certainly never been there before.
I've lived in the DC area for 9 years and worked in downtown DC for 8 and I've never driven here. I did wish I was driving once when my parents came down for a National's game and we had to pick up something at one of my coworker's houses and then cut across town. I am more familiar with the city than my dad (since I work and run here) and we ended up making a few wrong turns because I couldn't speak fast enough to let my dad know where to go. With the public transportation here there is usually no real need for me to drive here!

I love bridges but I am a little skittish when I have to drive over them. I hate it when I have to stop on them waiting for traffic to clear. Something about worrying it may snap and my vehicle will fall into the water. Ugh! I don't like heights. I don't even like walking on the jetty, levee or anything like that either.

I had to drive through LA's multi-lanes highway. That was something. It is always difficult to drive in an unfamiliar place with traffic. It gets too distracting.
But having a passenger does help. My best friend helped navigate and made sure traffic was clear on her side when I have to make turns or change lanes.

Nice job conquering that fear! I used to have to drive all over NYC and the 5 boroughs for work, definitely not fun at times!

I'm SO with you. I hate driving in traffic, will do anything to avoid it. Good for you for venturing out of your comfort zone!

Ooh, I love bridges, but well done for conquering your fears! These days I often find myself confronting a difficult task by thinking 'you have run a marathon - you can do anything'!