My Daughter, the Ultra Marathon Winner 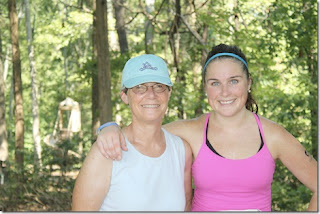 I was lucky to be in DC (Virginia) for this race! 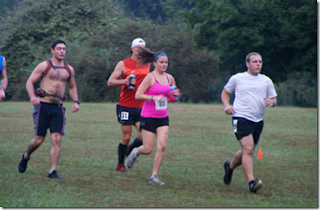 It was a quick start and I had to hurry to get out of the way.
It can be as much fun to watch your child compete as it is to compete yourself.  I was fortunate enough to be visiting DC when Emily ran her second ultra marathon.  It actually took place in King's Court, Virginia. I don't know the geography of this area very well but it seemed strange to drive most of the way through Maryland to get there.  The race was in a rural area on rail trails and turned out to be  a distance of 31.9 miles.  It was extremely hot and humid so thank goodness the race started at 6:30.  It started quickly and it was time to go to the first aid station. It was actually an aid station with no aid unless someone brought it for you. There were about 6 of us that tromped through the woods to bring our runners some aid although none of them wanted it at Mile 8.9. 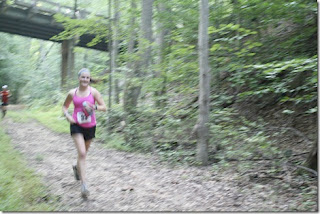 It was easy to see your runner coming from a decent distance.
The other spectators were very helpful and friendly.  It turned out that one of the racers and his wife who watched with me share the same alma matter as I.  They live in North Carolina but knew a lot about Vermont which is unusual.  When Emily went past she was the second woman but not by a lot. 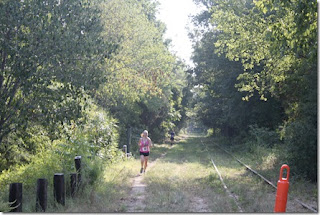 Emily's bright pink top was easy to spot from far away.
Good choice from a spectator's perspective. 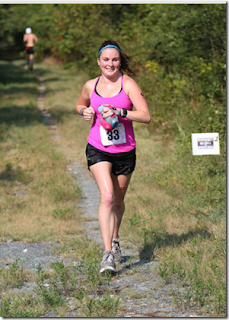 I thought she'd stop and regroup but it was a quick grab and off she went.

The next aid station was at mile 19.9 and was quite a drive away, not at all an as the crow flies route.  I followed two other cars to the spot which was a bit tricky as it turned out they drive much faster than I do.  But we made it and I got there in time to see Emily come through it looking strong as the FIRST WOMAN!  She grabbed a Cliff shot and headed out with barely a pause. Would she be able to hold that lead in the heat?  I didn't stay to see when the next woman came in as I was worried about getting back to the end in time.  It seemed like we could but some people had missed their runners at this spot and I didn't want to miss the finish.  Turned out we had plenty of time so once back we found some shade and began our wait.  The winner came in 15 minutes before the next runner. Wow!  There were no fights for the finish line as the early racers came in one at a time on what looked to me like a hot, hard hill to finish on but we could see them coming and there was plenty of time to get ready for pictures. 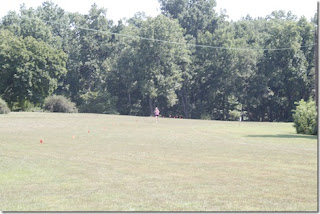 Once again you could see your racer coming from a distance,
especially if they were wearing a pink top and had a pony tail
swinging behind them. 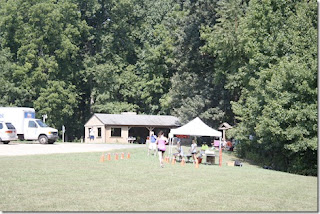 I don't need to quit my day job to become a photographer but
I gave it a try. 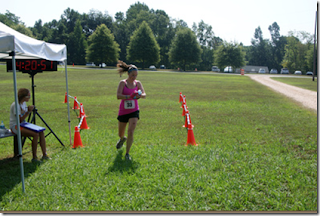 Actually there is a small story within this. Another woman came by first as the third racer. The other women watching with me said what I was thinking which is that there was no way she was the first woman. We had not seen her go through either of the aid stations ahead of any of the people she was now way ahead of.  They said I had to find out about it as they were very indignant on Emily's behalf if she was still the first runner.  It turned out she had turned around and finished without doing the whole thing - the race director was completely aware of this so no worries!

Emily was amazing!  Not only was she the first woman, she had set a new course record.  Each of these brought a very sweet cash award!  She was very excited and thrilled with her victory and accomplishment. She kept telling me her running hadn't been going well but man it did this day.  The rest of the day she was starving and working to fill that void. We made our way back to DC and Emily glowed - not just from the heat all day.  Her time was 4:20.  The previous course record was 4:24.  It is the first race she has won and I'm so glad I was here to see it! 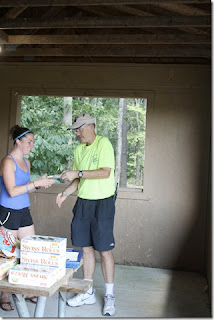 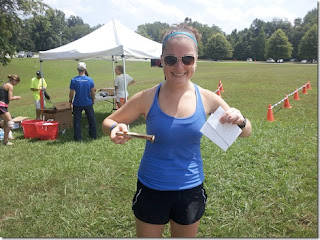 I loved the nail - rather unique.  I'm sure Emily loved
what was in the envelopes the best!
Posted by ajh at 9:55 PM

So cool to see your kids succeed at something they love! Emily is pretty amazing!

Awesome! You guys should take a trip out here and run some ultras..the west is the mecca for 'em

Well done Emily. That's fantastic. She's having a terrific year with her running.

Wow! How exciting - that's quite an accomplishment! And even better you got to be there to celebrate with her.

That is so awesome that you and your daughter share a passion for running.

You must be so proud of her and her performance at this race.

Emily is incredible! I can't imagine running that far and that hard in that heat and humidity. Glad someone can still succeed in this weather.
I had to google the town to see where in VA you were. I then had to google the race because you were in King George (I've never heard of it either).
I believe that 'nail' is a railroad spike, which is fitting since the race was on rail trails (my dad just retired from a railroad job so I know all about trains).

She is an awesome runner. Must have gotten those genes from her mother... I see she is going for a 50 miler next.

Congrats to Emily! I bet it was a blast to be there watching her! :)

Incredible that she broke the course record. I read her blog, and Emily's running seems to be going from strength to strength recently.

exciting!! congrats to emily. so amazing when you remember how she kept breaking bones too! ;)

Wow! Go Emily! What a stellar effort! I'm always so shocked when people try to cheat - I just don't understand the point.