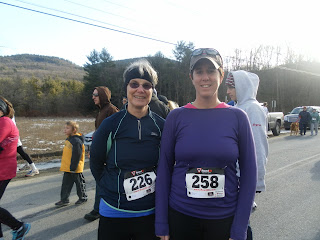 Before the race - warm, no snow or ice - very different
weather this year
The race on Saurday was much warmer than it has ever been in the five years I have been doing this race.  It wasn't bad at all waiting at the start.  Once we started though and were going up the first hill I felt like my legs were encased in cement. Was I even moving forward?  I couldn't imagine what my time would be.  But when I got to Mile 1 the volunteer shouted out 9:15 and I realized I was doing fine.  My second mile was my fastest at 8:57. The third and fourth mile have a long hill before you hit a downhill and then home stretch.  Those two miles were 9:39 and then 9:00 flat.  The last part is long, it takes awhile to go through the finish.  One guy who kept swapping places with me did pass me before the finish.  My final time was 36:31 which was about 15 seconds faster than last year!  My pace was 9:08.  I was 132/234 not quite in the top half.  I was 2 out of 5 in my age group, my fifth year in a row of getting an age group prize! Plus it was fun to go to the race with a friend and Christa was there.

But the prize.....the same prize the race winners got was this hideous lovely scraper! After I came home I checked back to see what the prizes have been over the years.  The first year I won a nice plaque, engraved as an age group prize.  The second year was an engraved medal.  The third year was a snowflake pin.  Last year was a bowl.  This year.......the scraper.   Let's go in the other directions guys and start improving the awards! 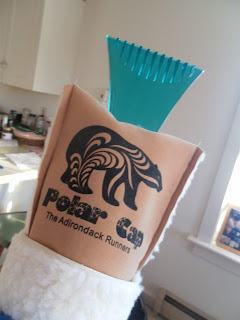 I shouldn't have shared this.....you'll all
be flocking to this race in the future and
no more AG awards for me!
So Karen, yes to the AG Prize, no to the hardware.


have a great race! Hope you come home with some AG winning hardware :) 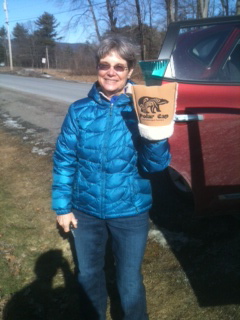 After the race Sara and I did a little shopping.  First to Target which we have none of in Vermont. I didn't buy anything terribly exciting but got a few things I needed.  Then a stop at Eddie Bauer where I only got one shirt. 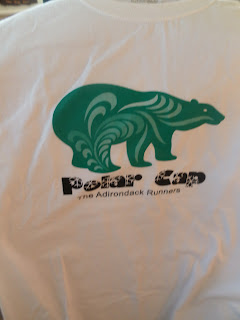 The shirt - I like the Polar Bear much
better on the shirt than the scraper.
Today's 12 mile run was much better than last week's 11 mile run because I made myself eat something.  It was colder than I would have liked it to be.  It's not too bad when you are out there but I am chilled forever when I get home.
We took a couple of pictures. One is taken on the road that my header picture was taken on. I wanted to show you the difference in the snow.  There is snow in this year's picture but there is not much at all.  Yesterday when I drove to New York once I left the town I teach in there wasn't even a ground covering anywhere!  The other picture just has our lovely mountain in the background. 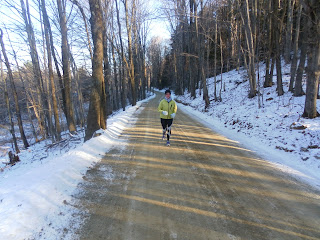 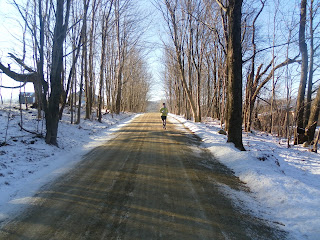 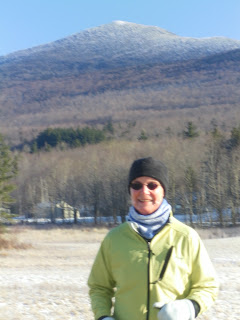 Great job on the run! Congrats on placing!

OK,it may not be pretty, but I bet it keeps your hand warm when you clean the windows on a cold morning. I'd totally use something like that!

Scraper, that does seem a bit lame, not that I've ever won anything =).

Wow no target in the entire state, that's pretty crazy.

Ice scraper swag....hmmmm....next year will be a shaker of salt for de-icing.

Ice scraper swag....hmmmm....next year will be a shaker of salt for de-icing.

It's nice to know what exactly your trophy was - I had no idea.

Good job on the race - hmmmm for the scraper... That is a weird prize!
As for the Passage, I know what you mean, but I stuck it out because I had to find out what happened. It does get more exciting towards the end... Plus it is supposed to be a trilogy.

Can't believe your weather is so mild this year while ours is so cold!

Congrats on the win. The ice scraper is kinda cool...at least it's different and useful! No Target's - seriously??? Wow you live a hard live :)

The ice scraper is hilarious! Congrats on a great race--bit time off from last year! And I like the way you unwind from a race. ; )

Congrats on a great race result Andrea. I get some stupid race awards sometimes too. Last thing I got was a pen with on the other hand a bottle opener.

I don't think it happened before that I got more snow than you during Winter. Still snow here because it's too cold to melt.

I miss the race not the scraper.

well, at least you continued your AG winning streak for the race....and can think of it every time you scrape ice off your windows. :)

At least it's useful. I'd rather get a cup, bowl, or I've scraper than a plastic "gold" trophy. I am concerned for what this race will give out next year! :)

Congrats on your race!

Nice job meeting your pace goal and the AG award!
I have a scraper similar to that. I actually had to use it this morning.

Congrats on a great race! That is definitely a very interesting award! I love the tshirt. The design is very cool!

That might be the funniest AG award ever. Congrats on a great race!

That is some interesting AG swag! Congrats on a great race! No Tarjay? Say is isn't so! I do love me some Eddie Bauer though.

Hope your foot feels better! Have a great swim tonight. Love your award...priceless.

Must....have....that....ice...scraper......
Haha! You must admit that is a pretty creative and different idea for a race prize. Congrats on your AG placing!

Looks like your swimming is going pretty well! Good to read. I saw your post on buying a wetsuit. I bought one because of bouncy issues as well. I needed all the help I could get and I thought it was worth the price! Yes, it took a little time getting the darn thing off after the swim portion, but that was a small price to pay for me NOT drowning. LOL.

Congrats on your age group placing! I must say that is some interesting prize. I think I'm with you on that one.

Congrats!!! And it figures that there is no ice to scrape, this winter has been so bizarre!!!

I'm with ya on the prizes... Need to start improving them.

That shirt is really nice!

Congratulations!!! Great job on beating last year's time. The scraper...useful, I'm sure, but I hear ya...a medal would be nice! Reminds me of when we got a bucket and spade for placing in the River2Sea relay.

On the podium again: congrats!
Also that 132 of 234 is good.
Beautiful place to run through and at last I know what a workout in the snow is.

Congrats on your AG place and a great race. An ice scrapper? Hmmm. Maybe they were trying to be creative?!?