Half at the Hamptons Race Report

This race was not everything I hoped it would be.  I didn't meet most of my goals.  I spent some time feeling badly but knew I had posted this not too long ago: 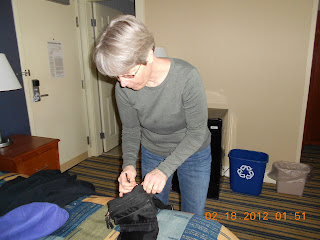 Arriving at the hotel on Saturday.  Why put this in?
Because I think I look thinner in it than I have in awhile.
I can't resist.

‎"I made a pact with myself to never complain about an event I've successfully finished. No matter what my finish time or pace, I will cross the line with a pocket full of gratitude. Records are meant to be broken, but those moments are far and few between. Every adventure offers an opportunity to evolve, explore, and celebrate life. And that is the gift that keeps on giving." Jenny Hadfield


So I didn't allow too much disappointment to seep through. I'll do a recap of sorts with both the goods and the bads.


*****Top Billing****** goes to the weather!! It was fantastic. It was sunny and clear and not too cold. I wore pants but could have worn capris for sure. I had a short sleeved shirt under a fairly light sweatshirt. I wore a headband and light gloves.  I was very comfortable. 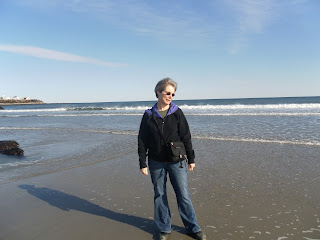 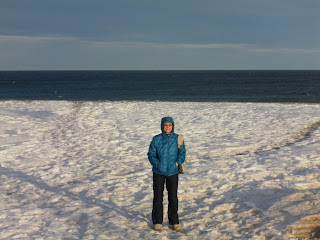 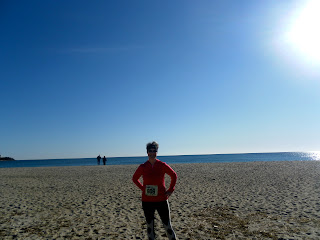 Shortly before the race start

The good - I had a great first half of the race. I really appreciated my fellow racers, the scenery, I kept my pace going up the hills and I was enjoying myself immensely. 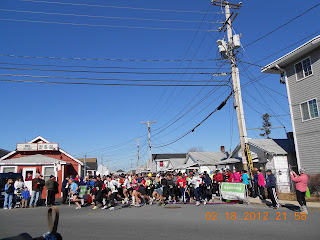 The race start- a fair number of shorts 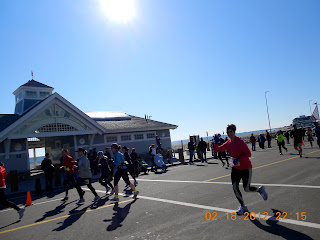 This year this is about mile 2.

The good - My foot felt fine in spite of the bruise on the top. I had not trouble with it whatsoever.

The good and the bad - The course had changed some.  The beginning was fine although nothing special.  We ran around the block at Hampton Beach and ended up going back along the beach front past the usual beginning. We ran past where I rented a cottage one summer with several college friends. The cottage has long since been torn down.  Then we went along the beach until we turned towards the neighborhoods. This part was much longer than usual and okay but nothing special.  It was a bit hillier and it was longer before we were back on the ocean for  a shorter time. I have always loved the last few miles as they were the most scenic and slightly downhill.  The most scenic part was cut out.  But there were certainly parts along the ocean which were quite nice. 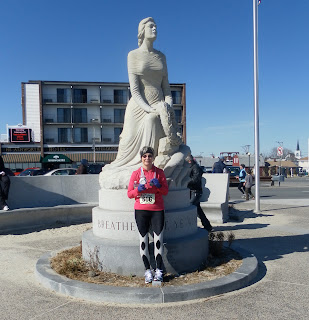 After the race wearing my medal

The good - Fellow Racers - I loved looking at jackets of my fellow racers that I coveted, reading race shirts, signs on lawns etc. One woman came up to me after and thanked me for pacing here.  I always appreciate that. 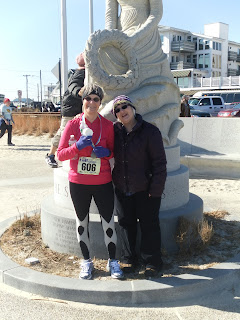 With my friend, H

The good - The race was very well organized, no doubt ever about what way to go, lots of race support for volunteers.

The good/bad - The shirt and medal are fine although pretty much like last year.  We did a little outlet shopping after and I got a new jacket and shirt at Columbia. I love that store!

The bad - I had some intestinal distress during the race which I do not typically have.  It continued after for a bit although all is fine now. I had a fantastic dinner of clam chowder, lobster roll and chocolate cake. 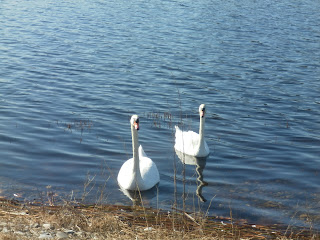 Swans on the way to Maine 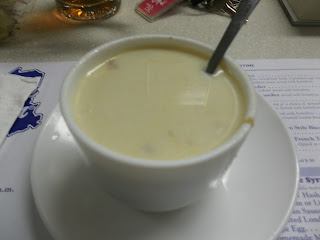 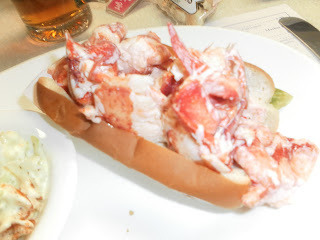 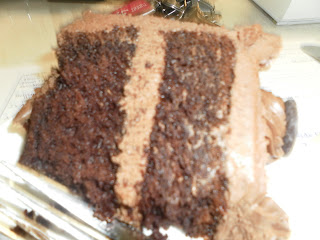 The great - We are now in Maine and I am going to run tomorrow - I know I should take a day off but I will go easy. I am not in Maine that often and I can't wait to run on the ocean and go to my lighthouse and all of that.

It sounds like the good outweighed the bad. Well done. Your photos are great - it looks like glorious weather.

Now off to get a Whoopie?

love the quote at the beginning of a post. I *always* want to apologize for my "lack of speed" at a race.

Last year (during a 6 day mtn bike race) on day 2 a gentleman congratulated me on my AG win (there were only 2 of us racing in the 50+ AG). I said "thank you" and want thinking about commenting how slow I was...then he said "you passed me 10 miles from the finish and it looked like you were riding strong". Whoa...glad I didn't mention how slow I thought I was!

That was a BIG lesson learned. If I don't hit the pace I would like and am disappointed - I make it a point NOT to mention how slow I think I am to other people. I might think I'm slow and others might think I'm slow but there is almost someone out there that thinks I'm fast. Glad that woman came up to you and thanked you for pacing her.

the GREAT looks really great - thanks for the pictures! :)

Good for you for not beating yourself up. You gave it your all and that's all anyone can hope for. Yay for mild Maine weather! Glad you enjoyed it.

You do look fabulous! I want your lobster roll!

Such great weather compared to last year (I think we have your last year's weather - bleh!). Nice job on the race...I'm glad you have such a positive attitude about racing...each race is a gift that we GET To run it, for that we have to be thankful, right? :)

Um...drooling over that cake - yum!

Congratulations on a race well run and in the bag! I love the quote. We are often so hard on ourselves, we forget the journey and how far we've come. It sounds like a beautiful course and a wonderful trip. Enjoy your run!

Overall, looks like a good race & certainly good weather. That lobster roll is now on my list of "must try."

I'd say the goods outweigh the bads! :) You look stellar!

Beautiful new header!
I am sorry for the intestinal distress, it is a problem when appears during long distance races, but you did great.
Nice pics and a beautiful place to race.

Great pictures, the weather does look perfect. I love the way you have focused on the positives. You said you hadn't trained specifically for this race, so I think you ran a pretty good race. Well done!

The overall balance sounds positive! I agree with the quote and the commenter above - we should simply be grateful we are able to get out there and do this sport we love so much, and not be down on ourselves for being "slow". Glad the weather was so beautiful for you!

Andrea I think you did fantastic at this race. Don't be too hard on yourself, you did great.

The weather looks perfect for running and the scenery is beautiful.

Congratulations! I can't remember when I last ran a 2:11:33 half. Well done! Love that first "looking thinner" pic! Sounds like an awesome race and I'm sure you'll be back. Rest well!

It was an AMAZING day wasn't it? I just soaked up the sun and had the most enjoyable (if not fastest) half that I've ever had. (finished in 1:48:31, not too shabby!)
Congrats on your finish- it really sounds like you ran a solid race (and with the weather- and the super fun other runners, and kickass after party, what could go wrong?)

Clam chowder after stomach distress? You are tough. AND your overall pace was under 10:00 which counts as a victory!

I think I posted that quote too. It's great to be racing. And yes if there's ocean view you have to run.

You ARE looking fabulous! We all love those thin pics of ourselves. Put them on the blog whenever we can! LOL. Ok, so your day didn't go like you hoped - you're the kind of person who will regroup and come back and smash the next one - I know you will. I'm GLAD you soothed your post race sorrows by doing a bit of shopping. And, no pics of the goods??? :-) The post race meal looks SO delicious - especially that chocolate cake! Yum!!!

I promise if I ever get to run/race again I will never complain!!! Glad you had nice weather this year and congrats!

Let's see you are griping because:

You GOT TO RACE>

you have a photo where you look really thin.

The weather was amazing

The ocean was super blue

You GOT TO RACE.

You raced mid-pack in your age group even though you haven't been running that much.

You GOT TO RACE.

More good than bad, right? And then that sinful dinner. Yum!
Talk about the difference in weather from the year before. (Global warming? :))) )
Oh, and your attitude - love it!
Now send some of that lobster my way.

You look awesome! Congrats on the race..take the good and learn from the not so good.

Well it certainly seems there is much more good than bad! What a BEAUTIFUL day to be racing and taking in those views. Congratulations!

Mmmm the cake must have made it all worthwhile!

I'm going to agree with several others and say that it seems like the good outweighed the bad ... but I def know what its like to have an "off" race day. Congrats on finishing. The weather looked amazing! I think cake should be mandatory after every race. I might start this after my next race :)

Sounds like it was still a pretty decent race. And I'm coveting your lobster roll. Love those!