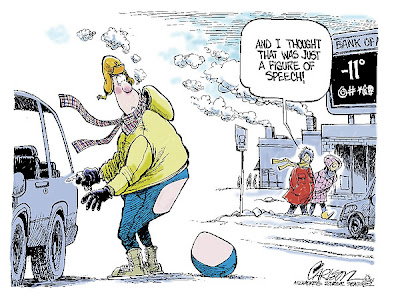 It's a snow day - here and around half of the country!  It will surprise some of you that I went to the gym today seeing as how I love running in blizzards!  But it fit into the way my day was unfolding. I had an appt. at 6 tonight that was messing with other plans.  So when I heard we had a snow day I called to see if there were cancellations - well yeah - not everyone is willing to drive in this stuff. I was going for my yearly mammogram and hated to miss it. I am superstitious that if I change it something bad will happen.  I could have had my pick of anytime as EVERYONE cancelled.  Well, at least she offered me many times when I called and when I was there I was the only one.  But I am getting ahead of myself.

I couldn't sleep this morning so I got up and went to the gym before my appointment.  I don't do dark running especially when there is a blizzard raging.  So off I went for my third visit this week to the gym.  They have actually all been good.  Yesterday was a speed workout and I did great!  It is my least favorite workout so I love it when it goes well.  Today I was the only person there, it was like  it was my own personal gym. I did ponder cross country skiing once I got home but I felt chilled and threw that thought away.

Once I headed out for my appt. the roads were not so great.  I went up one hill that had a car stopped dead right in the middle of it.  I just went around and my old but trusty car went right on up it.  The problem was also the zero visibility.  It was incredibly bad.  Right now it is hardly snowing.  Jeeze I want this to be the big dump it is supposed to be!

I have to say when I was running on the treadmill today I was feeling pretty good about myself.  I have been exercising for a fair number of years now and I don't allow myself excuses to not workout. I find ways to  fit it into busy schedules.  This week (well until this snow day) was just jam packed with can't miss it stuff.  But I had figured out how to get my work outs in.  There are many many days after work that I would so much rather just turn the car right instead of left and head on home.  But I turn left and go to the gym.  I usually find once I am about 10 minutes into a run that I feel just fine about it. And I am ALWAYS glad I did it when I am done.  If anything I have a problem working out when it would be smarter not to. (injuries/sickness)  But I am getting smarter!  When I was sick over New Years I missed two days of running. I DID NOT make them up the next week which I would have always done in the past. But I am trying to be more moderate -somewhat - and not get reinjured!

So like I said, when it comes to my self esteem in terms of feeling fit - I feel darn good! 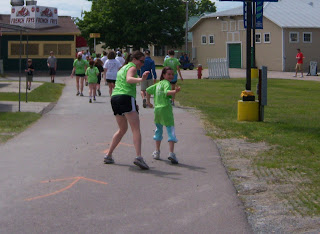 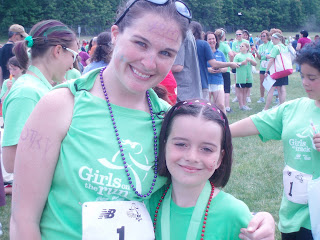 Also - yesterday someone gave me some Girls on the Run fliers. I talked to my girls (students) about it and I think I convinced every one of them that they want to do it. Of course their parents might not agree but at least the seed is planted!  Emily coached it one year and I got to help out at the race which was just awesome! I plan to go this year as I  have some girls who are 100% doing it!

Enjoy the snow, sun, fog, rain, whatever the weather Gods are bringing you!
Posted by ajh at 1:58 PM

If a blizzard there means none here, then you can have all of it girl! As you saw on FB, we got the cold but not the snow (about 3"); this is the first time I ever recall in the 15 years at this district that we have been called off for COLD. But can you imagine those poor 5-year olds walking to school in -19 degrees? So I was glad...for their sake. Well, and I got another day off work :).

I love that you have no excuses, you get the job done...because you know how good it makes you feel in the end, and that's the reward!

Fingers crossed for some big snow for you!! :)

i thought (briefly) about going to the gym to run, but the roads here were pretty bad so i stayed home and did yoga instead.

Your dedication is so inspiring!

It's great to hear about your motivation!
Have a nice "winter" training :)

P.S. to answer your question, 'Size 12 is not Fat' comes before this one. They are just okay... light reads with a little mystery. I like the main character.

Sorry to hear about your blizzard, but looks like you made the most of it!! Congrats on a great speedwork day! Hope the doc went well and it's nice to see you inspiring young girls to pursue something so good for them!

That cartoon is too funny!

A local chapter of Girls on the Run just started in my county. So exciting!

I'm so proud of you - you sound like you are doing awesome! What a great place you're in. Fit and feeling great!

Looks like you are having some horrible weather. You're not letting it stop you though - great motivation!

I'm actually thrilled with our 20+" today. We were overdue for a historic snow. I wanted the kids to experience one.
Go you for being so dedicated. You've truly made fitness a way of life!

We didn't get the storm they promised but everyone decided to close as of yesterday - even my gym.

Will you sell me some of your dedication?
Be safe in that storm. I've been thinking about you today as we were basking in 70 degree sunshine. This is totally weird.

Michael and I ran a Girls on the Run race a couple of years ago - it was great to see them experience the rewards of their hard work. It was a great time!

I'm impressed that you didn't miss your appointment and your gym date because of the weather.

I can definitely learn from you about making no excuses to miss a workout. I try not to miss workouts due to busy schedules but sometimes I do. Can work on that.

This week I haven't been well at all and missed my Wednesday run because of that. But I'm not going to make up for it either and just move on with the schedule. Good for you that you do that too and don't risk new injuries.

I really admire your tenacity in getting out in this weather! As you know, I am like you in not skipping workouts - I know exactly what you mean about feeling much better getting it done. But, I think a blizzard would definitely keep me from getting to the gym!

That photo has me in tears.

dedicated and focused - good for you for turning left when you want to turn right!

Girls on the Run seems like such a great thing to volunteer for.

You are an inspiration! At the risk of repeating myself :0

It takes just as much dedication to drive to the gym in the snow as to run in it :) I hope you were able to get your booty reattached since it froze off ;)