Two Great Runs on the Ocean 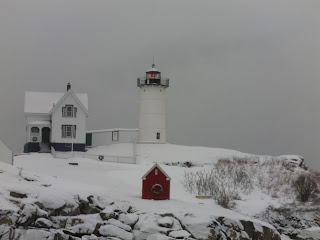 I had two cold wet great runs on the ocean.  No resting from my race when there is an opportunity to run at the ocean.  Monday morning I opened the hotel room door to check the temperature and immediately said, "Oh @#$%!" 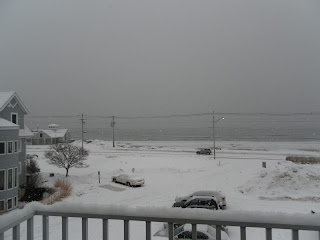 I COULD NOT BELIEVE IT

There was a bunch of snow on the ground and I so wasn't mentally prepared to run in the snow.  But I am who I am so I stopped swearing, got dressed a little more aggressively for the weather and headed out the door.  There were 2-3 inches of light - COLD - fluffy snow and my ankles were immediately cold.  It was hard to know where to run. There are no sidewalks anywhere in the Northeast because of all the snow.  So I was on the side of the road but it was hard to tell exactly where I was in the road.  There was no traffic at all so it wasn't too much of a problem. When  I anticipated this run I was thinking of gazing at the beautiful ocean  and listening to the waves rolling in. Well no.  I could barely see the ocean. 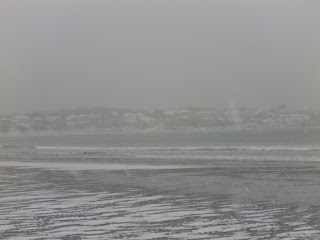 There is a row of houses on that cliff.
The tide was out and visibility was practically nil.  I ran to Nubble Point Lighthouse, one of my favorite spots in Maine.  There was a man there taking pictures so I was not the only nut out there.  I got him to take a picture of me.  He probably thought I was going to stand there sedately and seemed a little surprised as I ran toward him! 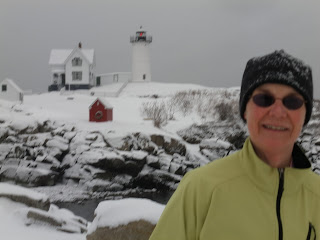 Then I continued around the point to "see" more of the ocean. I did run on the beach just a little but I got my feet rather soaked and gave up quickly.

Tuesday I got up very early and headed out to catch the sunrise. 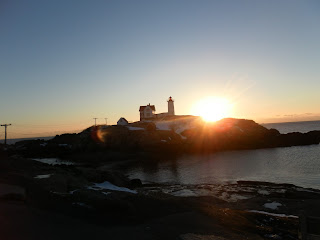 Love seeing the sunrise on the ocean!
It was very cold but that's the norm so what can you do?  It was very clear and gorgeous.  The sunrise did not disappoint.  On the way back I thought I would go down to the beach.  My husband is always warning me about slippery steps.  Well he wasn't there to warn me and I was hurrying to get down to the beach without a care in the world when my feet went out from under me.  I instinctively grabbed the railing but the railing was ringed with ice so I "slid" the rest of the way down. 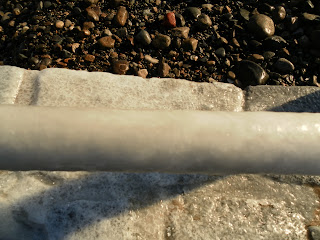 The very icy railing - that saved me! 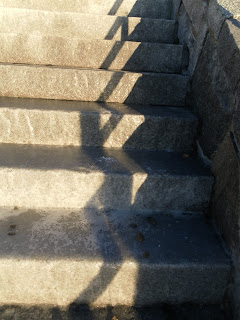 The slippery steps
The only thing that hurt(s) is my side where I crashed into the railing but I really could have been hurt. I stepped quite gingerly up them when I was leaving believe me. 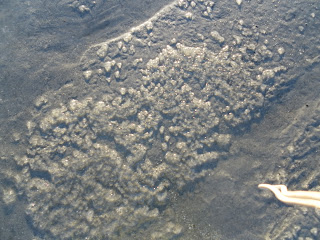 Jill, these two pictures are for you as you said:
btw, it can't be THAT cold, the ocean isn't frozen yet.
I'm seeing lots of ice around here, it's cold! 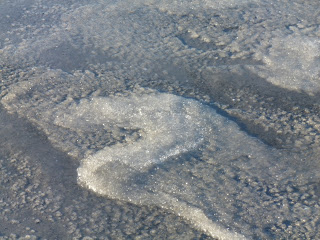 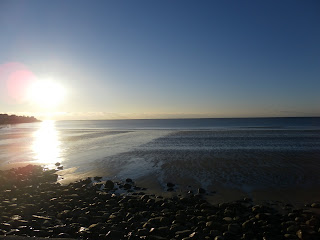 Beautiful photos!!
I'm glad you didn't get hurt worse on those stairs. Yikes!

I am so glad your third graders did not hear you. :-)
Nike sells anything for only $36? Really. Good find.
As for your runs, I can't say anything. I am speechless.

Those first couple of pictures look amazingly cold and dreary, but being a lover of all things extreme (and any thing on the Atlantic coast) I can understand your enthusiasm! I love Maine too.

I slid on some stupid papers in my son's room today, but it was 68 degrees in our house - ha. I seriously thought I pulled a groin muscle...but all okay now. Dang kids! I'm glad you weren't seriously hurt, that railing looked really bad.

You always get the best finds at the outlets, come spring you are going to be the best-dressed blogger out there - yay for you!

Nice job getting that crazy, icy, cold run in girl!!

I would run in the freezing cold and snow to see that lighthouse - AWESOME!

Looks tropical. My kind of place.

Those pics of the sunrise - just beautiful! I hope you don't bruise too badly. It'll probably help if you put some ice on it ;)

That sunrise is gorgeous! You really live up to your blog name Andrea: you rock for heading out a day after your half and run in the snow.

And those slippery steps could so have happened to me :) Glad to know you didn't hurt yourself too much.

I can't believe those pictures of the snow. Beautiful, but wow! You are so dedicated to still do your runs when it is so cold. Glad you didn't fall really bad on those steps! We pay half our salaries for Nike here in SA.

That light house is amazing, that first pic should get framed! I'm so glad you didn't get injured on those stairs and brrr, this whole post has me literally shivering! Glad you are home, but it looked beautiful and sounds like you had a grand time!

Makes me feel cold just looking at the pictures! Be careful on that ice - after all the snow we had, my most scary moment was last week when the car skidded on early morning ice on the road. You couldn't see it, but it can be so dangerous.

I am cold just looking at those pics--but I will say that they are beautiful. Glad you enjoyed yourself!

Wow, what great pictures. I have never been to Maine but your pix certainly make me want to go. But I think I will go during the summer! :)

I have a shiver just LOOKING at those pictures. I can almost smell the cold... but the beauty is warm! Glad you got to enjoy it, and that you weren't hurt badly on the fall!

WOW....the scenery is awesome. It is nice to see someone so enthusiastic in winter running!

I too love the OCEAN but in the summer! I got cold just looking at the pics. Speaking of show fetishes, I went out shopping for tennis sneakers and bought another pair of Asics running sneakers!

Congratulations on the race and wow - those are some amazing pictures!

I
am
such
a
wimp.

you amaze me - it's beautiful in PHOTOS but how you run in it is beyond me.

My son was sitting by me as I was reading this post, and he was so excited to see Nubble on your blog - he is fascinated with lighthouses and this one is his favorite (grandma leaves in Portsmouth, NH). I love that you ran on Monday, in the snow. I did to! I had the day off, so could not miss the opportunity!

Beautiful pics in spite of the cold. Glad you didn't hurt yourself on those steps, that could have ended badly.

You are crazy hard core... but those sunrise pics are beautiful!!! worth the run! :)

Getting all caught up!
First off, congrats on the great half!!! So excited for you! Well earned and well deserved!
Second, you had to one up me, didn't you!? I thought I had crappy weather, looks like you take the cake on that! So be proud, I would have chickend out!!
And you run in some of the most beautiful parts!

You didn't miss the opportunity to run at the ocean! Beautiful photos!

I've just red your comment on my blog and I'm so sorry that you're sick and will probably miss workouts :( I hope you'll feel better soon :)

Love your new header! and that first picture is really beautiful! I hope your side doesn't hurt anymore after that fall.

Those are beautiful pictures, but falling to get some of them stinks. Where are those men when we need them to annoy us like that? :)

Stunning pics! Sorry about the fall!

The pictures are beautiful but probably not taking a tumble for. I remember seeing snow at the ocean when I lived in Boston---being from CA it was weird to see snow on the beach but also super cool!