Sick
I ended up staying home sick on Monday.  My alarm went off but once I got up I quickly realized I did not feel at all well.  At first I called in and said I would be in for the morning. Then I thought about it and realized I would be pretty miserable. Yes, I had a lot to do at school but it will wait.  So I called again to say I would be out all day.  I hung up and then I couldn't remember if I really said I would be out all day so I called a third time.  The person who calls for the subs almost had a heart attack when she saw all the messages  not realizing 3 were from one idiotic too sick to think clearly person. So I spent the day reading blogs and Facebook taking naps and getting better.  Back to school today but I can't say I felt all that good!

Sick
Today at work I was there but not in my classroom.  I had meetings all day.  What fun - not! By the end of the day I felt almost as miserable as the day before. I considered skipping my workout but thought I would give it a  try.  Best decision I could have made!  I even went ahead and did the speed workout I was going to put off until tomorrow.  It went so well it was almost effortless.  Where did that come from?
Sick
Okay if you have been following me for awhile you know that I truly love winter.  I love the snow. I love watching the snow.  I love running in the snow.  I don't let cold temps keep me inside.  But there is  just a small part of me that is getting sick of winter.  Yep!  You heard it here first.  AJH is getting ready for spring.  Maybe it is seeing all those pictures of all of you running on green grass in shorts and short sleeves.  Maybe it is my two new running skirts just waiting to be worn.  Maybe it was that 6 inches of snow I found on my car this morning when I didn't even know it had snowed. Maybe it was that bitter cold breeze across the back of my neck as I walked to my car after my workout.  Whatever.......!  I'll manage.  I won't be making any plans to move.  But it is supposed to be in the 40s this weekend and I'll take it! 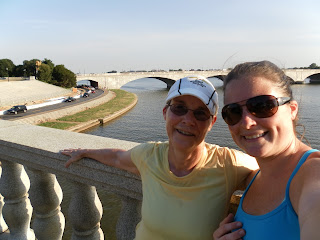 I was so hot here I was dying but a nice middle ground
would do!  I'd be happy to be wearing one layer on top.
It could be long sleeves and capris on the bottom!
Posted by ajh at 8:42 PM

I am sorry you are under the weather. BUT you did speed work??? Really? Now I am really impressed. (LIke I was not impressed before.)
Hope you will be feeling 100% soon. Reading blogs is proven medicine for any ailment.

Bummer! But I know how you feel, I just emptied a box of tissues from blowing my nose and sneezing. Get better!

I feel your sickness pain. I just made a post about me being sick. But you still do your workouts, speed work no less! If I tried to continue running I would end up in the hospital.
I hope whatever got hold of you has already let go.

My mom was a teacher for 30 years, and my daughter is currently in college to become a teacher ... you gals don't get enough credit. Thank you for your service!

Get well soon! At least before your vacation!

I'm getting sick of winter too! It's supposed to be in the 60's tomorrow. Brrrrrrr.

Getting sick would be an occupational hazard for you - all those germ-ridden kids! Hope you're feeling better soon.

Hope you're feeling much better! Amazing that you had an effortless workout when you were feeling so yucky.
Hope you get some nice weather soon! This week has been pretty nice down in DC.

Hope you're feeling better by now!

I love Winter too (well not the snowy part of it) but by the end of every season I'm done with it and look forward to a new one. I have to admit the weather is pretty good these days here, right now when I look outside the sun is shining, so I'm not as bored with Winter as I'm usually this period.

Hope you are back to 100% soon! Our mornings are slowly getting darker and cooler. The sun is certainly on its way north.

Nothing better than a sick day to help you catch up on blogs :) Glad you are feeling better!

Feel better! Never cry uncle to winter--we can outlast it!

Hope you feel better by now - how strange, the speed work felt better the next day...go figure!
BTW, I tried to answer your school questions in my next post!

Glad you took the day off to rest up! Awesome getting your speed workout done the next day.

And YES I am so sick of this winter...

hope you are feeling better, I'm starting to tire of winter too!

I'm ready for spring too, I hate to admit it, but I am. Sorry you're sick! I've had some kind of weird bug for a few days now. We both need some SUN! Feel better!

Feel better soon!! I am right there with you - I love winter! But, it is nice to have warm days here and there.

Hope you are feeling better! Rest up and eat chocolate :)

Sick of winter?? AJH?? What is the world coming to? :) It's just time for spring to come, can't deny that!! Glad you're feeling better!!

Hope you're feeling better by now. Sometimes when you feel a bit ropey you can have a great workout. I've had some unexpected great runs while hungover or with a cold! Some things just don't make sense...

I hope you'll get well soon!

Sorry you weren't feeling well! I was laughing when I heard Emily say she hates the cold, but I hear you on winter! After Christmas, it seems pointless! ;)