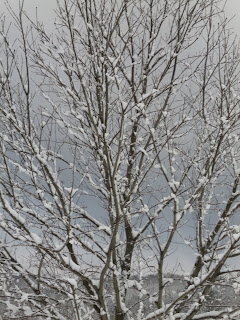 I had a long run today and it certainly could have been better. I'm not going to talk about the temperature and whether I thought it was hot or cold.  It was quite funny how many of you gave me grief for calling 15 perfect for a race.  Never entered my mind anyone would disagree. 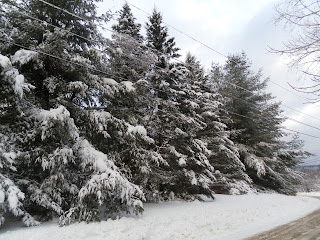 Today the roads had the remnants of yesterday's storm.  A majority of my run was like running through soft sand.  I think I sang this same song last weekend.  But this week I went 12 long miles!  Once I turned around and was on the last few miles the road was fairly clear but the damage was done. I was shuffling (phrase picked up from Andrew who must have had somewhat of a similar run) along and could not seem to pick up my pace.  I wanted to turn around early but I hung in there and got the whole run done! 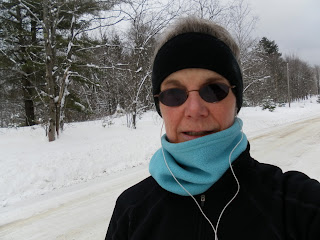 This was more than half way - no choice to quit now.
I was on my way home! 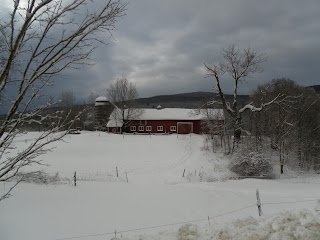 I did get my camera out from time to time and take some pictures.  Brilliant idea as each time I had a chance to rest. I listened to several podcasts on my Ipod as T didn't come down because the roads were too bad. 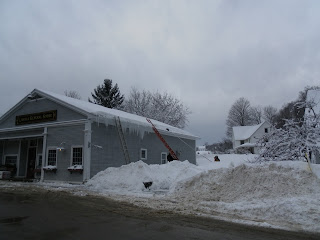 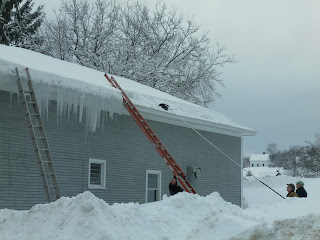 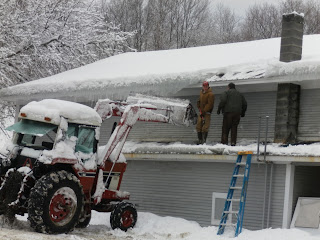 I saw MANY more people outside than usual.  Everyone was shoveling out.  It is getting so there is nowhere to put the snow.  At the General Store they were trying to clean off the roof - on both sides.  (This is what my husband was doing at home yesterday.) There were 3 guys on the first side - two working and one watching.  Then on the other side they were using the tractor.  I wasn't quite sure how and I didn't hang around to find out.  I JUST WANTED TO GET HOME! ENOUGH ALREADY!
Posted by ajh at 9:14 PM

Has anyone ever told you you are hardcore? :)
WInter storms make for beautiful pictures once they are over but boy, they also make for lots of work.
Have a great week.

That's A LOT of snow!
We had a bare dusting and people were going crazy. It is almost funny people-watching at Wal-Mart as they emptied out the bread and milk sections. Ha!

All that snow...I'm going crazy. It's not that I don't like snow, but enough already!

Wow, I'm totally impressed with 12 miles in that! Have a great week! :)

I had to dodge a couple of snowplow trucks on my run today. And my feet kept slipping on hard packed snow. Was tough going :) Reminded me of you and all your snowy scenery.

Congrats on those 12 miles!

Congrats on 12 miles in the snow! All that snow does look beautiful, but it's a pain to get rid of.

OMG - you ran 12 miles in that? Hardcore, very hardcore! Hope you got to rest afterwards - you earned it.

Nice getting your long run in with the soft snow - it is like sand running! Glad you are back doing what you love. It has been quite a while since I watched the fine art of roof shoveling :-)

Wow, I am so glad we don't have snow here at the moment. Great running!

Running in sand - yes, that is exactly what it felt like yesterday. brutal!!! Great job on your long run!

Yep...we had almost identical runs yesterday...I almost got hit in the face with flying snow from people blowing out their drive ways.
Mother nature OWES us big time...

12 miles in those conditions is nothing to be sad about, I am impressed! Those kinds of runs only make you stronger. Rest up!

Good for you for getting it in during that kind of weather! You are tough!

way to stick it out. you'll be much happier with the weather when you come to DC

If it is getting to be nowhere to put the snow conditions, remind me I'm never coming to Vermont in winter! :)

You're totally BA!!! That's treadmill weather in a heartbeat in Jill-land!

You're a rockstar! Running such a long distance in that weather! There aren't many people who would do that. Great job!

Great job! I guess I wouldn't think to comment on the 15 degrees because I know it's all relative. I figure you're more used to the cold up there in VT.
Beautiful pictures!

holy cow, you're hardcore! We have so much snow, and guess what? It's snowing.....again.

You have a strong inner drive and a LOVE for the out doors. I'm just in awe but I do think the snow is gorgeous so I know what you do what you do. It's almost as if you MUST take advantage of it!
Nice job!

Such beautiful pics. I seriously don't know how you run in that weather. It's impressive. And, thanks for your awesome comment on my Blog. I really appreciate it.

Your perfect 15 - it's funny how we get used to certain running conditions depending on where we live. Interesting!