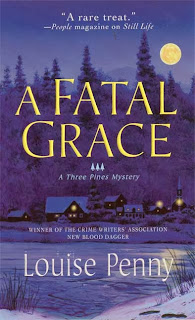 This is the second book in the series I started reading on the way back from Oregon. The jury is still out on this one. I am not sure if I'm going to finish it.  It hasn't pulled me in yet.  Here's what Amazon has to say:
Welcome to winter in Three Pines, a picturesque village in Quebec, where the villagers are preparing for a traditional country Christmas, and someone is preparing for murder.
No one liked CC de Poitiers. Not her quiet husband, not her spineless lover, not her pathetic daughter—and certainly none of the residents of Three Pines. CC de Poitiers managed to alienate everyone, right up until the moment of her death.
When Chief Inspector Armand Gamache, of the Sûreté du Quebec, is called to investigate, he quickly realizes he's dealing with someone quite extraordinary. CC de Poitiers was electrocuted in the middle of a frozen lake, in front of the entire village, as she watched the annual curling tournament. And yet no one saw anything. Who could have been insane enough to try such a macabre method of murder—or brilliant enough to succeed?
With his trademark compassion and courage, Gamache digs beneath the idyllic surface of village life to find the dangerous secrets long buried there. For a Quebec winter is not only staggeringly beautiful but deadly, and the people of Three Pines know better than to reveal too much of themselves. But other dangers are becoming clear to Gamache. As a bitter wind blows into the village, something even more chilling is coming for Gamache himself. 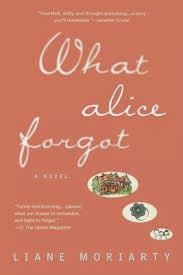 This is the third book I have read by this author in less than 3 weeks. I am really liking her books although none as much as The Husband's Secret.  They're predictable but not completely. There is always something that surprises me and always characters I like. I had actually started this book once before and not read it.  Worth that second try for sure.
Amazon:

Alice is twenty-nine. She adores sleep, chocolate, and her ramshackle new house. She's newly engaged to the wonderful Nick and is pregnant with her first baby.


Alice has slipped in a step-aerobics class, hit her head and lost a decade. Now she's a grown-up, bossy mother of three in the middle of a nasty divorce and her beloved sister Elisabeth isn't speaking to her. This is her life but not as she knows it.


Clearly Alice has made some terrible mistakes. Just how much can happen in a decade?

Can she ever get back to the woman she used to be?

Happy Reading! Always let me know if you are reading a good book.

I've been reading both the Lexi Carmichael and Lexi Graves series books and both series have a new book coming out in the next few weeks. I'm excited for the new books!

Thanks for the recommendation. I requested books by these 2 authors from my library.

I can find those books in the International bookstore of Rome

I'm always impressed with how many books you get through. I love to read but there never seems to be enough time. And then there's the tired factor - I get a chapter read and my eyes are shutting.