I had a lot of reading time while traveling and while Emily was working and running a marathon.  I had my kindle with me and except for the fact that I forgot the small light it worked just fine. 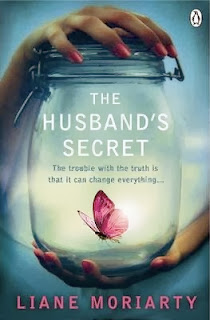 The Husband's Secret - Liane Moriarty
An Amazon Best Book of the Month, August 2013: Liane Moriary is probably doomed to be forever labeled a writer of “chick lit.” But despite its dopey name, her new novel, The Husband’s Secret, is better described as a comedy of manners and one with a serious undertone. As in her previous books, most successfully What Alice Forgot, Moriarty here wittily and observantly chronicles the life of middle aged, middle class Australian women, suburbanites who grapple with prosaic issues like marital fidelity and torturous ones like moral guilt and responsibility. You can’t help but laugh along with the small observations--“And there was poor little Rob, a teenage boy clumsily trying to make everything right, all false smiles and cheery lies. No wonder he became a real estate agent.” But it’s the big ones--Can good people do very, very bad things, and what, exactly, are we responsible for, and for how long?--that will make you think. This is a deceptively rich novel that transcends its era and place at the same time that it celebrates same. --Sara Nelson

I really couldn't put this book down - even if I had been doing something and had a reason to put it down.  The story and all the connections sucked me in.  Great book to be reading while having nothing else to do.  I'll be looking for more books by this author. 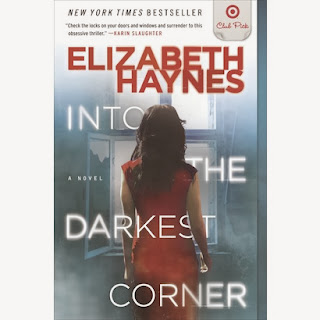 Into the Darkest Corner - Elizabeth Haines

Below is what Amazon has to say. My husband would say it sounds like a movie I would watch and he is right.

Catherine Bailey has been enjoying the single life long enough to know a catch when she sees one. Gorgeous, charismatic and spontaneous, Lee seems almost too perfect to be true. And her friends clearly agree, as each in turn falls under his spell.
But what begins as flattering attentiveness and passionate sex turns into raging jealousy, and Catherine soon learns there is a darker side to Lee. His increasingly erratic, controlling behaviour becomes frightening, but no one believes her when she shares her fears. Increasingly isolated and driven into the darkest corner of her world, a desperate Catherine plans a meticulous escape.
Four years later, Lee is behind bars and Catherine—now Cathy—compulsively checks the locks and doors in her apartment, trusting no one. But when an attractive upstairs neighbour, Stuart, comes into her life, Cathy dares to hope that happiness and love may still be possible . . . until she receives a phone call informing her of Lee’s impending release. Soon after, Cathy thinks she catches a glimpse of the former best friend who testified against her in the trial; she begins to return home to find objects subtly rearranged in her apartment, one of Lee’s old tricks. Convinced she is back in her former lover’s sights, Cathy prepares to wrestle with the demons of her past for the last time.
Utterly convincing in its portrayal of obsession, Into the Darkest corner is an ingeniously structured and plotted tour de force of suspense that marks the arrival of a major new talent.

Again - I'll be looking for more books by this author.  Apparently this was her debut novel. It is violent and may not be for everyone.
Posted by ajh at 6:35 PM

I'd like to hear what Char thinks of the first one.

Ooh, I'll have to read the first one - see if I fit the stereotypical middle-aged Australian woman mould.

The last one sounds good. Going to remember that one.