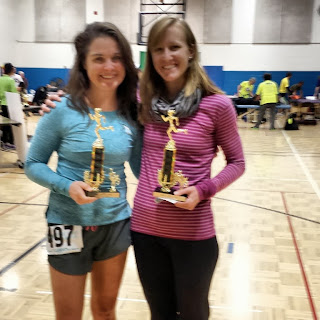 1. First I never officially congratulated my daughter, Emily, on her awesome race at the JFK 50 Miler. It was her second fifty miler. She placed in the top ten (7th for women) with an amazing time!  My husband kept asking me what all the results were and I kept having to explain that many people were still out there running. Not everyone finished it in less than 8 hours. And I am not dissing those who didn't. Anyone who runs fifty miles deserves huge kudos.  And according to Emily the first 16 miles, most of which were on the Appalacian Trail were very difficult and technical. Cannot imagine so many things about doing this race.  Her fifty mile pace was faster than my pace at my turkey trot 5K.  Oh well. I am very proud and amazed by her. 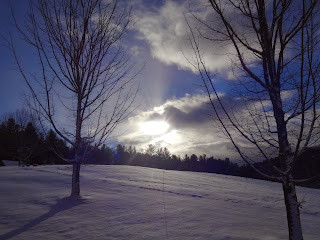 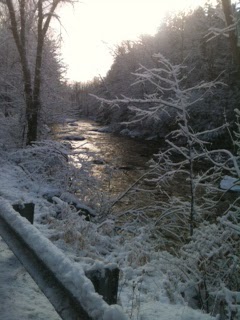 2.  On Thanksgiving I got out and ran in the first real snow of the season. I was delighted to discover I still love running in the snow and cold.  I was dressed for it this time. I only went four miles because there was the whole cooking Thanksgiving dinner thing waiting for me but it was a glorious 4 miles. 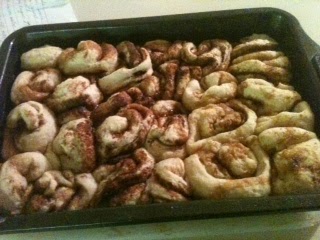 3.  I admit it. I am a Black Friday shopper. But this year was different. A good friend's mother passed away and her funeral was Friday.  Her mom was 102 and had a good life.  Her husband passed away  less than a year ago at not quite 100.  MJ's mom died on her dad's birthday which is rather nice.  Years ago her mom was a cook at the school I taught in.  They don't have school lunches like those anymore. Seriously. Homemade bread and rolls was the norm. Her mom loved to serve food to everyone and was well known for her cookies and doughnuts. So at the post funeral meal there were doughnuts and tons of cookies.  I made cinnamon buns but forgot them at home. But I took them to my friend's house last night so they weren't made for nothing!  This woman was also one of the people I write to weekly.  I wasn't sure she really wanted to hear about my running, biking and races but her son in law told me it was a world she didn't know and seemed interested in. I figure regular mail is always a good thing.  So rather than shop on BF (well maybe I did some on line and went after the funeral) I attended her funeral.  It is sad how you see people you never see at funerals.  It's good to see them of course but I need to make the time to see them at other places.

I agree about seeing people in those situations - and I always feel awful that I get so wrapped up that I don't reach out during the year - uh-oh - I feel a resolution coming on! Congrats to your daughter!

Your daughter is a beast. I am going to believe she gets it from you!

I had no idea Emily is your daughter! Congratulations to her! I'm sorry to hear about your friends mom. It sounds like she touched a lot of people.

Yay Em!!
Those rolls look amazing. I didn't go bf shopping, I ordered some online and then just now on Athleta, Merry Christmas to me!

I'm not a black Friday shopper myself, but it's always sad when you have a funeral to attend

Sorry you had to attend a funeral but it sounds like she had a long, fruitful life. And it is good to see people you normally never see.

YAY Emily! I have much respect for someone who runs ultras. Please pass on my congratulations to her!

50 miles is amazing! You must be really proud.

Sorry about your friend's mom. It's always rough.

I'm sorry for your loss.
I am not looking forward to the snow! It's not as beautiful here as it is there I think.

It was so cool to follow Emily's progress. She's amazing.

We haven't had any snow yet, but we've been out running and riding in some pretty cold temps. I've had fun, so I'm really looking forward to a snowy run...but NOT to the high of 28 for this Saturday's 8-hour.

Very sorry to hear about your friend's mother. It sounds like she had a wonderful life. It's neat that you kept touch with her the way you did.

I think it's a beautiful story of your Mom's friend: that you gave her joy with your letters!

Emily is a really great runner. Well done to her! I still haven't run in snow... I think you had a good black Friday.

Congratulations to your daughter! She's a great runner and you can be proud of her.

Sorry to hear about your friend's mom.

Congratulations to Emily. People who run 50k events are amazing, incredible and just a little bit crazy - but in a good way.

Congrats to Emily! WOw your real snow is gorgeous. I know what you mean about funerals. We all 'say' we'll be better about getting together but it rarely seems to happen. Cinnamon buns are a deadly favorite of mine.