It's Wednesday, What Am I Reading?

I finished last week's book by Louse Penny. It started out slowly but I enjoyed it enough to know I'll be looking for the next in the series.  I've only read  one book since. This book is by an author I've read and liked before but she has stepped up her game for this one.  It is more than just chick lit.  Here's what Amazon has to say.

Jojo Moyes’s bestseller, Me Before You, catapulted her to wide critical acclaim and has struck a chord with readers everywhere. “Hopelessly and hopefully romantic” (Chicago Tribune), Moyes returns with another irresistible heartbreaker that asks, “Whatever happened to the girl you left behind?”

France, 1916: Artist Edouard Lefevre leaves his young wife, Sophie, to fight at the front. When their small town falls to the Germans in the midst of World War I, Edouard’s portrait of Sophie draws the eye of the new Kommandant. As the officer’s dangerous obsession deepens, Sophie will risk everything—her family, her reputation, and her life—to see her husband again.

Almost a century later, Sophie’s portrait is given to Liv Halston by her young husband shortly before his sudden death. A chance encounter reveals the painting’s true worth, and a battle begins for who its legitimate owner is—putting Liv’s belief in what is right to the ultimate test.

Like Sarah Blake’s The Postmistress and Tatiana de Rosnay’s Sarah’s Key, The Girl You Left Behind is a breathtaking story of love, loss, and sacrifice told with Moyes’s signature ability to capture our hearts with every turn of the page.

Moyes (Me before You, 2012) writes with such clarity that one can almost see the eponymous 100-year-old painting at the center of her wonderful new novel. Also crystal clear are the emotions that protagonist Liv Halston attaches to the portrait. Gifted to Liv by her late husband, David, in celebration of their wedding, The Girl You Left Behind becomes a personal icon, embodying all that was good about their brief marriage. What is less clear is the painting’s provenance and who has the right to assert ownership. Will Liv’s notion of ownership unravel when the artist’s heirs sue to reclaim what they call ill-gotten goods, seemingly misappropriated by German soldiers during WWI? Did the artist’s wife—the subject of the portrait—give or sell it? Can anyone establish a clear trail of legitimate ownership? Does emotional attachment to a work of art have cash value? Can love ever trump greed? At its heart, such questions, thrumming in the background, add depth to what is an uncommonly good love story. --Donna Chavez 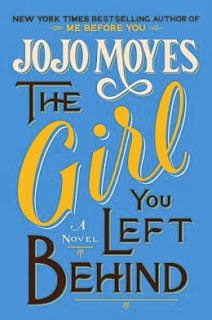 I don't always like books set in two time periods as this one is but I highly recommend this one. I did find when I recorded it in my book log that I didn't even finish the 2012 book by this author.  Interesting. 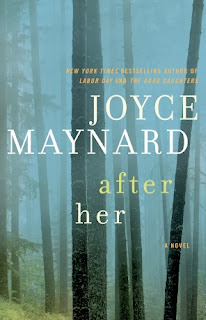 What is next?  I picked out of my pile After Her by Joyce Maynard.  I keep trying to find more books I like by this author but I have liked none as much as the YA novel about 9/11 The Usual Rules.  I loved the characters in that book which always is what makes a novel stand out for me.
Here is what Amazon has to say:
The New York Times bestselling author of Labor Day and The Good Daughtersreturns with a haunting novel of sisterhood, sacrifice, and suspense.
I was always looking for excitement, until I found some . . .
Summer, 1979. A dry, hot Northern California school vacation stretches before Rachel and her younger sister, Patty—the daughters of a larger-than-life, irresistibly handsome (and chronically unfaithful) detective father and the mother whose heart he broke.
When we first meet her, Patty is eleven—a gangly kid who loves basketball and dogs and would do anything for her older sister, Rachel. Rachel is obsessed with making up stories and believes she possesses the gift of knowing what's in the minds of people around her. She has visions, whether she wants to or not. Left to their own devices, the sisters spend their days studying record jackets, concocting elaborate fantasies about the mysterious neighbor who moved in down the street, and playing dangerous games on the mountain that looms behind their house.
When young women start turning up dead on the mountain, the girls' father is put in charge of finding the murderer known as the "Sunset Strangler." Watching her father's life slowly unravel as months pass and more women are killed, Rachel embarks on her most dangerous game yet . . . using herself as bait to catch the killer. But rather than cracking the case, the consequences of Rachel's actions will destroy her father's career and alter forever the lives of everyone she loves.
Thirty years later, still haunted by the belief that the killer remains at large, Rachel constructs a new strategy to smoke out the Sunset Strangler and vindicate her father—a plan that unexpectedly unearths a long-buried family secret.
Loosely inspired by the Trailside Killer case that terrorized Marin County, California, in the late 1970s, After Her is part thriller, part love story. Maynard has created a poignant, suspenseful, and painfully real family saga that traces a young girl's first explorations of sexuality, the loss of innocence, the bond shared by sisters, and the tender but damaged relationship between a girl and her father that endures even beyond the grave.

I was surprised to see a Jojo Moyes book up there. After your last one I thought you wouldn't be reading her again.

The last one sounds interesting to read.

About the photo challenge: I start this on December 1, that's why you haven't seen it on my blog yet.

Maybe you've mentioned this before do you read 'actual books' or electronic books? I'm just curious. I'm a fan of the electronic version. My husband seems to prefer paper books.

I've been so busy with work that reading has gone out the window. I hope December is better.

I can't wait until after Christmas, when I should have a bit more time for reading! I'll have to look back at your reviews then!

I will have to add Moyes' book to my list! I loved Sarah's Key so hopefully this will be just as great - - although I do agree that stories that cross over different eras aren't my favorite. Hope you had a great Thanksgiving!

Before of all congrats on your "brutally cold turkey trot"! A very good finishing time. I like your "hooded" pic.
Interesting post. In this period I am reading many books about the Knights Templar.
I hope you had a good Thanksgiving.