My First But Not My Last Sky Dive

Why skydive?  I have always stated that I wouldn't mind doing it and the opportunity kind of became possible this summer. I decided I would do it to celebrate turning 60. Even though I said this I did nothing about it until just before my birthday when I finally made the reservation.  The family who owns the business has kids in our school so  I knew but didn't really know them.  But there was a connection of sorts.

We arrived at the field just before 6 pm on the evening of my jump. A few friends were coming to watch. I wish I had invited more people but it didn't really occur to me that many people would want to come.  But those that did had a great time and others have said they wish they had come.

First you get about a 20 minute talk on what to expect and do. Well first you sign your life away - hopefully not literally. 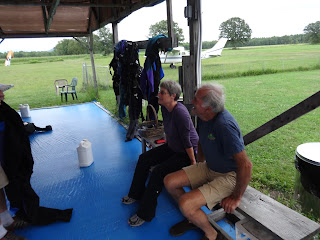 Then you start to get geared up.  Jaxon wasn't too thrilled when I first had the jump suit on and seemed a little leery of me.  My husband decided he was going to ride along in the plane but everyone else was staying on the ground. So in the plane would be myself, my husband, the pilot, my sky diving guide, and a guy who just wanted to jump. 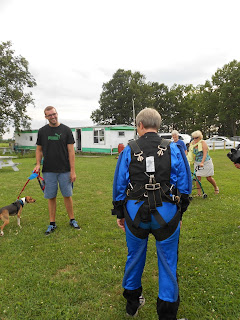 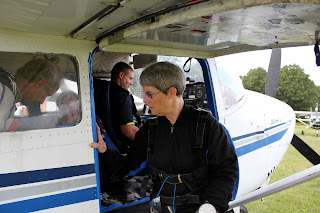 The flight to get to 12000 feet took about 20 minutes. It was a beautiful ride and it was fun to look at all the familiar sights from a different perspective.  I still wasn't nervous although the thought of the plane door opening was in the back of my mind......always. I had asked Ole (the guy I was diving with)  if anyone ever chickened out at that stage and he said, "Well if you say no, I hear go and off we go."  Yes!  I wouldn't have to work up my nerve, he would take care of it. 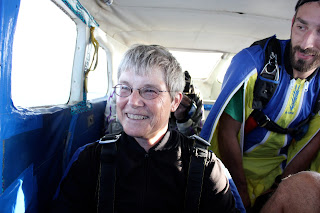 This is before the jump.  I look just a little bit excited.  The guy behind me is doing a solo jump. 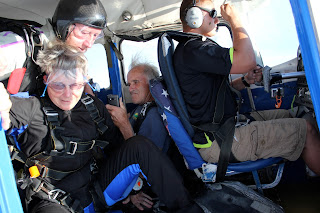 Now I need to move toward the open door.  When you get there you balance your feet on something.  It's not easy with the wind plus it was very cold.  I really mean.......it is not easy to balance your feet.  In fact it is impossible! 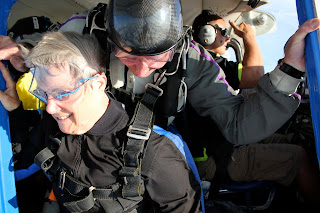 I'm still smiling but I can't quite believe I am choosing to do this.  Going out that open door into the clouds does not seem possible.  If it was up to me I would still be sitting there but I heard Ole counting to 3 and then there was a forward motion and we are out of the plane. 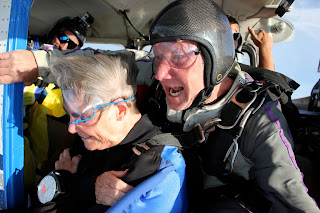 My cousin told me when he did it 15 years ago they had to pry his fingers off the door sides.
Maybe that is why they have you cross your arms now. 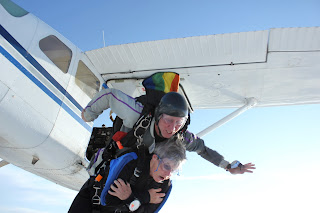 This is my OH SHIT moment.  I'm not so sure any more but there is no turning back. 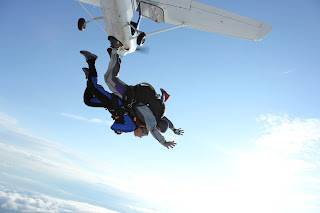 The free fall is completely awesome. It lasts about 45 seconds. I would have no idea of the time other than that I was told that ahead of time.  We were going 120 M.P.H.  He had told me to keep my chin up and arms out. 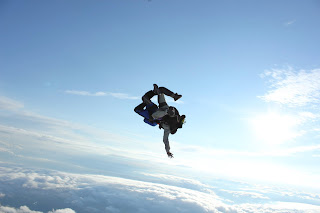 Then Ole pulls the first parachute???  not sure of the right terms and we slow down and it's time to look around.  The photographer comes to me and grabs my hands - to get some close ups.  I really liked this part a lot.  This lasted a decent amount of time. 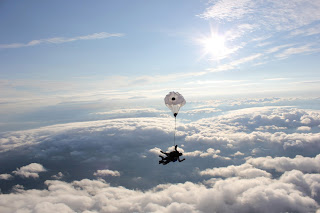 To say it was gorgeous was putting it mildly and yes I could enjoy it and look around.  If you look closely you will see I am smiling widely in almost every picture. When I watched the video last night with some friends, I must have said 30 times, "It was so much fun." 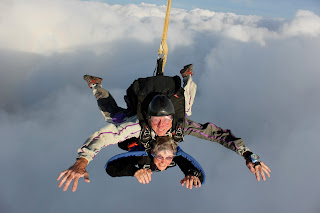 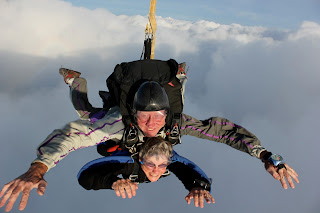 He pulled something down to let me steer a little. At least I think this was when it was. I need to do it again to figure out when things happened. 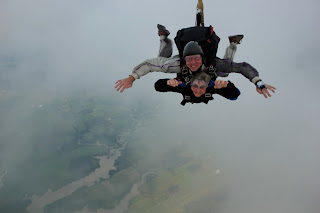 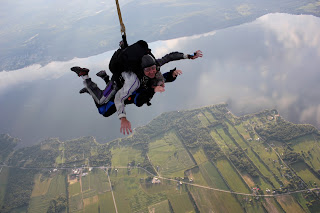 You begin to be able to see through the clouds. We did some fun turns but no flips.  I almost wanted to but didn't want to get nauseous. 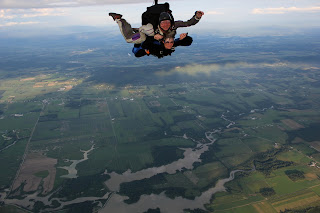 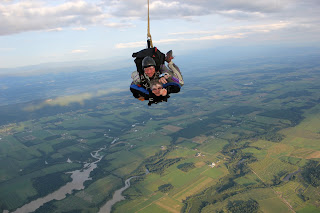 At this point Ole is tapping my shoulder as a reminder to look at the altimeter on my wrist.  When it is at 5(5000 feet)  I am to pull the ripcord (but if I don't he will.) 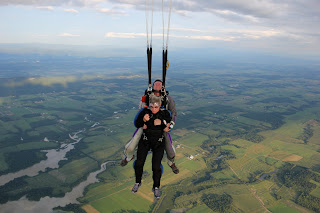 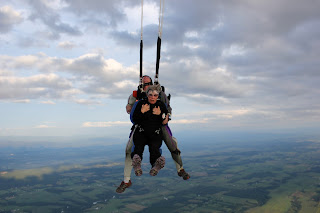 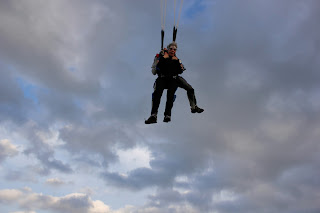 When I pulled the ripcord would have been my next Oh Shit moment and I dare say I screamed. You are yanked upward rather suddenly before it stops and you begin to descend. 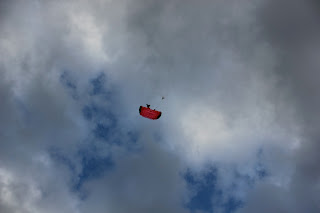 Our goal is to land near the flag.  I am told to keep my feet up. This landing worries me as much as anything as I do not want to jam my feet into the ground and mess up my ankle again. 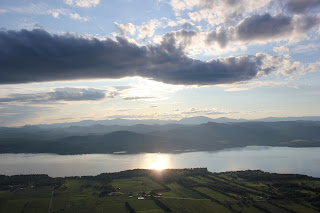 Gorgeous. This is where I do a lot of biking. 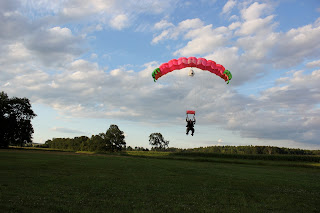 You land butt first and slide in. 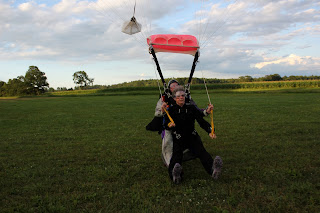 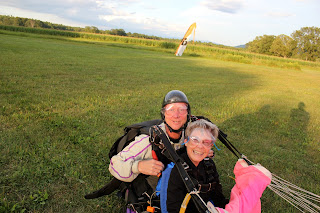 I cannot adequately describe how wonderful this jump was. I CANNOT wait to go another one. This is not going to be a one time thing. It may be awhile but I will go again. 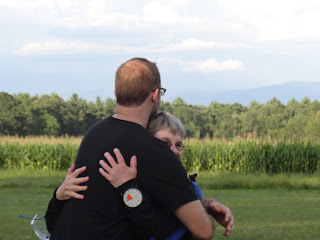 It was very special to have Jameson there to be part of it.  It did emphasize how far away Emily is but I've been lucky she's been close by for so many years. 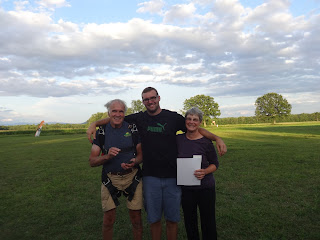 My husband is back down from his airplane ride which he loved.  It was a great evening for all of us.

There is also a video that came with all the still pictures.We'll see if I can insert it. If not the link will be here.

Then there was a keg of Switchback which everyone had been drinking while I was flying.  It was the best beer I have had in my life!

Late happy birthday.
I know, triathlon is not enough for you!
Which will the next surprise be?
You are an inspiration.

That is awesome! All the pics are so cool. How do they get the pics? Does someone else go out at the same time?

Way to celebrate your Birthday! You are awesome and super brave!

What a fantastic experience for you and what a great way to celebrate your birthday. Great pics!

I love the one of you and Jameson, it brought tears to my eyes.

Super awesome! I love it! As I said before I did sky diving when I was a student. This was the 1980's. I did nearly 200 jumps but then it became just too expensive...and studying was actually important :)

I'm terrified on a 2-story building looking out, no way in hell I could ever do that. You are simply badass!

This whole post made me smile from ear to ear. It almost made me want to go out and try it but then my usual voice of sanity (fear) took over. You're a braver woman than I. I hope you get to go again soon.

Awesome! So glad you had a good jump! I did it for my 25th birthday and it was truly unforgettable. Awesome pics. Love the new cover shot.

Awesome! Glad you got to go do that. My daughter and I plan to go skydiving as well. Every time we scheduled it so far, it's been called of due to wind.

Girl! You sure know how to celebrate! I would have wet my pants. :)

That is fun, fun, fun. I remember my first skydive; I was so intent on pulling it at the right time that I pulled it and flung into the great blue yonder - meaning I had to pay for it!

Love it!!! you are a braver woman than I am :) My husband taught skydiving for years but I was never brave enough to actually do it. AWESOME!

Your face in all these pictures! Pure joy! Well, except for the oh shit pictures, which I LOVE. What an amazing experience. You almost make me want to try. Almost.

Awesome! You are so cool, and what a special way to celebrate a special birthday. (Happy belated birthday, by the way.)
P.S. Pics and video totally rock.

What a way to celebrate your birthday. I am sorry that I missed it. I have no desire to jump out of a plane. The view looks similar to that from Snake Mountain :)

how awesome!! the pictures and video are amazing. the views, gorgeous! you are so brave! i don't know if i could ever do this!! (and happy (very) belated bday!!