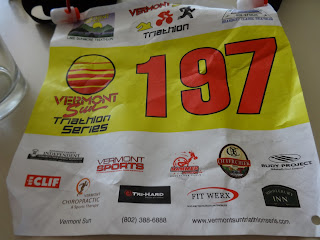 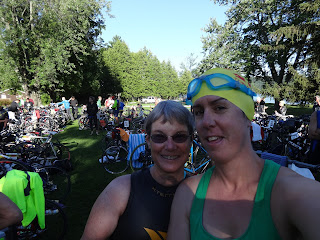 My friend, Sara, who did her first tri today.  She is hooked! 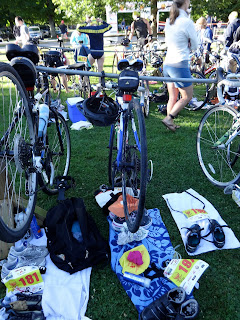 Not as organized as some times.  The woman
next to me put her stuff out between bikes
rather than under her bike. Last time
you could have used my transition area as a how to
set it up. 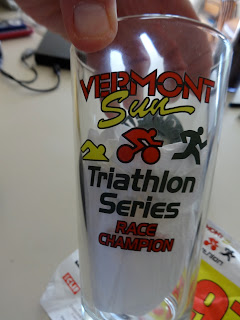 good job! By the way, being the oldest women out there is actually very cool. You rock!

I think you are too hard on yourself. Some races will be your best, some will be your worst, but MOST will be in between. I don't think you should be expecting always to be improving.

Congrats on another race! I think it's awesome that you were the oldest woman there!!

I think you are brave to even try one.

Great job!!! What a gorgeous day for it!!! Have a wonderful birthday :)

Sorry I missed it!

Congratulations. An age group win is a win regardless of time.

Well done with another triathlon in the bag! Great to win your age group! I really admire you for doing these. Very impressive!

You were the most "mature" woman out there! You shouldn't be so hard on yourself. While the clock may not lie, there are so many different factors that contribute to your time outside of the actual swimming, biking, running and transitioning that you really shouldn't sweat 28 seconds.

Congrats! I think you had a great race and you can be proud that you do this at your age. There aren't many that do that.

Congrats on the finish and the AG win (you beat all those in your AG who didn't compete)! I can't imagine swimming with the guys behind you. Sounds awful and like you would have been faster in the swim if that wasn't the case.