My bikes and runs are not usually so close. Usually I run the minimum I do (4 miles) except for one longer run which was today.  I rarely bike my minimum miles (10) but today I did.  So they were close.

I ran 9 miles not too long ago and it was a fine run. Even a good one. Today!  OMG!  I was figuring the number of miles left on my third mile and I knew that wasn't good. I had water with me which I didn't have on the 9 mile run.  I couldn't wait to get to the turn around and at least be on the second half.  I even sped up for a little bit then but it didn't last.  Truthfully it was hard but I never thought I couldn't do it. I was a bit surprised at how much I was sweating. The brim of my hat was DRIPPING as if it was raining. When I got home I was soaking wet and I do mean soaking.  I got my clothes off and went up and laid down on my bed for about an hour. I had nothing to give.  I closed my eyes and read. I thought of all I needed to do but I just couldn't get up.

Eventually I did and went on a bike ride. I know. I'm nuts. But today was a day I could fit it in.  But I did go a short distance and I didn't push. It was fine. When I got back I felt completely fine and showered and changed and went into school for those last minute things I needed to do before the first day tomorrow.  (school dreams tonight)

The only reason I'm doing long runs is because I am signed up for a half at the end of September.  With two tris coming up and work starting I'm not going to fit many more long runs in.  Why do I keep signing up for halves I don't adequately train for?  I have asked myself this a lot in the last few months.  The sprained ankle really threw a wrench into my plans.  So back to thinking about those halves.
Here are some positive things I can think about doing them.

Tris are only in the summer so I can't do  a lot of them.  Halves can fill that void.
I love to race.
I love being able to run 13 miles in a respectable time.
I like to travel for races and halves seem to be a good distance to travel for.
If you are racing somewhere scenic you can see a lot in a half.
I like medals.
I love ten milers but there aren't many of them around me.
I'm getting to where I am okay to race for fun.

Now onto the negative.
Training for  halves in the warmer seasons takes time away from biking.

Well, the positive outweighs the negative so for now I'll continue some halves. Although I don't plan to sign up for 5 next year. 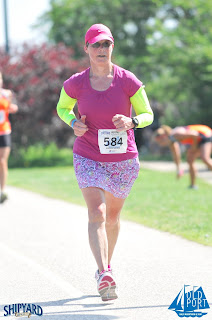 Shipyard the half that almost killed me.
At least it will be much cooler at
the end of September.

Training and racing in the heat is just so miserable. I had a 20 mile run this weekend with temps in the 80s and humidity over 80%. I changed clothes 3 times just to try to stay in something somewhat dry! I have a half Sat with high temps in the low 90s, so race start will be about 80....ugh!

I don't think I could have gone out and biked after that!

Because I don't ride your only negative wouldn't exist for me. You just had to go complicate matters by loving cycling as well as running. Another positive is that you don't have to spend as many hours running as you do when you're training for a full marathon so there's still a few hours that you can put towards riding.

You are THE racing machine!!! I love your lovely, perfectly coordinated race outfit - you are also the racing fashion diva!!! :-) Enjoy school tomorrow!

You are doing so much this year, incredible! The best part is how much you are enjoying it all. You are a great inspiration, keep it going!

Training is the heat is hard, but it does pay off in the fall! At least that is what I have been convincing myself all summer.

Doing halves I am not trained for seems to be my motto this year. I'm happy to say I've got none on the schedule for fall though. HOt runs like that are soul suckers.

I'm not a fan of running in the heat/humidity either. Luckily this summer hasn't been too bad so far (knock on wood! I have a half in less than 2 weeks and I'm praying for fall-like weather).