What do I Wear - Help Please (and some fascinating info)

It looks a little cloudy. I'd take
that again. 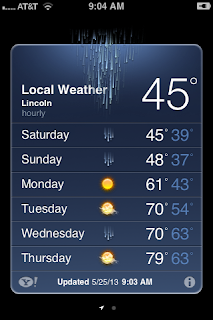 Not so much this.


Losing some excitement for my favorite race.  It has been rainy and cold here for the past few days and the prediction for Sunday is no different.  The forecast presently says a high of 48 and a low of 37 with rain. We all know how to dress for cold and even prefer it for races but throw in the rain and in my opinion it just becomes miserable. Rain with warmth - no real problem but being cold and damp is just plain miserable. I have no idea what to wear. I have never found anything that works.

I am planning on how to change and shower when I am done my half so I can go watch my friend. I talked her into doing this - her first half- and she is remaining enthusiastic. I have to go watch her and cheer her in.  I have a friend who is going to cheer me on. I gave her an out but she likes cheering at races and has many people to cheer for.  I don't expect my husband to go and that is truly just fine. 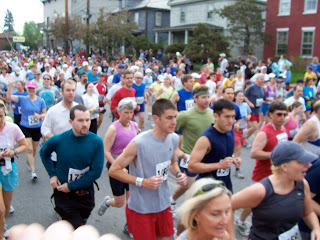 I'm in the blue shirt, pink hat.  Smiling. I am smiling
in all the pictures from my first marathon. I had so
much fun!!!  I was great at finding Emily and Jameson
who were watching me too. I would see them before they would
see me.

Also I found the information below rather interesting. VCM has been posting lots of info on FB and the most recent one was about finalizing the results. I had no idea races went to this much trouble but I found some of the scenarios fascinating.

The shame, the shame!  Glad they caught him.
Last year VCM also posted pictures of bandit runners on FB and asked for help identifying them. They aren't fooling around!  So WHEN you come do VCM bring all your honesty with you!
Posted by ajh at 9:16 AM

I have no suggestion as to your what to wear question. But man, those are interesting tidbits as to how people cheat. Glad they all got caught.

Who even thinks of that stuff? I'd say dress in layers that you can shed and pray it gets warmer and the forecast is wrong!

I usually throw a windbreaker over the top of a lightweight long sleeve shirt. You can always take it off if you get too hot, but if you are cold and wet, it holds in the heat.

Hope it's not a miserable race!

When I did the nighttime half marathon, it was entirely in the rain and temps dropping from high 40's to low 30's. As long as I was running, my body was warm enough. You might think about light gloves and a hat.

Whoa, I had no idea results were analyzed that closely! I would wear shorts or capris, a long sleeved shirt, throw-away gloves, and a hat--a must for me to keep the rain out of my eyes! If it's windy, a thin water-resistant jacket. Good luck!

I've seen posts like that from other races and always wondered why anyone would try those things? It's so easy to check splits. Good luck at your race.

Wow I thought they'd just take the numbers from the chips at face value. It must be incredibly time-consuming to go through every single runner's results with a magnifying glass.

I don't know why people have to cheat; I feel guilty just cutting a corner in a race

I'm zero help on the wardrobe suggestion, I struggle with a 5 degree temp change. It always works out though...good luck with the race! :)

Wow! I had no idea people did this kind of stuff, and no idea race organizations had to waste time figuring things like this out - jeez!

I sure hope your weather isn't too terrible - damp + cold is indeed a bad combination. Whatever you wear make sure you've got a light rain-proof thing on top to keep you a bit dry! Good luck!

I hope you figured out what to wear and that the rain didn't happen.
Very interesting about those race scenarios. I read a story a few months back about a guy who cheated and even created his own fake race. It blows my mind the lengths people would go to to cheat at a running race. I like to earn my results!

Running in cold rain sucks. I do it up here in Alaska, a lot, and I've never found a way to stay truly warm. Usually I opt for a windbreaker and arm sleeves, which I pull down over my hands when they become cold. Wet is wet, though, and if I don't keep moving I'm in trouble.
But wow, people cheating in a marathon. If the Vermont marathon caught a few it's probably safe to bet that there are a couple cheaters in most larger races. Really sad. I hope the laws of karma bite them all in the behind.

I have a wind/rain top that I wear in cold and wet conditions. I don't easily feel the cold and only wear tops like this if they have some good ventilation. Wind is my worst enemy! Here in SA they often catch cheaters like that. One year a Comrades gold medal winner was caught with his twin brother running the first half and then they swopped the chip and race number in a toilet next to the route. There mistake...they wore their watches on different arms and this was picked up in race photos!