What Would Char Do?

I found myself in a little bit of a conundrum after my swim today so I stopped to think: "What would Char do?"  We all know Char is great at thinking outside the box as well as sewing up those beautiful costumes and baking those luscious looking cupcakes. So what was my conundrum?

I had been swimming again in Burlington at the Edge. I wasn't feeling the love for it I have the past few times but I got it done and loved the time in the hot tub after.  I was taking my shower thinking about tomorrow's outfit for school.  It may seem a little strange to be thinking about the next day's outfit so far ahead but tomorrow is the third of Teacher Spirit Wednesdays where we all dress up a certain way.  I use the word all loosely because I have forgotten the last two. Well sort of forgotten. The first one was Cool Dude day and I am so uncool I didn't have a clue how to dress up. Last Wednesday was easy- wear the school colors of blue and white.  I even have a volleyball t-shirt from a school team I was on that would have been perfect.  Nope, I forgot.  Tomorrow was originally pajama day which did not excite me but it got switched to.............Fitness Day!  I may have one or two things I could wear for that.  I will not forget this week. So while in the shower I was thinking I wasn't ready to wear shorts especially following today's snow storm.  But capris?  I love capris!  Then I got to thinking I should probably shave my legs which hasn't happened in quite some time.  When I got out of the shower I noticed blood streaming down my leg.  When you don't shave often I guess it's easy to nick yourself.
I can't use band aids any more as I react to them. I had no socks as I had worn my boots without them. I did not want to bleed inside my boots. I got most of the bleeding stopped but I just didn't want bloody boots.  So I thought for a bit (like Char would) and then remembered what I had in my swim bag.  I always carry extra underpants in case I forget them.  So I took them and stuffed them into my boot between my leg and the boot.  I'm proud to say they did the trick, no blood on my boot! And I remembered to replace them in my swim bag for when I need them! 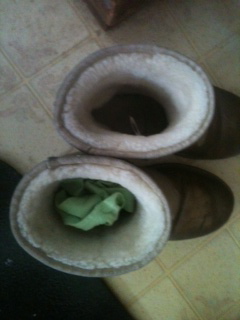 What a funny story! I'm glad you are enjoying your swims and hope your ankle heals up quickly! Post a pic of your fitness look for us...I wouldn't know how to narrow down all my choices!

Well done Macgyver. Desperation is the mother of invention in my book. But the most impressive thing about this story is that you remembered to replace the undies you'd used.

Haha, nice! Amazing how these blogs have connected some of us.

I love how you improvised! :)
I wished every day is Fitness outfit day for me. I would be a happier, more comfortable person!

LOL! - blogging is very educational, as well healthy for our declining brains!