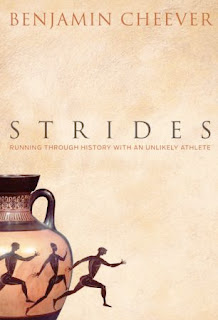 This  most recent book I finished that is my gym bag book. My gym bag book is often non fiction, sometimes about running but also likely to be a biography.  It is a book I can put down.  It may be a book that I was reading, couldn't get into and decided to make it my gym bag book rather than abandon it completely.  This theory is a foolish one because I only read while warming up, cooling down and the occasional break.  A book in my gym bag does not get read quickly. But back to the above book. I enjoyed this book a great deal. I liked the writing style (Ben Cheever, son of John Cheever)  He discussed many things running in a very entertaining style.  I am going to check with T and Emily. If neither of them are interested I will pass it on to one of you who wants to read it.  Next up in my gym bag: Running on Empty which I will review and also have a giveaway.
Scrapbooking
When I said that I made running scrapbooks on my last post, believe me I was using the word very loosely!  I have binders with plastic sleeves that I stick things in. They do not have prettily bordered pages with cute cut outs. There is nothing wrong with that, I just don't have the patience.
AJH, THE COACH
Unbelievably some women I work with have asked me to coach them to a 5K.  This discussion began over some adult beverages so I didn't think too much about it over the weekend.  But the talk was still going Monday morning. We have already met and planned our "first" race.  It is in early May which is not that far away but everyone is game.  I had thought July 4 might work but two of the runners will be gone.  One race was declared in too boring a spot so now we have a race where it is pretty and rather hilly. It is a race for a charity that I did last year and liked (the charity) very much.  We will run/walk together twice a week with everyone doing at least one more run/walk on their own.  Three of the women have very young children and time is an issue.  Some of us will do the local 5K on July 4 and I am planting the seeds of a late summer/fall race in their heads.  These are all great women and I can't wait to get started! They may not know it but I am not going to let them get away with only one race. 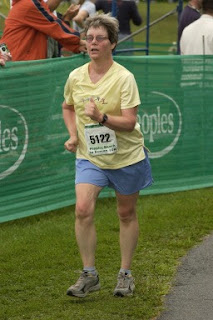 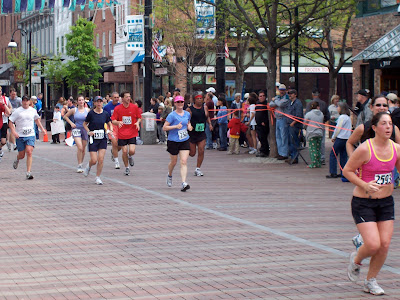 To a runner who ran races
(Second Vermont City Marathon -
pink hat/blue shirt - in heaven!!)
To Coach -  No Photo Yet!
Posted by ajh at 8:23 PM

This is all so exciting! I think you are going to do a great job coaching - you know what it takes to stick with running (this is, I think, the challenge for most people, bc running kind of sucks at the beginning) and make progress. I hope you will document the coaching.
I like your idea of a gym bag book - you end up finishing a book that you would otherwise not finish. WIN!

You will make a great coach!!! I was helping with a beginning runners group that started last March (Now they are running a half this Sat!). It was very rewarding!

Your progression over the years is awesome! You are a great success story and motivation for us all! I wish I could read books while on the treadmill or elipt, I see a lot of people do it and I'm jealous ... but I'm afraid I would break my leg!

Coach AJH - I love the sound! You're going to be awesome, I just know it!

Even your non-scrapbooking scrapbook sounds pretty cool to me. I am horrible at even putting pictures into a photo album so I think it's pretty neat. Design doesn't matter much to me.
The coaching sounds pretty awesome! I have a friend that just got into running this year and asked me to help her get started. I haven't given her an actual plan to follow or anything but I'm always excited to help people get started with running! I'm sure you'll be a great coach. :)

Wow! With your teacher skills to help you, coaching should be right up your alley!

Your type of scrapbooking is more my style. I love fancy scrapbooks, but I do not have the patience or creativity for it. That's so exciting about the coaching!

I love those conversations over adult beverages:) I think you would be an AWESOME coach and what a rewarding thing for you AND these women!! Definitely loving the picture progression! Looking forward to #3:)

This is what happens when you inspire people - you get to coach them! I'm sure you're going to find it really fun and incredibly rewarding.

yeahhhhhh you are a coach because you help others try something they are unsure about, so fun they asked you!!

Haven't read that book yet, but can't wait. love all my trunning books!

I haven’t finished a book in a very long time. It’s probably no excuse but I just don’t have time for reading a book at the moment. The coaching sounds great. They are in good hands.

This is so cool! They couldn't have got a better coach than you! Have fun with the training!

Don't know the book. At the moment I'm reading a bit less but it will come back once it's weather to sit in the garden in the sunshine, that's when I like to read a lot.

Wow, what a great idea! I bet you'll be a fantastic coach. Hope you enjoy it too.

This is so cool! You are such an inspiration and I just know you will be an awesome coach to those ladies. Lucky them :)

If you decide to send that book to someone, I'd love to read Strides :) :)
As you may have noticed on the list of blogs for the virtual book tour, I also get to review Running on Empty. How lucky are we!

What a perfect fit for you - such a great way to pass along your love for running AND provide inspiration for your friends!!!

Coaching is a great idea - you're an encouraging, inspiring runner! Have fun with your new project!

Good luck to you and your new running partners! I hope they enjoy it as much as we do!

You would be a great coach! You are so dedicated (we have all seen the crazy running in thesnow pictures), I am sure you would give your "coachees" the same level of dedication. Wonderful!

I think you will make an awesome coach! You have all the qualities of a great coach: dedication, inspiring, determined, and encouraging! Your friends are blessed to have you!

That's so great that you are going to be coaching! sounds like fun. I love that you said, "They may not know it but I am not going to let them get away with only one race." ha! That's awesome.

How wonderful that you'll be coaching some of your friends! You're already inspiring them, and now you'll be giving them the tools to inspire others.

I'm kind of the opposite of you on my gym bag book. One that doesn't GRAB me won't distract me while I'm on the elliptical (NOT the treadmill...I've tried and just can't do it) or bike.

And I love the idea of a "gym bag book".

I think you'll make a fantastic coach! Have fun with it.

I can totally see you as a coach, what a great experience it will be for all of you!

that is so exciting! you will be a great coach :)

You would be so wonderful at supporting new and experienced runners, you are so inspiring! Keep us posted on your adventures.
Our friends are the ones who are engaged, my daughter is already married!
Hope to see you in Boston!

You'll be an awesome coach.

I do photo albums the same way you do scrapbooking. :) Simple is best.

How cool you are going to be coaching! I might also be helping someone run her first 5K, if I can get her over her fear of doing it...we shall see.
Anyway, you made me think of one of my favorite sayings, which is:
"To know, read.
To learn, write.
To master, teach."
Good luck!

Love the pics! How nice they want you to coach them!! BTW, I won't be running CB, but am running another smaller 10 miler the following weekend. I'll be out spectating at CB, so if E is running, I'll try to get shots of her!

Sherry @ Life from my persective said...

If you still want in on the Run for the bling of it challenge just send me an email with the link to your blog as well as individual links to each of your races this year. I will add you. runfortheblingofit at gmail dot com Would love to have you!