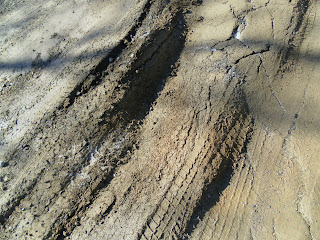 These ruts were frozen this morning but when
it warms up, look out!
Saturday I nailed my pace run. I needed to run 5 miles at a 9:30 pace.  Friday the weather was beautiful and very spring like.  Today when I got up what was it doing?  If you are thinking, snowing you win the prize. I did not feel like I had won any prize.  I got dressed accordingly - no capris this weekend like last weekend in DC - and headed out. T is gone to visit her son so I was on my own.  The roads had only a few icy spots so that improved my chances of hitting my pace.  My first four miles were great with the last one being  a bit slower. I actually ran these five miles faster than the five miles I ran last Sunday in the St. Patrick's Day race.  For me that is amazing as races really do get me to push it much more. But last Sunday I was not rested and yesterday was   a rest day for me.  It felt great all the way around.  Even though I was disappointed in the weather, later in the day when I headed into school for a few hours to work on report cards, I was glad it was cold out.  That is rather selfish of me, but it's how I felt! 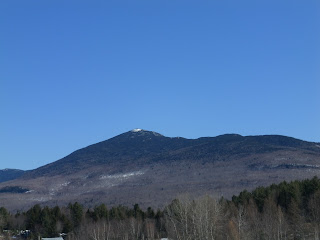 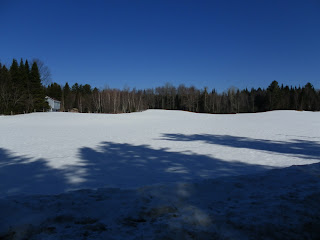 Okay now it is Sunday the first day of spring. I'll get back to that fact.  I had an 11 miler on taps with no T here to run with me.  I took my time getting going as I am just plain sick of the cold and I wanted it to warm up. By the time I left it was in the high 20s but don't worry, it took me so long to run this 11 it warmed up just fine.  I still am wearing long pants, two layers on top (one fairly thick), gloves and a fleece headband.  When I am finally in short sleeves and capris you will hear my hallelujahs all over the country.  So because I was running alone I had my Ipod and caught up on some podcasts.  I must say from listening to them I now have a new item on my bucket list. I am so going to do that Goofy Challenge some day.  It probably won't be until I retire because it totally doesn't fit into my school calendar but it will happen.  I ran these miles rather slowly. I wasn't feeling the love right from the start.  I never was completely dying but there wasn't a whole lot of enthusiasm either.  I stopped to take a break take pictures quite often. 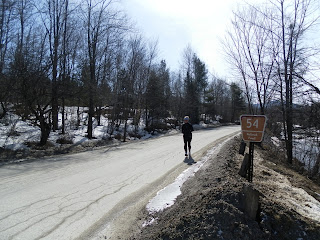 Even the paved roads are in tough shape.


I saw some ducks that were rather amusing.  They would swim upstream, turn around and ride the current down.  They did this several times like little kids playing in the water. 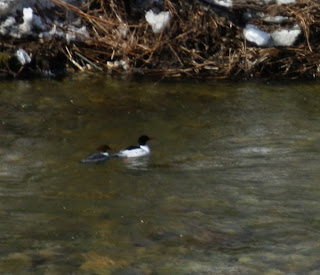 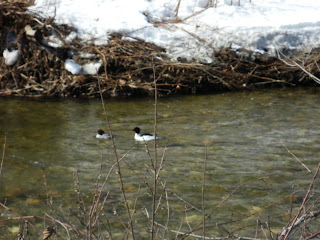 I also saw a weasel after something in the road. I tried to take a picture but once he saw me he was gone fast.  I also had  a dog come after me. T would have died!  I thought I knew where all the dogs are on the route. This guy appeared out of nowhere but when I turned and yelled he stopped.  He would start after me again but if I turned and glared he instantly stopped so I wasn't worried and just continued.  Finally I was back on home stretch with 11 in the bank. 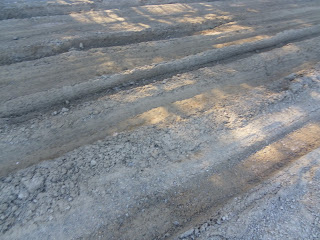 I had to watch my footing as if
I was on a trail. 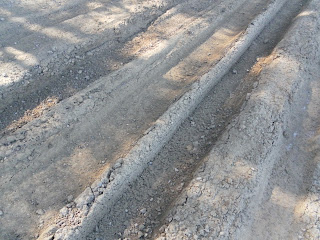 Okay back to spring.  It is my least favorite season especially this part of it.  Right now everything is mud mud mud.  Our driveway is a mess. The roads are a mess. I tried to take a picture of the ruts. The pictures don't do them justice. Some roads become impassable.  The weather.  Friday - when I was at work - was quite nice. Saturday and Sunday let the colder temps return. What did I get in my email an hour ago? A WINTER WEATHER ADVISORY.  If you look at the forecast for the coming week, there is snow pictured in the next 5 days.  This is spring?
Posted by ajh at 9:30 PM

Boo for still having snow and a Winter Weather advisory - that sucks. It's finally warm here - hopefully you will get warmer weather soon!

I am so over the snow and ready for spring to be here to STAY - mud and all!

Sorry about the snow - guess we won't post our weather forecast. Of course, that just means earlier snake season for us, so you aren't missing out on EVERYTHING ;-) Have a great week despite the snow...

That snow was so dirty...I'm not used to seeing brown blechy snow!
Great job on the tempo run and the long run!!
Spring will soon be here, I promise!

Those ruts look awful. Treacherous. Good job pushing through that 11 today. I know what you mean about being a little glad for the lousy weather when you have to be inside...at least you aren't missing out!

Yes, I'm a special ed teacher. We have two very set in their ways regular ed teachers retiring either this year or next year, and then I'm going to try and get some cooperation for the co-teaching idea from those fresh young faces that come in. :)

Great runs this weekend! I also love the pictures. You are so fortunate to run near breathtaking locales!

We've got major puddles around here, with the snow melting. Minnesota will be hit by major flooding this year, unfortunately.

The animals are a good indication that change is on the way. Roll on the next season. This one is overstaying its welcome.

Boo for more snow - enough already!
And wow - you are going to do the Goofy challenge - that is an impressive goal! I'm curious - what podcast made you decide to do it? You'll love the course - I've done the half there twice and it's a lot of fun.

Nothing seems to stop you. Great runs.
Hope the forecasters are wrong though my impression is they err more when they predict nice weather.
I am also curious about what podcasts you are listening to.

I wish I could send you some of our warm temps! I like to read your reports because nothing stops you, you just keep on running!

What podcasts do you listen to? Which one gave you the Goofy inspiration? It's a great idea! It'll be a fun goal to have in mind.

The ducks sound adorable! It does seem like they were playing in the stream. The dog would have scared me to death.

Good luck with the snow. Hang in there...spring has got to be here soon!

Our roads look so similar... New England- you are the pits! (or the ruts? the mucks? boooo!)
Are you running the Great Bay Half in a couple weeks? Seems like lots of us New Englanders are gearing up (thru snow and impassable roads) for that particular race. We are all crazy!

That blue sky looks so beautiful you must be due for Spring to arrive soon!

beautiful running scenery you have there!

I am so sorry that you have snow on tap this week. That is no fun at all!

You are a trooper to make it through spring like that! But you do have spectacular summers in a beautiful locale, so soon you will reap the benefits. Keep the great pics coming!

We're having snow too!! Never thought I'd hear you say you're sick of the cold LOL.

Well done on the runs this weekend. I had to look up what the Goofy challenge was and am impressed but sure you can do that.

Girl you should come over here, I bet you are going to like Spring again. It's the most beautiful Spring day today and I can't wait to go home and take Bella for a walk.

Those are some nasty ruts, very hard to run in. Good job persevering out there alone! And yeah, 71 here today but chilly the rest of the week....I am so ready for spring!

I don't like your spring either!! Goofy is doable as a teacher... Just use your timeoff early :) it's such a fun event! Err, eventS rather.

Dear Vermont,
Get a clue. It's March 21. No more snow. No more freezing temps. Andrea is tired of your winter business mkay?
Thanks.

First congrats on that sweet 5 miler and for toughing it out on that 11 miler. Hope you get a spring that sticks soon!! :)

GOOFY IS THE BEST! If I could do more marathons, I would do it every year. There is nothing as fun as doing that and getting that sweet-a$$ Goofy Medal.

We have snow in our forecast too! Ickk spring muck! My kids still have to wear snowpants but they are all muddy and wet and the driveway is trash and the shoes are caked and I could go off on a major whinefest but FORTUNATELY it is no longer -40.....

Stopped to take pictures quite often-ha! Nice work on the runs!!!

Boo to snow and mud and anything that offers dicey footing! I too am entertaining the possibility of The Goofy some day.

Spring is awesome. The days are getting longer. It's warming up. You should get some trail shoes for that mud. BTW, did you know the record for the lowest high temp in San Diego is 50 deg. That's right it gets to 50 every single day here. You should move. We can be neighbors.

I totally agree with you on Bill Clinton - amazing charisma!
I don't really listen to any podcasts, that's why I was wondering...I need to get my kids to help me figure out how to put them on my music player...can't be that hard, right?

You always have the best pictures! I haven't tried podcasts but love listening to books on my ipod when I run. On the long runs it really seems to help distract from the mileage. You absolutely should do the Goofy. I love he Disney races. They are so expensive but absolutely fantastic!

Nice work on the tempo run!! And getting your 11 in during that crazy weather!
After my own encounter with a boat load of mud on Saturday, my heart goes out to you ;) Crossing my fingers the weather starts cooperating soon!

Snow is crap in March! Sorry it won't go away for you :( We've entered the build-an-ark season here. It's going to rain for the next 2 weeks. Boo! And it's cold rain so I'm not up for growing lady-balls just yet to run in this stuff.