Do you remember those mud photos I showed you? 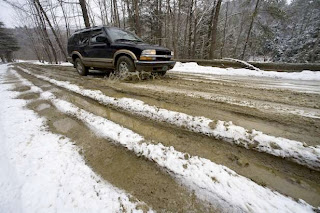 Okay, not really.  I saw this today and thought, "Oh, man. I should have sold my mud photos to finance all those race destination trips I want to make."
The above photo and the following two are really taken by: /Photos by John Churchman
The stock-photo photographer for Corbis, Getty and Photolibrary, among others, has sold a muddy-road photo to Subaru for an advertising campaign the automaker recently launched for its four-wheel-drive vehicles. Churchman declined to say how much he was paid for the shot but said it was in the thousands of dollars. 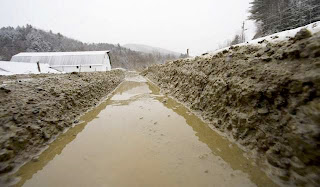 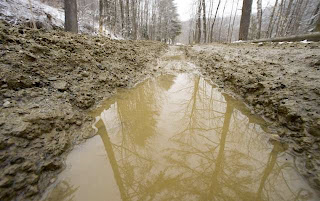 And just in case you thought I was kidding about the mud, look at these pics.
Right now though it is not  a problem one little bit because what is it doing out?  It is snowing. What was on my car this morning? Snow.  What was it doing Monday?  Snowing. Why did the kids come in early from recess, yes early from recess?  Because it was too dang cold!  What is it supposed to do Wed. Thurs and Fri?  Snow.  So for now, mud is not a problem other than the huge ruts that are frozen into place on the roads and the huge potholes threatening to swallow any car smaller than an army tank.
I promise next time I post, I will not complain about the weather.
Posted by ajh at 8:01 PM

Complain away! THAT is worth complaining about!!!
We can complain with you about the gale force winds that won't stop here!!! :-)

Oh, my goodness. I agree with Happy Trails. Complain to your heart's content...bc you know you'll be hearing us all whine about the heat come July!

Uck. That is nasty mud.

That's mud you could get bogged in.
And while we're complaining about the weather, I'd like to say just how stinking hot it's been here all week. We've had the hottest days all Summer ... but it's Autumn.

Wow. I can't believe you guys are still getting slammed with snow! It's spring! I just read a facebook update from a teacher friend in PA about maybe getting a delay or a day off tomorrow and I had to check the weather to figure out what she was talking about. I'm sure Vermont is even worse. I'll be thinking springy thoughts for you!

I would totally still be complaining about the weather. Not cool - it's Spring right?

Maybe spring will hurry up if we keep complaining. :)

Right now where I live, it's pouring freezing rain. Driving home from small group tonight was definitely less than pleasant!

That is unbelievable mud! Sorry about the snow!

Will it make you feel better to know our trails here are mud too? It is the kind of mud that sticks to your shoes like cement and makes them weigh a ton.
I wonder if I could make a photo of my muddy trail runners and sell that photo to the shoe manufacturer. Hmmm
Do Vermont weather people know spring started a few days ago?

Wow, your winter is really persistent. At least this explains why you are all so tough. You are certainly one of the most hardcore winter runners I know.

OMG - I can't believe you are all still getting snow! It's spring already!

OMG, SNOW??? Ugh, I'm so sorry! We're having a lot of rain here. Spring will be well earned this year!

Stupid weather! Stupid mud! I've had it too- and your dirt roads look even worse than mine.... BOOO!

Who would know?! Sorry about the mud and now snow. Yikes! Come to MS for hot running!

You may still complain about the weather Andrea, I know that when I had the same conditions as you have right now I would definitely complain!

If I lived there I would spend my entire life complaining about the weather. You are very patient with it!

I would be complaining about your weather in November so you're doing a great job hanging in as long as you have! It'll soon pass (well, let's hope :)).

I'm Sorry about the snow ... again.
It's spring time and I hope you'll have a sunny weather soon!

Those photos are definitely worth of an off-roading ad. Holy mud!

I wouldn't have thought to do that... Noted, in the event there's ever crazy weather down here ;)

that mud is scary looking. I feel like a broken record about the weather too. It's snowing right now. AGAIN.

Mud is a crazy thing, but I love it. Sorry I haven't been by in a while, but love your posts and will hopefully get back up to speed with reading more regularly.

Boo! Growing up I always thought the seasons changed after christmas...guess that's what a childhood in California will get ya.

Hang in there it'll get better, right???